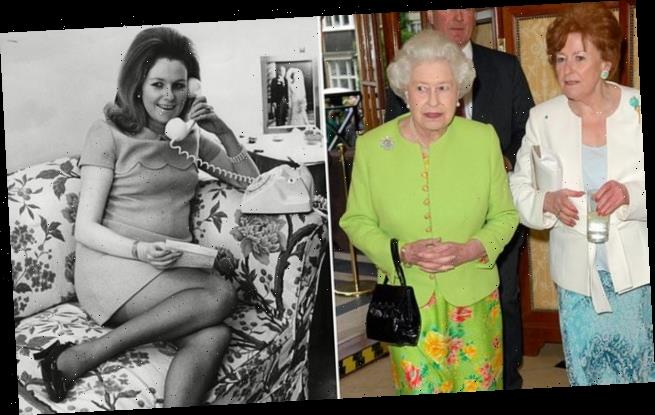 The Queen of party planning: As the monarch’s cousin Lady Elizabeth Anson dies at 79, RICHARD KAY recalls a relationship that went far beyond ties of kinship 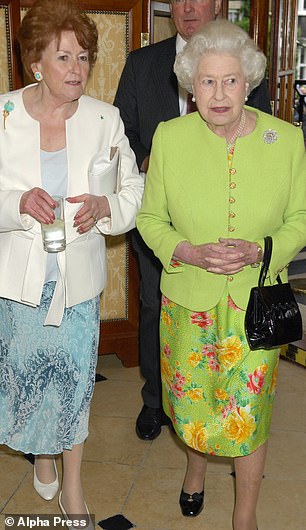 When the Queen came to call on her cousin Lady Elizabeth Anson for dinner once a month, the house in Notting Hill echoed with laughter, family gossip and memories

They spoke on the phone at least once a week, sometimes more often but never less. Two women so close that it was said they could finish each other’s sentences.

When the Queen came to call on her cousin Lady Elizabeth Anson for dinner once a month, the house in Notting Hill echoed with laughter, family gossip and memories.

But the relationship between Lady Elizabeth, London’s queen of party-planning, who has died at the age of 79, and our monarch was bound by far more than the blood ties of kinship.

Although Lady Elizabeth — Liza to her friends — was royally connected (her mother, a Bowes-Lyon, was a niece of the Queen Mother), she occupied a much more formidable role in the Queen’s life as one of the last of a dwindling band of real friends.

Although 15 years separated the two women, Liza had in recent times become perhaps the person closest to the Queen’s life outside her own family.

But then, of course, Liza Anson really is one of the family. Born at Windsor Castle during World War II and with King George VI as a godfather, she grew up surrounded by, and on first name terms with, the royals.

‘When I was a child, he seemed immensely tall. But I didn’t know he was the King,’ she recalled. ‘They [George VI and Queen Elizabeth] very kindly used to let us play in their private gardens, Frogmore Gardens.’

When she married, the then 20-year-old Princess Anne was a bridesmaid, and her society cameraman brother Patrick (the Earl of) Lichfield, who gave her away, was — along with the Earl of Snowdon — the royals’ go-to photographer.

Years later Lady Elizabeth reflected on how much she had in common with the late Princess Diana. ‘We both came from broken homes; both spent our childhood close to a brother who grew up to become an Earl; and both suffered later in life from an eating disorder.’

One might add to that list. Both subsequently married and divorced. Both had intensely social lives and worked hard for charity. But there the resemblances end.

In fact, Liza, with her bouffant of immaculately coiffed auburn hair, was no fan of Diana’s behaviour and was fiercely loyal to the Queen (her first cousin once removed) as Charles and Diana’s marriage disintegrated so publicly. 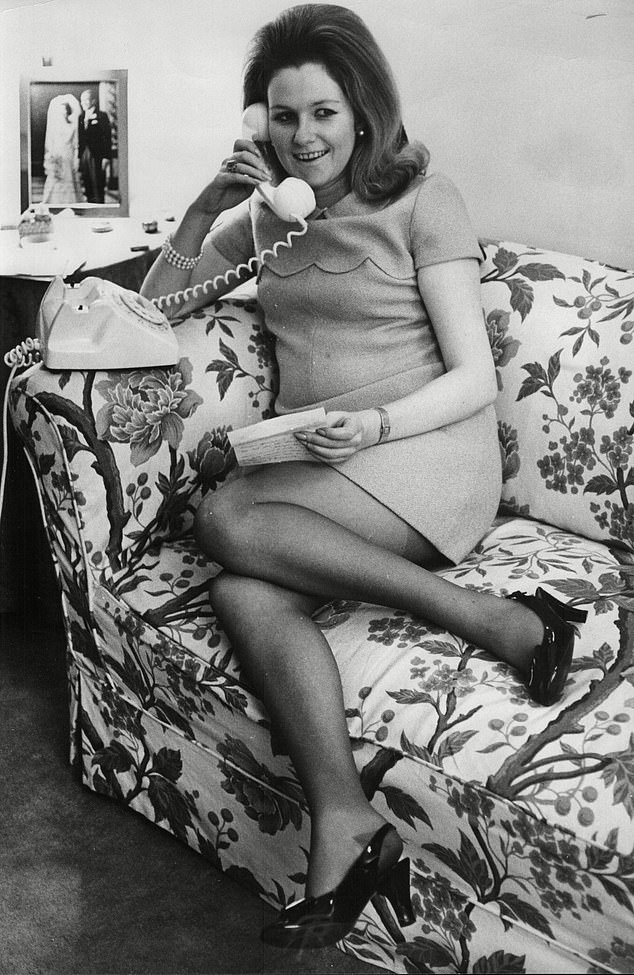 Although Lady Elizabeth — Liza to her friends — was royally connected (her mother, a Bowes-Lyon, was a niece of the Queen Mother), she occupied a much more formidable role in the Queen’s life as one of the last of a dwindling band of real friends

And she’d had a ringside seat from the outset. As the doyenne of party organisers, it was Liza the Queen asked to organise the post-wedding party that followed the Prince and Princess of Wales’s marriage in July 1981.

It was a black-tie affair in the ballroom at Claridge’s in Mayfair and followed soon after the newlyweds had departed from Buckingham Palace on the first night of their honeymoon.

Lady Elizabeth had a keepsake of that night: a photograph of the Queen, Nancy Reagan, wife of the then U.S. President Ronald Reagan, and Princess Grace of Monaco sitting side by side on a sofa glued to a recording of the wedding ceremony which Liza had miraculously spliced together in the few hours since the ceremony.

The photograph, along with those of countless royal events had pride of place in Lady Elizabeth’s home which doubled as her office. For almost 60 years she presided over London’s party scene with a ruthless efficiency. From royalty to celebrity her business, Party Planners, organised the capital’s best and most lavish celebrations.

She hosted bashes for everyone from Baroness Thatcher and Sir Mick Jagger, to Tom Cruise and Bill Clinton. Weddings were a speciality: there was pop star Sting’s to Trudie Styler to the slightly more reserved nuptials for Crown Prince Pavlos of Greece (to heiress Chantal Miller).

When Prince William married Kate Middleton in 2011, the Queen asked her to organise a party for all the visiting royal guests.

By then she was, of course, a veteran of royal party planning. No palace event, it seemed, was complete without input from Lady Elizabeth. She arranged the Queen’s 80th birthday party and that to mark the 50th anniversary of her coronation.

All the same, Liza knew that her royal host would be taking a close interest in all the details. ‘People might think she wouldn’t have time to worry about menus and tastings and how things look, but she is the most meticulous host,’ she once said.

‘She is really interested in what people are going to eat or when they are going to get drinks and making sure that they are not waiting too long.’

Only once in her long career did things not go according to plan — when she was sacked (and later reinstated) while working for the Qatari royal family.

She was working as a publicist for Sheik Hamad Bin Abdullah Al Thani, cousin of the Emir of Qatar, during Royal Ascot in 2014. It was reported that a tearful Lady Elizabeth was sacked on the spot because the Qataris were furious at not being offered a place in the Queen’s carriage. She later revealed the real reason was that she failed to answer her phone.

Lady Elizabeth said: ‘There has been a lot of very hurtful gossip about what happened,’ she said. ‘Yes I was asked to leave, but it was all over a huge misunderstanding and when the Al Thanis realised what had happened I was reinstated immediately.

‘The Sheika was unwell and had to go home. They had been trying to call me on my mobile but it was turned off as I was working for Her Majesty. They thought I was ignoring them over a vital decision they had to make.

‘They had temporarily forgotten that when I am working for the Queen my mobile is switched off.’

Lady Elizabeth was four and her adored brother, who died 15 years ago, six when their parents divorced. ‘Sadly, I never knew them together. As a child, I could never say Mummy and Papa in the same breath. I used to envy all my schoolfriends who could take that for granted.’

Her mother went on to marry Prince George of Denmark, a Danish diplomat, with whom she lived mainly in Paris. Their soldier father was often stationed abroad, so the two children spent many years being shunted round elderly relatives, moving between Scotland, Devon and Shugborough, the family seat in Staffordshire.

‘The one certainty was that Nanny came, too. Also, they never tried to separate Patrick and me.

‘We spent only one holiday apart, and then we were both utterly miserable. We became very close and dependent on each other. I was 16 when my father died, and Patrick succeeded to the title.’ In 1959, two years after official Court presentations had stopped, Lady Elizabeth did her coming-out year as a debutante.

‘The build-up was terrifying and I used to feel physically sick. To begin with, I wasn’t sure if I wanted to do it, as I was desperately shy. I’d had to organise my own party because my mother was in Paris and that gave me the idea of doing Party Planners.

‘I started the company and it was a success from the beginning, entirely by word of mouth. My first job was a coming-out party for 350. I charged £5! I used to borrow Mummy’s hats to look more grown up when I had to talk to banqueting managers in big hotels.’

Her eating disorder started rather late, when she about 20. It was caused by two things: a broken home and her brother. ‘He had this very extraordinary and cruel habit of saying, whenever he introduced me: ‘Do you know my fat sister?’ she revealed later.

‘I developed bulimia and, being a great foodie, thought I was extremely clever to have invented it. I had never heard of anyone else having it. Even at 5st 11lb — which is what my weight dropped to — I’d see myself in the looking glass and think I was huge.

‘First, they thought I had leukaemia. Nobody knew about bulimia in those days. Finally, after going from hospital to hospital, I went to Switzerland with my mother to consult a wonderful old professor. He told me: ‘You have three weeks to live.’ ‘

Lady Elizabeth was put in a ward, where she was watched day and night by nurses to see that she ate the prescribed food. Gradually she gained weight and, when she had reached 7½ st, she was allowed to return home.

In 1972, aged 31 (which in those days was considered late for marriage), she met her future husband, Sir Geoffrey Shackerley, like her brother a photographer. ‘We met on the pavement outside Covent Garden Opera House. We had both arrived late but found ourselves in the same party.

‘We got the giggles when part of the scenery began to collapse. After that we fell in love very quickly and he proposed the third time he took me out, which I thought was mad.

‘I turned him down, and then got terribly worried when he didn’t ask again. First he proposed in April, then again in June, and we were married at the end of July.’

Her husband, nine years her senior, was a widower — his first wife was actress Virginia Maskell — with two small sons.

They were married in Westminster Abbey, with the Queen, Queen Mother and Princess Beatrix of the Netherlands among the guests. Needless to say, Lady Elizabeth organised the wedding.

‘It was the most wonderful day of my life. My brother, who gave me away, was a bundle of nerves but I was icy calm.’

The following year, in 1973, their only daughter, Fiona, was born, but in the late 1980s Lady Elizabeth and Shackerley parted. They quietly divorced in 2009.

In the late 1980s Lady Elizabeth contracted ME, the debilitating flu-like illness. It gave her, she said, ‘a fuddled brain, a stammer, and desperate depression’.

It upset her hugely that people mistook her symptoms for drinking. But neither ill health nor a huge loss at Lloyd’s in the insurance crash of the 1980s, ever dented her ambition or her drive.

She simply trimmed her outgoings — wearing outfits from Marks & Spencer — but allowed herself one luxury, gulls’ eggs, saying: ‘They’re only in season three weeks of the year.’

For the Queen the loss of such a close and plain-speaking friend will be immense. And parties without Liza will never be quite the same again.