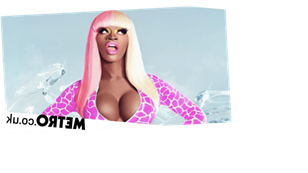 The competition for best celebrity Halloween costume has kicked off – and Lil Nas X is already doing the most to be at the top of the pile.

The Old Town Road star has dragged up to emulate Nicki Minaj this Halloween, and we are gagged.

The 21-year-old channelled Nicki by dressing up as her in the video for her 2011 Super Bass, and it’s a total serve.

And to add to the Barb fantasy, the rapper used prosthetics to get that Minaj body, with a whole lot of cleavage filling out that catsuit.

Not content with sporting the look in his living room, Lil Nas X went all out, straddling a motorbike made of ice for his Halloween reveal photoshoot, just like Nicki in Super Bass.

He captioned the pics: ‘NAS MARAJ’ – throwing it back to his pre-fame fanboy days.

Before he was out winning Grammys, Lil Nas X ran a Nicki Minaj stan account called @nasmaraj, and claimed responsibility for the account back in June, explaining he didn’t own up to it previously as ‘i didn’t want people to know i was gay tbh’.

After one comment argued that being a Barb (the name for Nicki’s fans) doesn’t make a person gay, the Panini rapper replied: ‘it don’t but people will assume if you had an entire fan page dedicated to nicki u are gay. and the rap/music industry ain’t exactly built or accepting of gay men yet.’

Nicki herself chimed in, tweeting: ‘’It was a bit of a sting when you denied being a barb, but I understand. Congratulations on building up your confidence to speak your truth.’

Lil Nas X responded: ‘the generous queen, i love u. and i’m sorry i did that in a time where u were already getting so much bandwagon hate.

‘i felt so bad, hoping u wouldn’t see my denial. i was just so afraid of people finding out about me and losing everything before i even got a chance.’

However, the star has received some hate for his excellent costume, with some arguing that Lil Nas X is enforcing stereotypes about gay men by getting into drag.

The star, who came out as gay at the end of Pride Month last year, isn’t going to stand for the criticism, though.

Lil Nas X singled out a reply which read: ‘Nah, so because people dont like this, its makes them a homophobe lol. Im gay and I dont like it either. He came on the scene like he was repping Gay masculinity, showing us in all forms, now he dressed as Nicki Minaj. Same old s***, same stereotypes, different day [sic].’

The hip-hop star quote-tweeted: ‘bro i’m gonna do whatever tf i want to whenever i feel like it, i’m not sorry because i ruined ur masculine gay n**** fantasy.’

We simply have to stan.