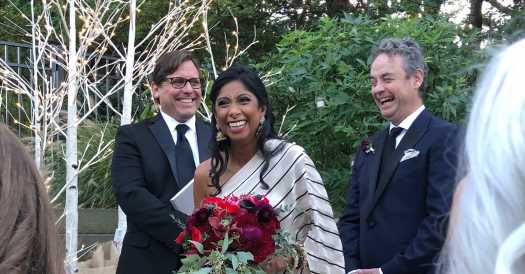 A few matters might have stood in the way of a relationship between Mallika Pereira and Dr. Kennedy Cosgrove. She is a committed planner and he said his best friend in medical school referred to him as “Mr. TBD.” She lived in New York. He lives in Lafayette, Calif.

But from the first moment he saw her, in June 2018, Dr. Cosgrove, 51, felt drawn to Ms. Pereira. She had just arrived at the Saturday birthday party of a mutual friend in East Hampton, N.Y., while he had just emerged from the pool. Dripping wet and in swimming trunks, he headed right over and introduced himself anyway.

They quickly covered the basics. She is a vice president for partnership marketing at Major League Soccer in New York, and he is co-chief for psychiatry at Kaiser Permanente Medical Center in Oakland, Calif. She noticed that every 15 or 20 minutes, he’d show up at her side again to continue chatting.

Her friends noticed too. One said, “He likes you,” to which Ms. Pereira, 45, responded, “Yeah, yeah, yeah, he lives in California.”

Nonetheless, she noticed when he chatted with another woman at the party. “I got jealous,” she said.

On Monday morning, back home in Lafayette, Calif., he texted her and suggested that they keep in touch.

Their exchanges soon became telephone conversations, and when she had a trip to Los Angeles in August, for another friend’s birthday, he seized the chance to see her again. They had an official first date.

“It went well, so I was included for the rest of the weekend,” Dr. Cosgrove said. “It really didn’t feel awkward. It felt so strangely comfortable.” 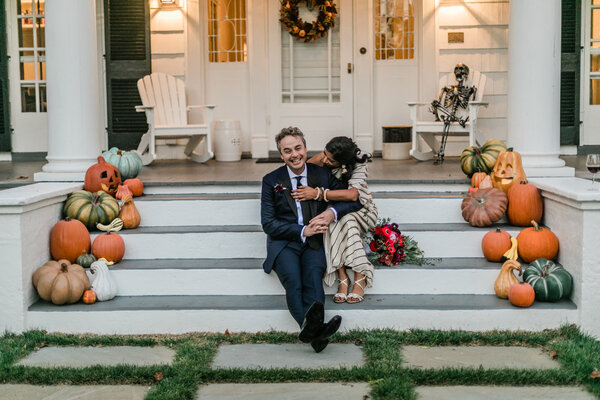 They shared their first kiss that evening, and before the weekend concluded, they made plans to see each other again in a few weeks, this time in New York.

In September, while in New York, Dr. Cosgrove knew he was falling in love. “We spent the day on the Great Lawn in Central Park and it all just clicked for me,” he said. “I just felt so happy, and certain. Mallika’s optimism and energy and her extroversion really matches mine.”

A month later, when they saw each other again, she realized she was in love, too. He had been talking about a friend’s 50th birthday party, which was to be in Argentina, and, despite his disinclination to plan, he asked her then, fully six months in advance of the event, if she would go with him.

“He stepped out of his comfort zone to step into my comfort zone, and I loved it,” she said. “That day, we went online and booked tickets, and I was like, ‘I love this man.’”

The couple married on Oct. 17 at the home of friends, Taryn and Robert Phelan of Middletown, N.J. Mr. Phelan, who is a Universal Life minister, officiated.

Originally, before the coronavirus pandemic, the couple had planned to wed in New Orleans, with about 250 guests. Their ceremony ended up including 19 people altogether. About 40 people watched over a livestream link.

It turned out that the things that might have kept them apart — distance and their radically different approaches to planning — ended up easing their transition to a life together.

In March, when her office closed for two weeks because of the pandemic, Ms. Pereira packed her standard carry-on bag and headed to California. Dr. Cosgrove, who is divorced and has a 13-year-old daughter, suggested that Ms. Pereira perhaps might think a little more long-term, and, for once, he ended up being the one with foresight. They didn’t make it back to the East Coast until their wedding, seven months later.

And as for the distance, Ms. Pereira said that it gave her room to ease into a new way of living.

“I’ve been single for the majority of my life, so long-distance allowed me to maintain my independence, but slowly move into what a committed relationship is about,” she said. “It felt like the right way.”