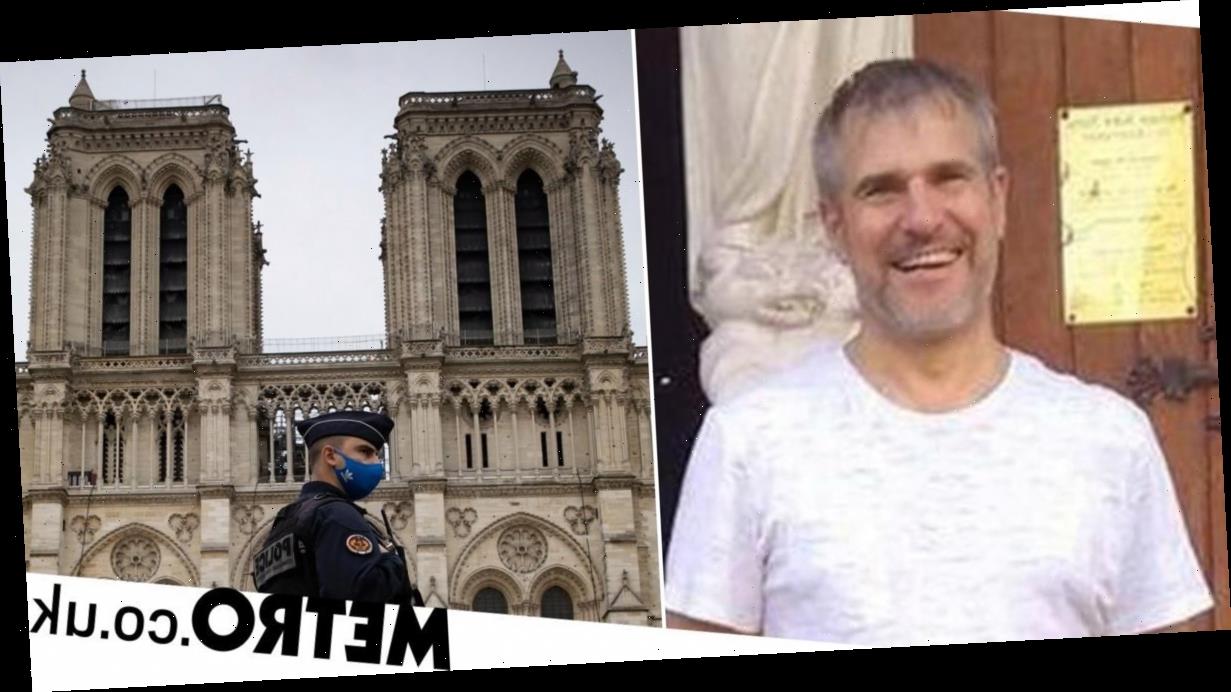 One of three victims of a suspected terror attack in the French city of Nice has been named as Vincent Loques, 45, who was a sacristan of the Notre Dame basilica.

Mr Loques was beheaded by the attacker, who also killed two women at the church.

The assailant, armed with a knife, was shot by police and French authorities have opened a terrorism investigation.

He has been named as 21-year-old Tunisian migrant Brahim Aoussaoui.

The first victim, who was also beheaded, is thought to have been an elderly woman who had come to the church to pray.

Aoussaoui then attacked Mr Loques, before stabbing a second woman who escaped across the street but died of her injuries.

Nice’s mayor said the attacker repeated ‘Allah Akbar’” over and over as he lay wounded after being shot by police.

Christian Estrosi confirmed that ‘everything about the incident’ suggested a terrorist attack.

French President Emmanuel Macron has announced that he will more than double the number of soldiers deployed to protect against terror attacks.

Mr Macron’s decision to increase deployments from around 3,000 to 7,000 came hours after the stabbings.

The killings put France on its highest level of alert and come at a time of extreme tension over the republication of caricatures of the Prophet Mohammed by the satirical newspaper Charlie Hebdo.

Prime Minister Jean Castex told French lawmakers that the country would raise its alert level to ’emergency’ in response to the attack. Mr Macron later travelled to Nice to meet police officers in the city.

The suspect was believed to be acting alone and police are not searching for other attackers.

Images on French media showed the neighbourhood locked down and surrounded by police and emergency vehicles. The killings took place less than half a mile from the site in 2016 where another attacker drive a truck into a Bastille Day crowd, killing dozens.

Shots punctuated the air and witnesses screamed as police stationed at the grandiose doors to the church appeared to fire at the attacker inside.

Sounds of explosions could be heard as sappers exploded suspicious objects.

Later in the morning in the southern city of Avignon an armed man was shot dead by police after he refused to drop his weapon and a Taser shot failed to stop him, a police official said.

And a Saudi state-run news agency said a man stabbed a guard at the French consulate in Jiddah, wounding the guard before he was arrested. It was not immediately clear if the incidents were linked to the attack in Nice.

There have been increased tensions in France over caricatures of the Muslim Prophet Mohammed published by satirical weekly Charlie Hebdo, and after two other recent attacks in the country with links to the cartoons.

Less than two weeks ago, an attacker decapitated a French middle school teacher who showed caricatures of the Prophet Mohammed for a class on free speech. Those caricatures were published by Charlie Hebdo and cited by the men who gunned down the newspaper’s editorial meeting in 2015.