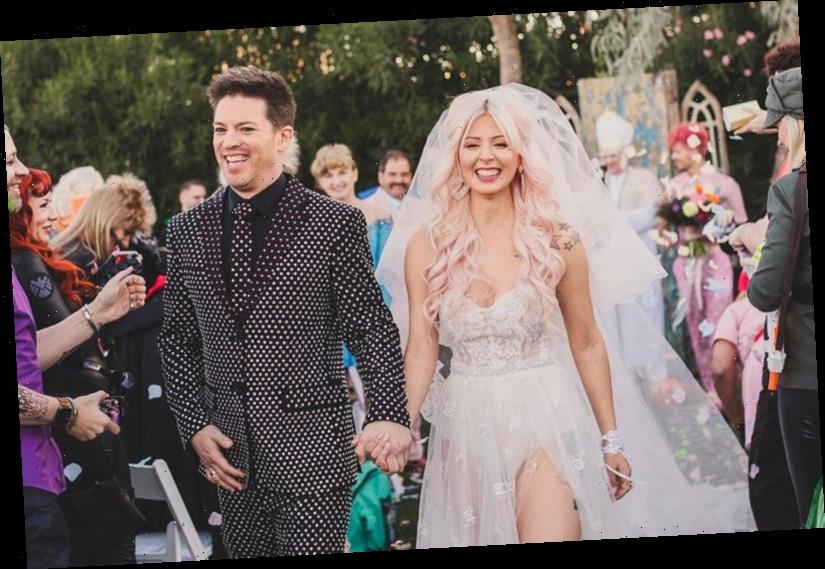 J.D. Scott is celebrating one year as a married man with a sweet letter to his wife, Annalee Belle.

Sharing the message in an Instagram post on Thursday, the 44-year-old HGTV star — who is the older brother of Property Brothers' Drew Scott and Jonathan Scott — professed his love for his wife on their first wedding anniversary.

The pair tied the knot in an over-the-top Halloween celebration in Las Vegas.

Noting in the caption of his Instagram post that he was planning to share the letter on their actual anniversary on Saturday, J.D. wrote that he sensed his message was something that Belle, 30, could "use a couple days early."

"Thank you for everything my love and never mistake that you are alone in this great, big world," he said in his caption. "We’re a team, no [matter] how many years we have been married." The TV personality reflected on "how fortunate I am in a world full of so much anger and selfishness to have found such a beautiful spirit as yours. And twice as fortunate that you in return love me for the man I am over the one I could be."

"Every day I can feel your devotion which feeds and fills my heart," he continued. "Your soul is so brilliant that it makes me want to believe in a divinity with purpose and compassion. A universe where every moment, decision and path brings two parts of one bright light together at last."

Concluding his message, J.D. noted that their first year of marriage has seen "unprecedented hardships around the world," but he said that "not even the darkest night could put its cold hand on our love."

"With you by my side," he finished, "I know that…anything is possible." Last October, J.D. married Belle on Halloween in a ceremony with a 1940s and 1950s vintage movie theatre theme.

Held at a private home in Las Vegas, the décor included a '50s candy shop, absinthe fountain lounge and photo trailer, and all of the guests in attendance wore Halloween costumes portraying famous movie characters. Jonathan attended the festivities with his girlfriend, actress Zooey Deschanel, who made their relationship Instagram official earlier that month. The pair dressed in a couple's costume as Batman and Catwoman for the night.

Drew and his wife Linda Phan also donned a coordinated look, dressing up as Woody and Jessie from Toy Story for the reception.

Meanwhile, Belle — a makeup artist — made her entrance in front of 180 guests on a stunning black Belgian horse named Zena, while holding a pastel and cream-colored bouquet. Her dress was the "perfect mix of classy, sexy, fierce, feminine, dreamy and daring," she previously told PEOPLE. "Anyone who sees me or knows me can tell I don’t like traditional anything."

According to celebrity wedding planner Sophie Parrott of Marvelous Events USA, the couple, who got engaged two years ago, also on Halloween, wanted "informal" and "fun" for the concession movie theatre style menu, which included hot dogs, pretzels, and pizza nachos. "Super casual and unpretentious."

Parrott added that the bride and groom wanted their "I Do's" to be a "fun and engaging experience" for guests from beginning to end during the "adventure-filled wedding celebration."