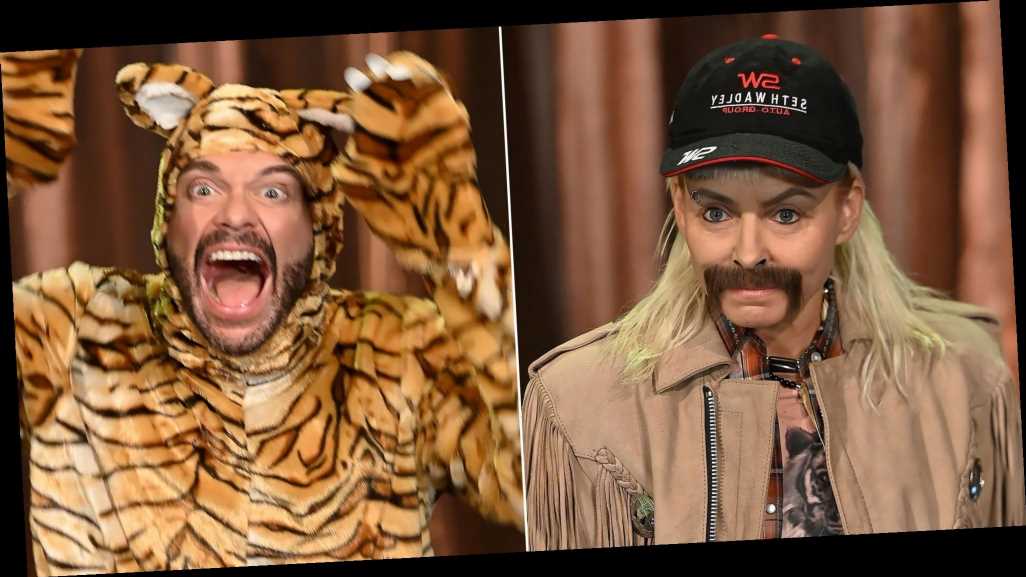 2020 has been scary enough! However, that did not stop Kelly Ripa and Ryan Seacrest from leaning into the madness of the year with their Live With Kelly and Ryan Halloween costumes.

The cohosts showed off get-ups inspired by Schitt’s Creek and Tiger King during Live’s Best Halloween Show Ever: Almost as Scary as Real Life annual extravaganza, airing on Friday, October 30.

Ripa, 50, dressed up as Joe Exotic from the Netflix hit Tiger King, while Seacrest, 45, embodied a tiger. In another set of costumes, the pair portrayed mother-son duo Moira and David Rose from Schitt’s Creek after the sitcom’s wrap in April and Emmys success in September.

The talk show’s annual audience Halloween costume contest will be virtual this year since fans are not in the studio due to the coronavirus pandemic. At-home viewers instead will be given a chance to be a part of the episode’s virtual audience and could win prizes totaling $10,000.

Ripa teased her and Seacrest’s costumes via Instagram on Tuesday, October 27. “And now a warning….. #livehalloween,” she captioned a video of the twosome in outfits inspired by Cheer, Survivor and more. “Is this landing the way you had hoped?” she asked the American Idol host in the clip.

Meanwhile, Seacrest posted a photo of himself in his Schitt’s Creek attire. “EW, DAVID,” he wrote via Instagram on Tuesday. “Don’t miss our new #LIVEHalloween show this Friday! #SchittsCreek.”

Dan Levy, who played David on the show, reacted to pics of the Live With Kelly and Ryan costumes with glee. “Omg,” he tweeted on Tuesday.

Ripa and Seacrest revealed in October 2019 their process for selecting costumes each year. “We’ll look at some of the more zeitgeist pop culture characters, shows or movies,” he explained to Parade as she added: “What’s in our wheelhouse that we can do, and what will people understand? We don’t want to be too inside.”

As for how the tradition exploded into what it is today, the actress credited Seacrest. “When we first started, we would put on a costume and that was pretty much it,” she said. “But Ryan is the most willing cohost we’ve ever had, so it has really grown exponentially with his willingness to pretend to be anybody!”

Scroll down to see more of Ripa and Seacrest’s 2020 Live Halloween costumes!