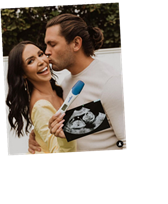 Well, it remains to be seen if Vanderpump Rules will be canceled by Bravo following a summer of scandal.

But one thing is for certain — if the network decides to launch Vanderpump: The Next Generation in about 25 years, they’ll have a ready-made cast of young partiers!

First, we learned that Stassi Schroeder was pregnant.

Then came word that that Lala Kent is expecting.

Now, it looks as though we have yet another SUR-baby on the way!

Yes, Scheana Shay may not have been a part of the Vanderpump pregnancy pact, but after months of trying the 35-year-old former hostess is pregnant with her first child!

Scheana has been dating Brock Davies for several months now, and the couple announced their forthcoming bundle of joy on Instagram today.

“IT’S ALL HAPPENING APRIL 2021!!! We are expecting our rainbow baby!!!” Scheana captioned the above photo on Instagram.

“Thank you @clearblue for giving me the most amazing news of my life!” she added.

(Hey, you can’t fault her for cashing in a little bit on the announcement. Diapers are expensive!)

“We did a thing honey. I’m so happy I have you to balance me out, I love you honey… congratulations to us,” Davies commented on the pic.

Speaking with People magazine, Scheana offered words of encouragement to other women who may have suffered miscarriages or struggled to conceive.

“Don’t give up,” she told the magazine.

“I didn’t know that I would be able to get pregnant on my own, so I’m just so excited that we were able to do this naturally and that everything looks good,” Shay continued.

“I’m so excited to have a healthy baby and hug my baby and just be a mom.”

Scheana went on to recall the anxiety she experienced during the early days of her second pregnancy.

“I was just too afraid to lift up a 5 lb. weight. I was like, ‘But what if that makes me have a miscarriage?’ It was every little thing,” she explained.

“After going through the miscarriage and knowing those signs … it was comforting knowing, ‘OK, you’re not spotting, you’re not cramping, you still feel pregnant, you’re still tired, your boobs still hurt,” she added.

“I had to keep convincing myself it’s OK because last time I woke up one day and there’s no other way to explain it, just that I didn’t feel pregnant anymore.”

Thus far, none of Shay’s castmates have congratulated her publicly, but we suppose that’s not surprising.

Currently, Scheana is involved in a feud with Stassi, who has retained her queen bee status despite being fired from Vanderpump.

The drama never ends with this clique!

We’re sure their offspring will carry on the tradition of being endearingly “extra” in all things!