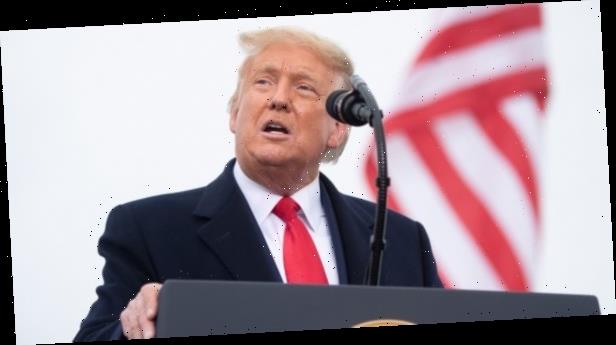 In the waning days of the 2020 campaign, President Trump has intensified his accusations of (mostly unspecified) wrongdoing by his Democratic rival Joe Biden based on emails supposedly found on a laptop formerly owned by Biden’s son Hunter.

But a plurality of voters aren’t buying it — and a majority believe Trump and his family are more “corrupt” than the Bidens, according to a new Yahoo News/YouGov poll.

“They had the laptop, I call it the laptop from hell, and based on that laptop they should have never impeached,” Trump said during a rally Monday in Allentown, Penn., implying without evidence that Democrats, presumably the ones on the House Judiciary Committee, had possession of Hunter’s laptop and covered it up during last year’s impeachment proceedings because it would implicate Biden and exculpate Trump. “But they didn’t want to reveal a little thing like that.”

The existence of the laptop was only disclosed earlier this month by Trump’s lawyer Rudy Giuliani, who claimed it had been abandoned in a computer repair shop last year and that the shop’s owner had given the hard drive, or copies of the contents of it, to Giuliani and the FBI. That narrative doesn’t explain how Congressional Democrats might have known about it during last fall’s impeachment hearings, which were based on Trump’s attempt to persuade Ukrainian government officials to announce an investigation of the Bidens.

Overall, from what they’ve heard of the laptop, 44 percent of registered voters say Joe Biden didn’t do anything wrong, 37 percent think he did and another 19 percent aren’t sure.

A former business partner of Hunter Biden has claimed that he traded on his father’s name and position to solicit business deals in China, and that the senior Biden, during or after his tenure as vice president, was supposed to receive a cut of the profits. Joe Biden has denied receiving or soliciting or expecting any income from his son’s overseas business dealings, and there is no evidence that he did, including on his income-tax returns, which he has made public.

The survey, which was conducted from Oct. 23 to 25, found that views on Hunter Biden’s laptop have hardened along predictably partisan lines and appear unlikely to affect the outcome of the election. For instance, 77 percent of Trump voters say there’s been too little media coverage of the controversy; three-quarters of Biden voters say there’s either been too much (56 percent) or about the right amount (19 percent). As for Biden’s involvement, 82 percent of Trump voters are convinced the former vice president did something wrong — while 79 percent Biden voters are sure he didn’t.

In between, independents are evenly divided (41 percent yes vs. 40 percent no) on the question of whether Joe Biden committed any wrongdoing, and they’re even more likely to believe his son was involved in some sort of misbehavior (46 percent yes vs. 27 percent no). Such numbers suggest that Trump’s message is at least reaching less partisan voters, more than three-quarters of whom say they have heard either a lot (39 percent) or a little (38 percent) about the laptop.

The problem for the president is that by an 11-point margin, independents also say Trump and his family are more “corrupt” (50 percent) than Biden and his family (39 percent) — a view shared by the majority of registered voters (53 percent to 39 percent).

Although Trump denied having business interests in Russia during the campaign, he was in fact pursuing a major real-estate deal in Moscow, according to his lawyer at the time, Michael Cohen, who was personally involved in the negotiations. Trump’s sons manage his hotel and resort business, which charge the U.S. government for rooms rented by officials and security personnel during the president’s frequent visits to his properties. Senate Democrats brought a lawsuit charging that Trump was violating the Constitution by receiving profits from foreign governments who put up diplomats at his hotel in Washington, D.C. The Supreme Court let stand a lower court ruling dismissing the case on technical legal grounds.

Asked directly whether they think Joe Biden and his family are corrupt, 47 percent of registered voters say no. Just 40 percent say yes.

Asked the same question about Trump and his family, 55 percent of registered voters say yes. Just 35 percent say no.

To capitalize on his “laptop from hell” attacks, Trump would need to convince any remaining persuadable and undecided voters to break his way at the last minute, much as they did after he spent the closing weeks of the 2016 campaign harping on Hillary Clinton’s emails. Instead, the Yahoo News/YouGov poll shows, Biden’s lead among likely voters grew from 11 to 12 points over the last week; the number of undecideds, meanwhile, shrank to 3 percent, and just 3 percent of Biden’s voters still say there is “a chance” they will change their minds. Nearly half of registered voters (48 percent) say Trump talks about Hunter Biden’s laptop “too much”; far fewer say he talks about it “too little” (12 percent) or “about the right amount” (28 percent).

So unless some shocking new information emerges before Election Day, the laptop is unlikely to be a winning issue for Trump. In fact, a majority of registered voters (55 percent) say it’s inappropriate for Trump to call for Biden to be “locked up,” and only 28 percent think Biden has “committed crimes for which he should be imprisoned.”

In contrast, a narrow plurality of Americans (43 percent vs. 42 percent) say that if Biden wins on Nov. 3, he should “launch investigations into whether Trump committed crimes” during his presidency.

The Yahoo News survey was conducted by YouGov using a nationally representative sample of 1,500 U.S. registered voters interviewed online from Oct. 23 to 25. This sample was weighted according to gender, age, race and education based on the American Community Survey, conducted by the U.S. Bureau of the Census, as well as 2016 presidential vote, registration status, geographic region and news interest. Respondents were selected from YouGov’s opt-in panel to be representative of all U.S registered voters. The margin of error is approximately 3.0 percent.