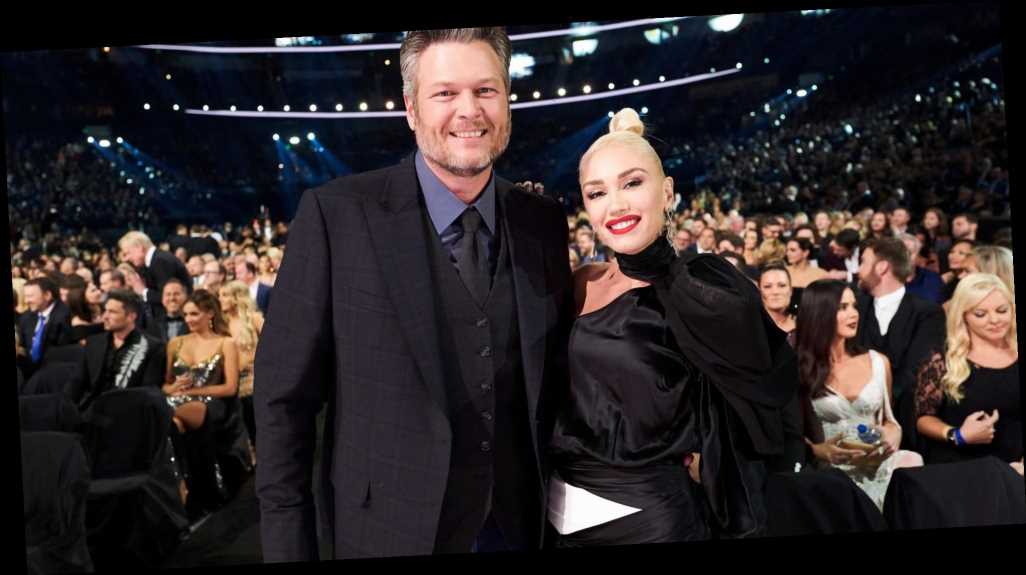 If love songs involved swivel chairs, reality TV competition shows, and amateur singers hoping to make it big, Gwen Stefani and Blake Shelton's romance would be a story of legends. But, since ska-inflected pop and country don't generally cover celebrity love in the modern world, their relationship, which is just about five years strong, has become one of sheer fascination.

Here's how things went down in the time since the two met on the set of The Voice. Christina Aguilera was a coach on The Voice since its very first season. When she left her post, Stefani filled the vacuum with her peroxide blonde coif and signature red lipstick. Stefani meets Shelton for the first time and posts a photo on Instagram. At this point, things are, theoretically, strictly professional.

In the fall viewers are starting to see some sort of spark between the two, who are openly flirting on the show. Things got official in November when E! News reported that the two were seen holding hands at a Maroon 5 Halloween party in Studio City. While there wasn't an official announcement after the photos made the rounds, Shelton's rep confirmed to E! News that the two were dating.

Shelton got Stefani a horse.

"I got her a horse and I got myself a horse at the same time. Gwen, she loves riding and she loves horses," he told Entertainment Tonight. "It's actually so funny that people are so shocked by that, but if you can name me one girl on the planet that doesn't love horses or just thinks that they are beautiful." After the red carpet comes the studio — for this couple, at least. Just in time for summer, the duo released "Go Ahead and Break My Heart," a tune co-written by Shelton and Stefani. It featured on Shelton's album, If I'm Honest. They performed the tune together at Billboard Awards.

“Gwen saved my life," he told Billboard. "Who else on earth could understand going through a high-profile divorce from another musician? You can't even imagine the similarities in our divorces."

"Let's just talk only about Blake, because he's so awesome," Stefani said during an appearance on The Tonight Show. There's not much more to say about that, but she went on to talk about their trips to Disneyland and how much the two enjoy camo print.

During an appearance on Howard Stern's radio show, Adam Levine said that the couple is "so in love it's disgusting."

"It's so funny. They found each other at really interesting times in their lives. It's really beautiful. Because it's in the public eye, a lot of people want to have their own bullshit opinions about it," he said. "But I'm, like, there. I see it every day. I have a pretty unique perspective on it, and it's real, man."

Shelton is named People's Sexiest Man Alive. During an appearance on Ellen, Stefani defends the decision, saying, "He doesn’t even like to do a photoshoot. You can never convince him to do it. So he just called me like, 'They want me to do this.’ And I was like, 'You should totally do it! You're so sexy!'"

It's Stefani's turn to have Blake make an appearance in one of her songs. Just in time for the holidays, the two release "You Make It Feel Like Christmas," just as rumors start to surface about the two of them looking for a surrogate.

Shelton checks out Stefani's Las Vegas residency and, of course, he's a fan.

On opening night, Gwen posted this sweet snapshot of Shelton with her kids.

Stefani says that Shelton's influenced her personal style, saying that she ups the femininity to temper his masculinity.

"It’s probably because I’m super in love and have a really manly man," she told InStyle. "I enjoy letting that part of me come out."

Shelton and Stefani, along with her three sons, Kingston, Zuma, and Apollo, walk the red carpet at the Ugly Dolls premiere, which also features Voice coaches Kelly Clarkson, and Nick Jonas. Shelton did voice work for the animated feature and the two showed that they've blended families without an issue.

Are they or aren't they? Rumors of a secret wedding start to make headlines and Shelton doesn't really help the issue when he releases a song with lyrics hinting at it.

In an interview with Country Living, they said, "a reporter told him that the lyrics to his song — 'I don't wanna look back in 30 years and wonder who you're married to' — weren't helping whispers that they've secretly married." Shelton responded, "I love the rumors. Those rumors are great. Anybody that thinks that I'm married to Gwen already, I love it. My God. Who wouldn't want to be married to Gwen Stefani?"

The music keeps coming. Valentine's Day got a little more romantic with the release of a new duet from Stefani, and Shelton, "Nobody but You."

Stefani and Shelton announce their engagement with a post on Instagram showing off the ring. "@blakeshelton yes please! 💍🙏🏻 gx" Stefani wrote.