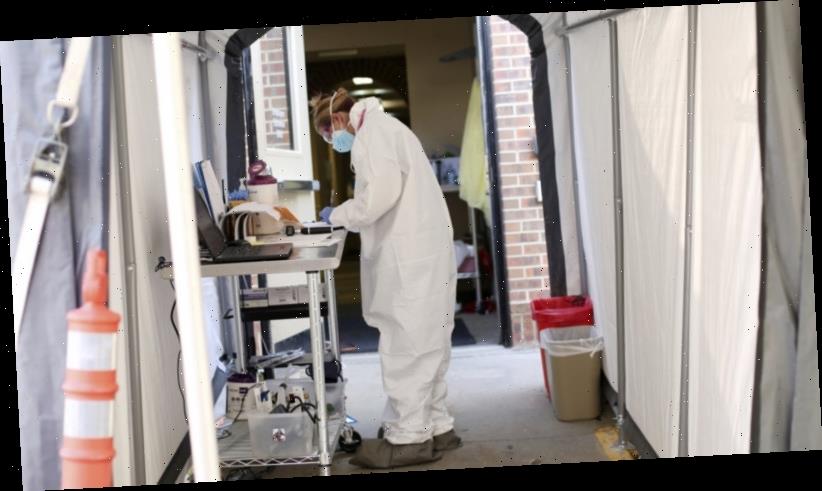 Chicago: The number of daily coronavirus deaths reported in the US has reached its highest in two months, offering more evidence that the pandemic is gaining fresh momentum across the country as cooler weather sets in.

COVID-19 deaths nationwide had averaged about 700 a day for much of October before rising to 1237 on Wednesday, according to a Reuters analysis, the most since August 19. 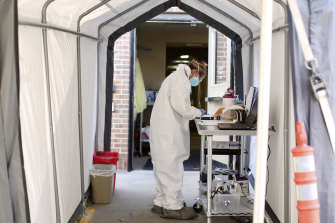 A medical worker at a coronavirus drive-through testing site in Casper, Wyoming, this month.Credit:AP

The number of new infections began trending higher five weeks ago, and health experts have warned that a rise in fatalities would follow.

In Wisconsin, a pivotal battleground state that could help decide the November 3 presidential election, Governor Tony Evers pleaded with residents to "please stay home" after his state, along with five others, reported a record day-over-day increase in COVID-19 deaths.

Since the pandemic reached the US earlier this year, the nation has lost more than 222,000 lives, the world's highest total as well as one of the highest per capita death rates, especially among developed nations.

For a third consecutive day, the country reported more than 60,000 new cases, bringing the total to more than 8.3 million. The rise partly reflects stepped-up testing in many states, although higher hospitalisations and deaths are not linked to more testing.

At a drive-through testing site in a Milwaukee parking lot, residents waited to get tested in a long line of vehicles.

The autumn resurgence and dire predictions that the spread would further accelerate in the cold winter months have once again cast a harsh spotlight on President Donald Trump's handling of the pandemic.

He will debate Democratic challenger Joe Biden for the last time before the election on Thursday night (Friday AEDT). But with less than two weeks before the election, Trump's dismissive approach to the coronavirus has taken a toll on his re-election prospects, with polls showing Americans losing confidence of his ability to handle the pandemic.

A report released on Wednesday by Columbia University estimated that between 130,000 and 210,000 COVID-19 deaths could have been avoided in the US, calling the federal government's response to the pandemic an "enormous failure".

"The weight of this enormous failure ultimately falls to the leadership at the White House – and among a number of state governments – which consistently undercut the efforts of top officials at the CDC and HHS," the report said, referring to the US Centres for Disease Control and Prevention and the Department of Health and Human Services.

The White House was not immediately available to comment. Last month Trump told Fox he would give himself an "A+" on his coronavirus response.

The spike in cases led officials in some states to reinstate restrictions on businesses to help curb further spread of the virus.

In Illinois, one of nine states that reported their highest one-day increases in cases since the start of the pandemic, some residents planned to protest a fresh round of restrictions announced this week by Governor JB Pritzker.

A petition to the Governor posted on change.org by a restaurant owner in St Charles, Illinois urged businesses to stay open on Friday, when Pritzker's restrictions in some counties, including a ban on indoor dining, are set to go into effect.

"This is restaurant's 'stay at work' order so that we can provide work and income for our employees and ourselves," it read.

On top of the health toll, the pandemic has weighed heavily on the finances of many Americans, who say they are barely getting by as Washington wrangles over another round of financial aid.

The number of Americans filing new claims for unemployment benefits fell more than expected last week, but remained very high as the labor market recovery shows signs of strain as the pandemic rages on.

"There are still millions and millions on the nation's unemployment rolls because many of the jobs lost during the steepest downturn in economic history have not yet returned," said Chris Rupkey, chief economist at MUFG in New York.

Our weekly newsletter delivers expert analysis of the race to the White House from our US correspondent Matthew Knott. Sign up for The Sydney Morning Herald‘s newsletter here, The Age‘s here, Brisbane Times‘ here and WAtoday‘s here.