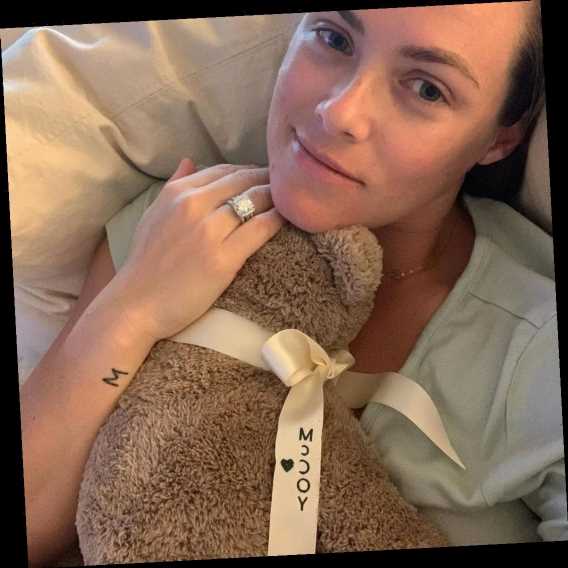 Kara Keough is letting grieving parents know they're not alone.

The former Real Housewives of Orange County star penned an open letter about her own experience with loss in honor of Oct. 15's National Pregnancy and Infant Loss Remembrance Day.

The piece, which was published on Good Morning America's website, came six months after Kara's newborn son, McCoy Casey Bosworth, passed away. McCoy was born on April 6 but experienced complications during childbirth. As Kara noted at the time, the baby had shoulder dystocia and a compressed umbilical cord. GMA reported that after days of testing, Kara and her husband Kyle Bosworth learned the infant was unlikely to gain consciousness. McCoy died on April 12.

In the beginning of her letter, Kara addressed her "fellow loss mom," noting she wished they could both go by another name.

"'Angel Mom' feels too fluffy, and 'Bereaved Mother' sounds like we should be wearing black lace and howling on our knees in a stone church somewhere," she wrote. "Don't get me wrong, we're absolutely still howling. But we're doing it in yoga pants. Lululemons just do a better job of hiding our postpartum bellies and helping us avoid questions like, 'When are you due?' or worse, 'How's the baby?!'"

She then wrote about how she had to repeatedly share the news of her baby boy's death with others and how watching the world move on "feels like a personal attack."

"We should be labeled with a sticker that reads 'FRAGILE: Handle with care,'" Kara added, "because we're one trigger away from racing back to that worst moment."

These moments, she acknowledged, look different for everyone. "For some, that worst moment has a soundtrack: 'There's no heartbeat.' For some, like myself, that moment stretches over the course of six days," she wrote. "For most, it's the moments before the moment—the 'if I had only,' the 'if I could have just,' or the 'why didn't I?' These questions plague all of us, the ones we ask ourselves and others, the desperate plea: How could I have saved my baby? We blame ourselves, not because we did anything to harm our children, but because we're their mothers, and protecting them is our most sacred duty."

Reign Disick Has Taken His Mohawk to the Next Level: See the Pics

As she continued to pen her piece, Jeana Keough's daughter explained how "people say the wrong things and people say right things that feel wrong."

"Some days the right thing is a friend pulling you out of bed and handing you a cup of coffee," Kara later added. "Other days, the right thing is just staying in bed and feeling it all. Texts become so dismissible, phone calls intrusive and FaceTime may as well be a teacher calling on us in class when we didn't do the reading. Those who show up and ask nothing are the best kinds of friends. The friends that can sit quietly with us without feeling the need to fill the silence with the 'I'm sorry's that don't bring our babies back but instead make us feel like we need to respond with, 'It's OK,' when it isn't."

She then reflected on how the "space where our babies should be somehow starts feeling less like a gaping hole and more like an invisible fullness as time goes on."

"We want to hear their names, we want to think about them and smile, we want to see them in the world around us," Kara continued for GMA. "Milestones hit us like bricks and time feels jumbled. How has it already been so long? And who would they be today?"

And while she noted that "every day, every minute, another mother joins us in this club"—a club "no one wants to be a part of"—she also shared that the bond between these members is "unlike any other."

"Most people don't get the pleasure of realizing how treasured they are until their dying day," she continued. "And in a way, we do die a little bit the day we lose a child; the old us is gone. But the new us can be better. The new us can leave pettiness where it belongs. The new us can see beauty where others might pass it by. The new us can love again, despite knowing the risk. That kind of bravery didn't exist in us before. But alas, here we are. Never moving on but moving with."