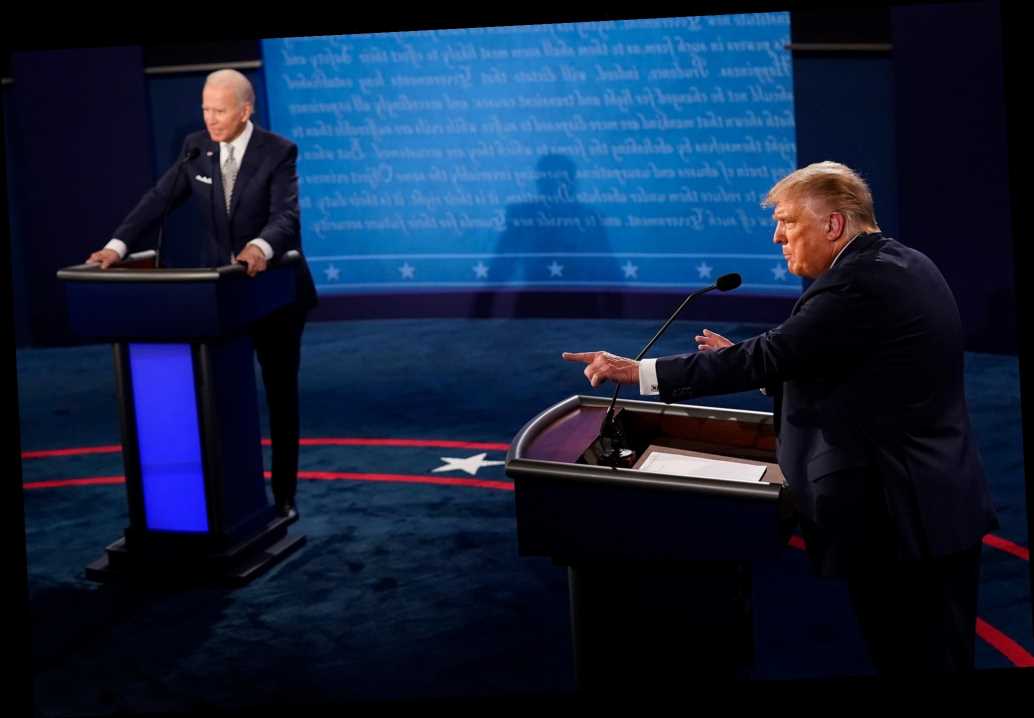 Joe Biden wants to be the Not-Trump, and boy was he ever at the first debate Tuesday night.

The former vice president spent the entire evening under withering assault from President Trump, who dominated the proceedings as he always has in these face-to-face confrontations — by interrupting, insulting, needling, ignoring the rules and feeding vampirically off the shocked finger-wagging of moderator Chris Wallace.

Without question, Biden seemed outmatched from beginning to end. But outmatched by what, exactly?

But the simple fact of the matter is that Trump was incredibly unpleasant to watch, and Biden wasn’t.

It was painful and sordid and cringe-inducing, and that was almost entirely Trump’s doing.

People on both sides are fond of saying that we’ve all gotten used to Trump. His supporters constantly dismiss attacks on his comportment as being the same old same old. Those who loathe him pull their hair out at the fact that the earth has not swallowed him up because he lies without consequence.

But no one in these two camps matters a whit now. They will all drag themselves over glass to vote for or against him.

The problem for Trump is that those people are the ones who will likely decide the election — the ones who don’t love him, who don’t even like him, but might vote for him anyway.

And face it: If you didn’t love Trump when the evening started and weren’t already a fan of his WWE approach to politics, there had to be at least one moment, maybe two, when you listened to the leader of the Free World and thought, “What a jerk.”

There’s a very small number of people who haven’t made up their minds yet, and if the polls are even remotely accurate, Trump has to win a landslide among them to make up the gap with Biden.

Last night was not the way to do it. It may have the way to win the Republican nomination in 2016, because Trump was whaling the tar out of conventional GOP politics and politicians, and it turned out a plurality of Republican voters felt the same way about them.

But given how it came across last night, the Trumpian primary approach may not be the right way to win the presidency in 2020, not with the headwinds Trump faces on coronavirus and the enduring problem of his own trustworthiness and truthfulness.

It isn’t like Biden doesn’t have problems with the truth and wasn’t playing fast and loose with the facts. He blamed Trump for the corona-caused recession, which is ridiculous. He denied the existence of antifa, which has been lighting American cities afire for months.

He simultaneously declared himself “the Democratic party” at one point when Trump pressed him on his party’s hard-left radicalism and then, like Hyman Roth in “Godfather II,” insisted that it wasn’t his place to call Democratic mayors and governors about the summer unrest — because, after all, he is just a retired vice president living on a pension.

But Trump’s need to dominate every exchange meant he never let up and let Biden harm himself.

Trump was so ragingly aggressive, in fact, that Biden’s shockingly harsh slams — calling Trump a clown and a racist, even saying “will you shut up, man” to the president of the United States — hardly even landed, though they will be replayed endlessly and might make him seem tougher on Facebook than he was in actuality.

Even worse for Trump, Biden and his team clearly settled on a strategy to declare that everything — everything — Trump said was untrue and not to go into detail about it.

It might have seemed lame and weak as it was happening in real time, but it reinforced the message Biden thinks will win him the presidency and may have, oddly enough, won him the debate: Haven’t you had enough?