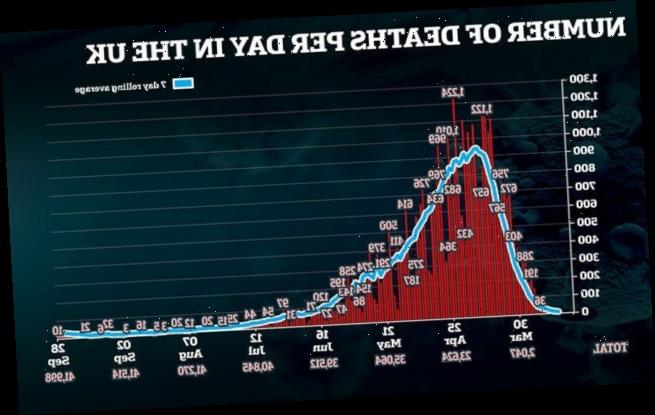 Britain today recorded 10 more coronavirus deaths in the preliminary count, with all of the fatalities occurring in England.

Health officials have yet to confirm the final daily figure, which takes into account data from every setting across the UK. The early count for England only includes laboratory-confirmed victims in NHS-ran hospitals.

Yesterday, the virus claimed 17 more lives, down from 34 on Saturday, although fatalities are normally lower on Sundays and Mondays due to a lag in the way they are recorded in hospitals.

Today’s jump means Britain’s coronavirus death toll stands at 41,998, the worst in Europe, with only the US, Brazil, India and Mexico, all countries with substantially larger populations, recording more victims.

As of Sunday, the seven-day rolling average number of daily deaths was 30, although this is likely to drop when the Department of Health announces today’s true figure later this afternoon.

Daily fatalities reached a 10-week high last Thursday – when 40 deaths were recorded for the first time since July 14 – confirming experts’ fears that the recent spike in infections would eventually turn deadly.

More than 6,000 people are being infected with the disease every day, double the amount at the start of September and triple the amount in August. Until recently, hospitalisations and deaths had remained low and stable, but now admissions are doubling every eight days and fatalities are also trending upwards.

It comes after official data revealed restaurants and pubs were to blame for fewer than three per cent of all recorded outbreaks of respiratory illnesses in the week Boris Johnson announced the 10pm curfew on the hospitality sector.

Just 22 outbreaks of acute respiratory infections were reported in food outlets in England between September 14 and 20. Seventeen of these were confirmed to be down to Covid-19, while the others could have been flu or other viral illnesses.

The Public Health England data provides a snapshot of where viruses are spreading across the country.

In a weekly update on outbreaks in different settings, PHE reports situations where two or more people have been diagnosed with the same chest infection and the cases reported to local councils’ public health teams. Outbreaks can vary considerably in size and data is not published about how many people are involved in each. 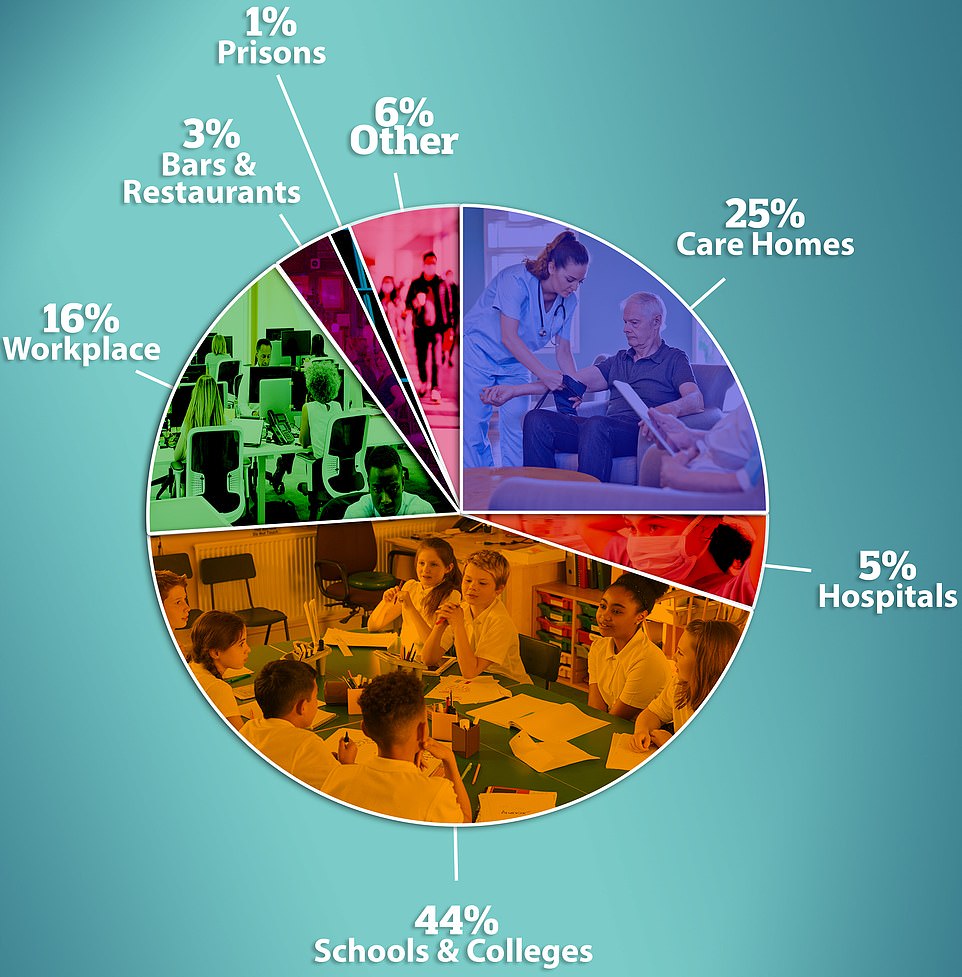 Public Health England showed that the majority of outbreaks of coughs and chest infections – some of which were likely Covid-19 – happened in schools and care homes in the week to September 20. Just three per cent were reported from bars and restaurants

Boris Johnson’s 10pm coronavirus curfew was branded a ‘sick experiment for a second wave’ by his own MPs – as the mayor of one of the UK’s biggest cities warned it was doing ‘more harm than good’.

Mayor of Greater Manchester Andy Burnham said the government’s drinking deadline was pushing crowds into supermarkets to buy booze to drink on the curbs or in homes.

It came as scores of drinkers were spotted in trendy Moseley, Birmingham, on Saturday night twirling around to a brass bands, despite restrictions urging social distancing.

The PM’s curfew – which he announced last week – has been widely panned due to these predicable consequences.

One Tory MP texted Politico: ‘Which clown-faced moron thought it would be a good idea to kick thousands of p***** people out from the pubs into the street and onto the tube at the same time?

‘It’s like some sort of sick experiment to see if you can incubate a second wave.’

Out of all 772 cough outbreaks recorded across the country in the week to September 20, 532 have been directly linked to coronavirus.

The figures come amid mounting concerns that closing pubs and restaurants at 10pm may lead to a spike in infections. Over the weekend drunk travellers were pictured crowding onto public transport at chucking-out time – they would likely have been spread out over longer time periods before the curfew.

Drinkers were also seen partying in the streets in London’s Piccadilly Circus, Leeds, Liverpool and Manchester after they were forced out by venues pulling down the shutters.

The Mayor of Manchester, Andy Burnham, has warned the Government’s draconian restriction is doing ‘more harm than good’ by pushing crowds into supermarkets to buy alcohol to drink on curbs or in their homes.

And landlords have also warned the measures could serve a ‘death sentence’ on businesses that are barely ‘treading water’ after losing months of trade during the UK’s blanket lockdown.

Acute respiratory infection outbreaks – when two or more people have the same coughing bug – became eight times more common in the second week of September than in the first in England’s schools (23 to 193).

Not all the outbreaks will be Covid-19 – they are chest infections more generally – but some are.

The high level of outbreaks in schools may be due to a resurgence in rhinovirus, which causes runny noses, Public Health England data suggests.

Its graph shows a major uptick in cases of this virus as children mix in schools, after spending months at home.

The data will likely pile more pressure on the Government to consider abandoning its 10pm curfew which has been accused of being ‘dangerous’ and ‘creating an incentive for people to gather in the streets’.

Former Labour leadership contender Mr Burnham said: ‘I received reports that the supermarkets were absolutely packed to the rafters, lots of people gathering after 10pm.

‘I think there needs to be an urgent review of the emerging evidence from police forces across the country. My gut feeling is that this curfew is doing more harm than good.

‘It’s potentially contradictory because it creates an incentive for people to gather in the streets or more probably to gather in the home. That is the opposite of what our local restrictions are trying to do.

‘I don’t think this has been properly thought through to be honest and it also of course damages the bars and restaurants.’

His words were echoed by Liverpool mayor Joe Anderson. The city has seen its average number of daily cases almost treble in two weeks, pushing it on to the Government’s lockdown watchlist.

Slamming the Government’s blanket approach, he said: ‘You can’t have off-licences and supermarkets open until midnight selling beer, and pubs emptying at 10pm, when people go to the off-licences, buy beer, drink either out in the street in large groups or go to houses, and drink in large groups. It will just spread the virus.

‘The situation currently is making things more dangerous and not better.

‘I think it’s stupid to close restaurants at 10pm,’ he said, adding that midnight would be ‘more responsible’ and that pub closures should be staggered.

One enraged Conservative MP also voiced his concern over the measures, telling Politico: ‘Which clown-faced moron thought it would be a good idea to kick thousands of p***** people out from the pubs into the street and onto the tube at the same time?

‘It’s like some sort of sick experiment to see if you can incubate a second wave.’

Pictures showed thousands of revellers crowding onto England’s streets and public transport this weekend after the curfew kicked in at 10pm.

Data from NHS Test and Trace reveals that between September 21 to 27 the most common place of transmission was reported as in the household, or being a visitor to another household.

The data also showed that coronavirus sufferers were most likely to report eating out or shopping prior to developing symptoms, followed by a holiday or living alone or with family.

Scientists are divided over the 10pm deadline which ‘doesn’t seem to be based on evidence’, instead suggesting that it was arrived at using a trade-off between economic damage and a desire to curb the viral spread.