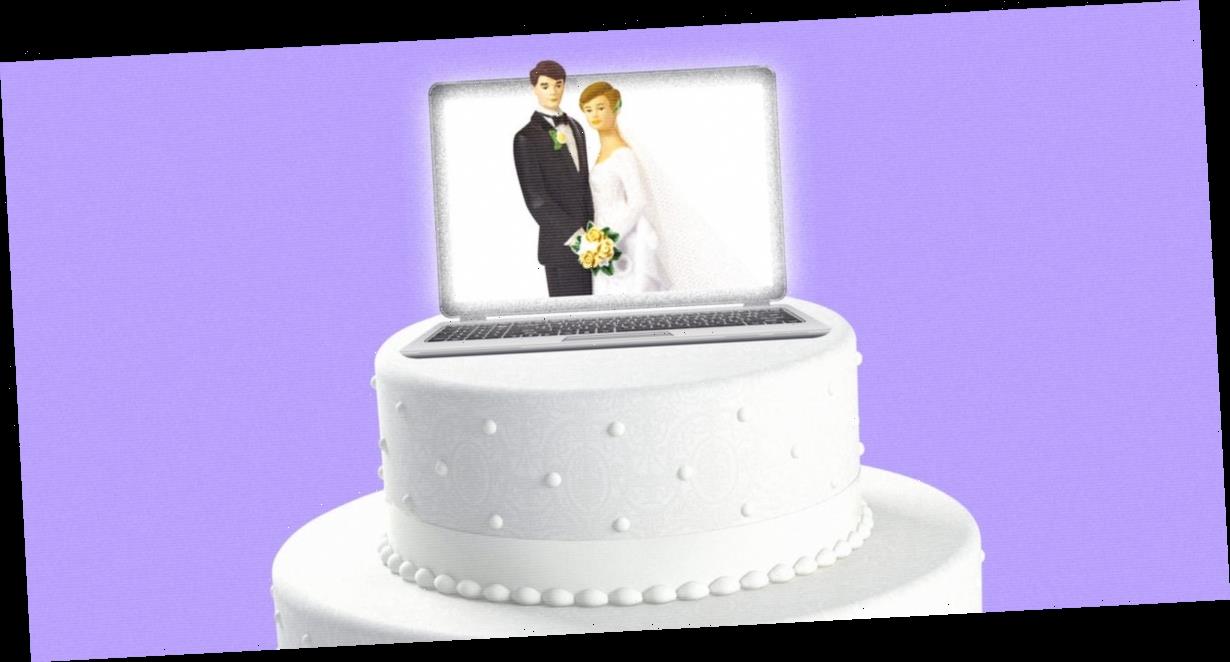 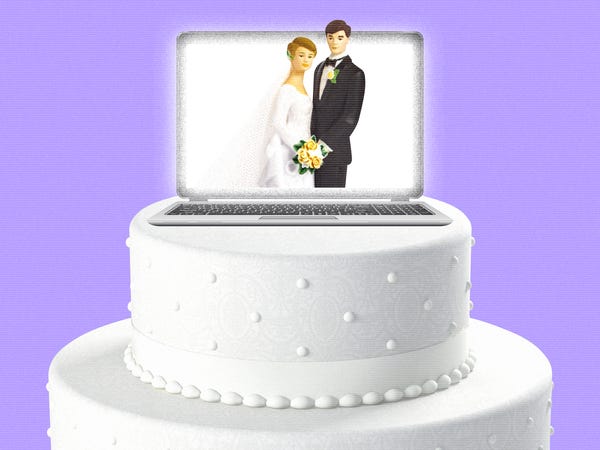 Rivka Holzer spent years running weddings with hundreds of guests as an events manager at a New York City catering company. That changed when the pandemic hit.

"We worked as far as we could into mid-April, and then our boss had a Zoom call with us and told us that we were furloughed," she said. "There were no hard feelings there, of course, because there were no weddings."

Seeing the rising popularity of livestreamed events, she began reaching out to videographers on Facebook to explore starting a virtual wedding-planning business instead.

"Pretty much everyone in the events industry either had to pivot or shut down," she said. "It was just starting to happen that people were livestreaming their weddings. It was not what it is right now back in March and April. It was really just on the cusp. And I thought, 'This is really going to be the new thing.'"

The wedding industry has adopted a digital model, and demand from couples is growing

Like many industries, the wedding industry has been forced to reshape and adapt during the pandemic. Members of the industry have relied more on technology to work remotely, leading to the launch of new services providing virtual experiences.

In a survey of 12,000 couples with weddings booked through October 2020, over one third (37%) are now considering virtual weddings, according to Zola, a wedding planning and registry company.

"That told us that virtual weddings are something that our couples want," Emily Forrest Skurnik, Zola's director of communications, told Insider. The company launched a Virtual Events feature in July — in its first week, over 1,500 virtual events were created.

Alicia Mae, CEO of ILE Events, said she's seen an even higher percentage of virtual weddings in her business.

Even when large gatherings are possible again, wedding planners foresee livestreaming will stay

"I think virtual will become a piece of every wedding in the future, even long past this pandemic," said Samie Roberts, co-founder of LoveStream, a wedding streaming service. "You always have a grandparent who isn't able to make it, or a pregnant friend, or any of those things. I think that now that there's a way to have a virtual piece of a wedding, it will become more of the norm."

Roberts and her husband and fellow co-founder, Ryan Roberts, know the situation all too well: Hurricane Irene kept a third of their guests from attending their wedding in 2011.

"We'd lost a third of my guests — my grandparents, aunts and uncles, things like that," Ryan Roberts said. "So when this [pandemic] hit, we knew, OK, people are still going to want to celebrate with their guests, even if they can't be there. So how do we think about it differently?"

The couple created Bustld, a digital wedding planning tool that uses an algorithm to match couples with vendors, and they launched LoveStream specifically for virtual weddings. The company offers three tiers of services, ranging from $350 to $1,350. Samie Roberts estimates they've run about 40 weddings since April, with more booked into next year.

"I think a lot of people, for the fall, were kind of expecting things to change, and not a lot of things have," she said. "So we're starting to see people adding that virtual portion on now for the fall, and even into 2021. We've talked to people for as far as October 2021."

Skurnik of Zola said wedding planners are making streaming options part of their recommendations now, and she doesn't think that's going to change.

"I do think that coronavirus is going to change the way that people get married for a while," she said. "As opposed to the 2019 trend that we saw, which was phone-free weddings, I think that we're definitely going to see phones at weddings in the future, and we're definitely going to see things like virtual weddings in the future. It's a 180 to that entire trend."

In response, businesses are developing new technology to make it easy — and fun — for couples to plan and celebrate their wedding day

LoveStream, for example, offers a customized website that can include a live chat, virtual guestbook, Spotify playlist, or specialty cocktail recipe. It also has a production team to control video feeds, switching between camera angles or featuring a remote guest's reading for a ceremony.

Another company, Wedfuly, makes events interactive: Coordinators cut between virtual and in-person guests giving speeches. They host group dances, spotlighting guests grooving in their living rooms the way a jumbotron highlights members of the crowd at a basketball game. They place guests into Zoom breakout rooms that function as reception tables.

"A lot of people came to us when the pandemic first hit and said, 'We're just going to do our ceremony,'" Wedfuly's  founder and CEO, Caroline Creidenberg, told Insider. "And we would be like, 'No, but you can do all this other stuff and make it so fun.'"

Creidenberg, a software engineer, launched Wedfuly, a wedding-planning service, in 2017, but pivoted the business to host virtual weddings in April. She ran 300 events in the first month and has 300 more planned. Since April, Wedfuly's staff has swelled from two people to 16.

"We always tell our couples that just like any wedding, this is your day," Creidenberg said. "Add your personality, add your stories and games. Whatever you think accurately represents you as a couple, let's try to bring it into the virtual world."

As the events change, so does the role of the wedding planner

Alicia Mae, the CEO of ILE Events, has already added virtual wedding coordination to her roster to help oversee the more technical aspects of running a livestreamed event.

"How are you supposed to be getting married, making sure the stream is online, and making sure everybody's set up?" she said. "And then you have, you know, your aunt calling, [saying] 'I can't log in!' … It's those little things that can frustrate a couple in that moment, if they don't have somebody who they can offhand that to."

As for Rivka Holzer, after she was furloughed, she teamed up with a videographer to start a high-end virtual wedding planning company, Stream My Dream, which Holzer describes as offering a virtual "red carpet experience" reminiscent of an E! broadcast from the Oscars.

Stream My Dream ran its first wedding in June and has booked more weddings into the fall. They're still scaling up, but like many in the field, Holzer predicts that virtual wedding services will soon become as mainstream as hiring a photographer.

Some industry professionals think the pandemic brought a much-needed 'shakeup'

Despite the upheaval over the past six months, the changes are not necessarily a bad thing, according to Creidenberg.

"I think it's the shakeup that the industry needed to realize that the royal wedding is not attainable for everyone, nor is it the dream of everyone," she said.

"Technology has democratized so many other aspects of our world," she continued. "Zoom is free, so you could literally have a wedding for free. It's so cool that it's totally shaking up this weird industry that was tied to money and social status."

Virtual weddings are a relatively new phenomenon, but they've changed the way people plan and attend weddings for good. Wedding streaming companies continue to add new features and tweak their offerings, each with their own distinct philosophy about what a virtual wedding looks like.

Is it an interactive Zoom dance party or a one-sided stream? What platform is best suited for technologically challenged guests and a seamless viewing experience? How can the scattered attendees of virtual weddings feel connected to the couple and each other? One thing is certain: As the wedding industry moves online, there will be more ways to say "I do" than ever.