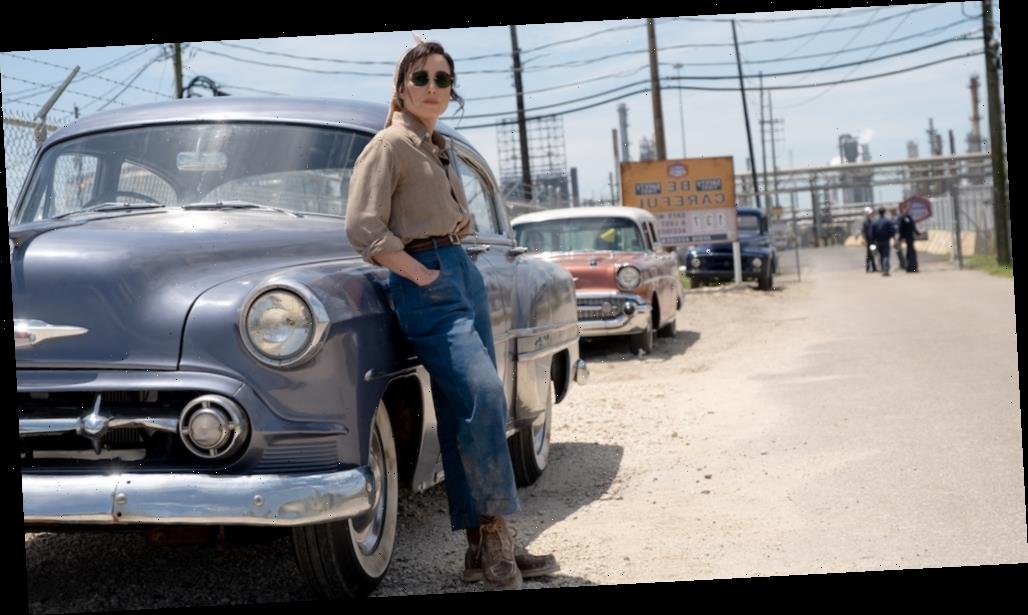 It’s been a rueful joke for three-quarters of a century now that after World War 2, there were miraculously no Nazis (or even ex-Nazis) left in Germany. To start unblemished postwar lives, an entire generation invented cover stories to minimize or deny the political affiliations most of them had before Axis defeat. Some went further than others, adopting whole new identities in new lands to bury wartime deeds. The fictitious exhumation that is “The Secrets We Keep” has Noomi Rapace as a European refugee appalled to realize her former uniformed persecutor now lives in the same American small town as she does.

This “Death and the Maiden”-like suspense drama is neither fully convincing nor particularly original, its narrative running a course that feels somewhat predictable from the outset. But it’s still strong enough to be effective, particularly as a vehicle for the actors. mong other things, it provides a meaty reunion for Rapace and Joel Kinnaman, Swedish high school classmates who previously appeared together in 2015’s “Child 44.” Israeli director Yuval Adler, who co-scripted with Ryan Covington, lends sufficient fluidity to keep what’s essentially a three-character chamber piece from growing stagey, while evading the bombast that might have rendered this morality tale too heavy-handed.

Getting released by Bleecker Street to limited theaters Sept. 16 (with VOD to follows Oct. 16), “Secrets” is unlikely to stir the kind of enthusiasm that gets remembered when year-end awards are doled out, but it should provide most viewers with a reasonably satisfying watch that’s well-suited to home screens.

A native Romanian who met physician husband Lewis (Chris Messina) while working in a Greek hospital just after the war, Maja (Rooney) has lived in a leafy all-American hamlet for years now. (A theater marquee advertising “North by Northwest” suggests it’s 1959 or 1960.) She’s in a park with only child Patrick (Jackson Vincent) when a man whistling at his dog jars her attention. She’s unable to get a good look until a second chance encounter allows her to follow him home. Spying through a window, she decides it’s unmistakable: This is indeed the onetime SS officer she blames for a younger sister’s death, when they were among a group of Roma women set upon by Nazi soldiers after escaping a concentration camp at war’s end.

None of this past trauma is known to her spouse, though evidently she’s required some psychiatric care in the past. But Maja soon has to explain all — because Karl (Kinnaman) is now in her car trunk, having been knocked out and abducted on his way home from factory work.

That alarmed Lewis doesn’t immediately put the kabosh on this whole situation requires a certain suspension of disbelief. Regardless, the couple drag their bound captive to the basement. Once un-gagged, he insists he’s not Karl but Thomas, not ex-Nazi German but neutral Swiss, and was never “in the war,” having spent its duration as a Zurich clerk. Needless to say, Maja doesn’t buy it — and is willing to do anything to get the “truth” out of him.

It’s a claustrophobic setup diversified by an escape attempt, suspicious neighbors, a police visit and the acquaintance made of Thomas’ American wife Rachel (Amy Seimetz). She backs up his story, to a point. But then, it’s possible she, too, wonders just who her husband was before they met. Seimetz brings a depth of worrying doubt that fills out a briefly etched character, while Messina is also very good in the more substantial spousal role.

Rapace gives one of her stronger English-language turns as a sometimes borderline-hysterical heroine who nonetheless refuses to continue being a victim. Kinnaman may impress some as being insufficiently menacing, but it’s a good tactic to keep us thinking Karl aka Thomas just might be innocent as long as possible, despite one’s expectation that the story is unlikely to clear his name. In a script that admirably avoids speechifying, the best writing in fact arrives just when this captive reveals his truth. That revelation underlines how evil can bewilder even its doer, before and after — the “during” being irreconcilable with the person they otherwise believe themselves to be.

Weaving in brief flashbacks to the original events, “Secrets” is more notable for keeping a lid on the melodramatic potential of a somewhat implausible plot (particularly as Maja and Lewis poorly conceal their guilt as a missing-man search commences) than for any explosive dramatic impact. If it’s hardly the most searing depiction of Nazi war crimes, it also merits respect for not turning into a pulpy thriller, as one sometimes fears it will. The resulting middle ground inhabited is sufficiently tense and thought-provoking, however formulaic its individually-scaled ethical conundrums feel compared to those in Adler’s vivid first feature “Bethlehem.”

The Louisiana-shot film’s setting is left unspecified, but period flavor is successfully conveyed amidst smooth, unshowy design and tech contributions all around.