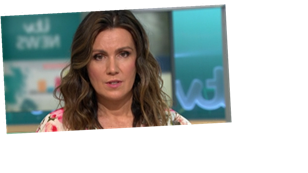 Good Morning Britain was back on our screens on Wednesday for the latest edition of the ITV breakfast show.

Piers Morgan and Susanna Reid were on presenting duty as they discussed the latest coronavirus news.

A concerned Susanna, 49, cut Piers off during one segment today, and asked him if he felt under the weather.

Piers, 55 was forced to defend himself after spluttering during the headlines this morning.

Susanna asked her co-star: "Can I just check for a moment? Because viewers will want a health check. They have seen you were coughing during the headlines.

The broadcaster then took a sip of her hot drink as she looked at Piers.

He snapped back: "Yes, well, you can actually cough without it being serious. It is not the end of the world."

"Are you OK?" asked Susanna, adding: "Because if you need a Covid test, you would probably be sent all over the country for it."

The pair then admitted the show was set to address the testing chaos in its next segment, as Piers admitted: "I just had a frog in my throat."

Ben Shephard deputised for him on Good Morning Britain, alongside Susanna while he awaited his test results.

In a tweet, Morgan said he would be back on the show "as soon as my doctor advises I'm OK to return to work".

He said at the time that he was advised to take a test after developing possible symptoms and was eligible as an essential worker.

Piers was top form this morning as he reignited his feud with the Kardashian-Jenner family following the news that Keeping Up With The Kardashians has been scrapped after 14 years.

Piers raged: "A bunch of very, very average looking dumbo bimbos have taken us all to the cleaners and made billions out of prancing around and doing this.

"They have taken us to the cleaners. Not a brain cell between them."

When Susanna commented the Kardashian clan looked very different now than when the E! Show started back in 2017, Piers chipped in: "Could it be a plastic surgeon by any chance?"

Piers claimed the decision to no longer film KUWTK was made due to poor viewing figures and not for the reason the family give, with just 812,000 tuning into the new series.

Good Morning Britain airs weekdays on ITV at 6am