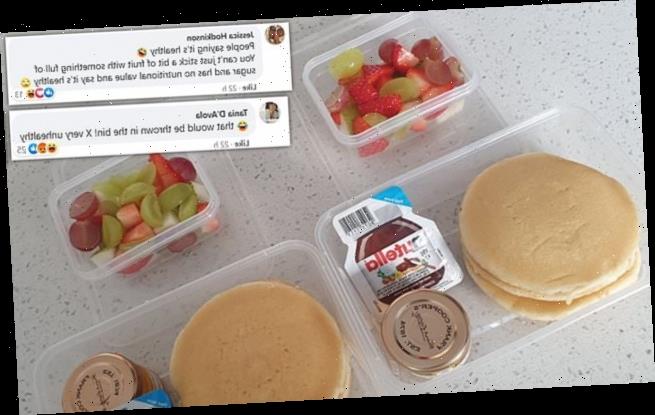 Mother divides opinion with ‘unhealthy’ packed lunch of pancakes, Nutella, honey and chopped fruit – but do YOU think it’s ‘too sugary’ for school?

A mother’s packed lunches for her children have been criticised online for containing too much sugar after she revealed they often contain pancakes, fruit, Nutella and honey.

Christa Spafford, from Lancashire, shared a picture of the low-cost meals on the Extreme Couponing and Bargains UK Facebook page, where she was met with severe criticism from outraged parents.

The lunch consisted of a small box of mixed fruits paired with pancakes, a Nutella spread and a pot of honey each.

Many parents said the lunch was unhealthy and would be ‘thrown in the bin’, while others pointed out that some schools might not allow the Nutella in case any pupils had nut allergies. 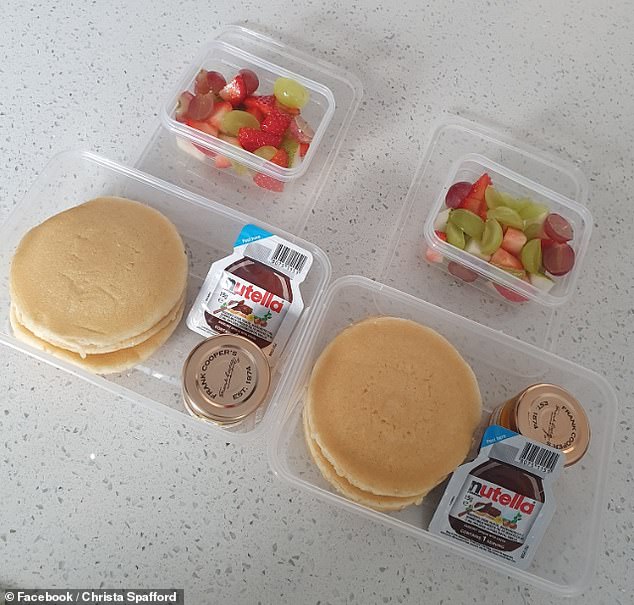 Christa Spafford from Lancashire, was slammed online for sharing a picture of her kids’ packed lunches (pictured) because it was too high in sugar

Parents said the lunches were unhealthy and would be ‘thrown in the bin.’ Others added that adding fruit did not make the lunch healthier (above)

All the items were neatly prepped in a lunch box paired with some mixed fruits in another container.

However, the meals did not sit well with some parents, who said they were more ‘desserts’ than ‘lunches’ and contained too much sugar. 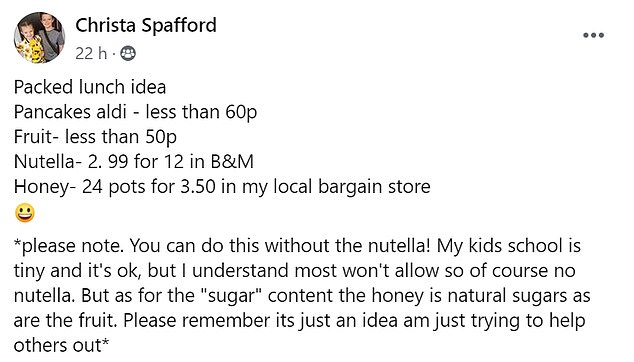 ‘That would be thrown in the bin! X very unhealthy,’ one said. ‘Bit of a sweet tooth going on there,’ one observed.

‘People saying it’s healthy You can’t just stick a bit of fruit with something full of sugar and has no nutritional value and say it’s healthy,’ another added, while a fourth wrote: ‘Our school wouldn’t allow the Nutella or honey.’

Other parents said the Nutella would not be allowed in some schools due to nut allergies.

‘Sadly they can’t take Nutella into school as it’s got hazelnuts,’ one parent said. ‘If I sent that to my child’s school they wouldn’t allow it,’ another wrote.

‘So apparently people are haters and “karens” by stating about the nuts. Do you all realise that a nut allergy sufferer could literally die within minutes of being in contact with nuts?. Great idea for out of school though,’ one said.

In an update to her post, Christa later addressed the criticism she had been facing:  ‘Please note. You can do this without the Nutella! My kids school is tiny and it’s ok, but I understand most won’t allow so of course no Nutella.

‘But as for the “sugar” content the honey is natural sugars as are the fruit. Please remember it’s just an idea am just trying to help others out,’ she added.

People came to the defense of Christa, saying they’d love to have the snack themselves and said the critical parents needed to ‘get a grip’

Some people also defended the mother’s idea, saying others should stop trying to police her lunches.

‘As a grown adult I may do these for myself tbh thanks,’ said one.  ‘Omg all the haters in here,’ said another.

‘I think it’s a wonderful idea my kids would love it as a once a week treat,’ one wrote.  ‘Fab idea for a change for a school dinner. Fruit is healthy. TO THE FOOD POLICE – GET A GRIP PEOPLE,’ said another.