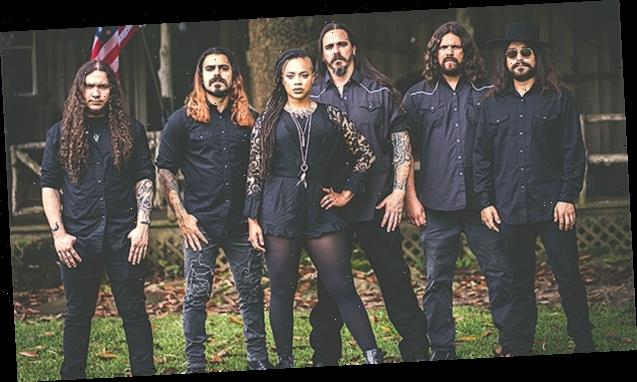 Ocean Of Slumber’s new self-titled album is out, and singer Cammie Gilbert tells HL how she put her experiences as a ‘Black woman from the South’ into these metal tracks.

Though metal comes in many forms and genres – thrash, stoner, technical death, industrial, just to name a few – it often comes in only one color. Bands like Oceans Of Slumber are changing that perception. Fronted by Cammie Gilbert, a Black woman hailing from Houston, Texas, Oceans Of Slumber have released a new self-titled album via Century Media Records today (Sept. 4). It’s the first album since the band underwent a lineup change, and comes at a time when music – and the world, in general — is in upheaval. The protests following the deaths of George Floyd, Breonna Taylor, and other Black people have forced many to confront the racism within their music scenes. Cammie has spoken about her own experiences with racism, both in and out of the Metal community, and she tells HollywoodLife how she’s put her unique point-of-view in this new music.

“When we approached writing this album, Dobber [Beverly, Oceans Of Slumber’s drummer/founding member and Cammie’s partner] was like, ‘let’s talk about you. Let’s get out of our head, and let’s get into how you feel on a grander scale of a Black woman here in the south and translating that into our music,’” says Cammie when speaking EXCLUSIVELY with HollywoodLife. “That’s not a perspective that’s very prevalent in the metal community. So, when we went about writing these songs, it was a green light to really dive into the anger and the displacement, confusion, and conflict that feel about areas of my life – whether they’re self-imposed or societal-imposed. We really dove into exploring things that have obviously always been there and always been troubling, but, for so long, were kind of swept under the rug. We want to shed light on these issues that are forming these craters underneath everyone.”

In addition to addressing these issues on Oceans Of Slumber, Cammie says that this album represents a new direction for the band, thanks to the addition of Semir Ozerkan on bass, and both Alexander Lucian and Jessie Santos on guitars. The trio joined a year after the band’s last album, The Banished Heart, and Cammie says they brought “brought so much energy and a new focus into what we were doing, what we were going to put out.”

“We wanted to showcase our influences,” added Cammie, “and really dig into the atmosphere and dynamics that we love so much from previous albums. And then with the new perspectives and the new take on interpreting these different [musical elements], many different ideas that we had going into the songs. We put them together in the new self-titled album. We feel so confident that it’s a big step forward.”

“Everything that we do is meant to [create] an atmosphere. We wanted to create a world within our album.” An Oceans Of Slumber album, says Cammie, should give you an experience that “takes over the room. There’s an emotional picture that comes to mind with everything that we create.” When asked if there’s a particular moment on Oceans Of Slumber that gives her that emotional moment, Cammie points to the song, “To The Sea (A Tolling of the Bells)”

“There’s a moment where the chorus comes back in, and I feel like the whole song, the whole room, the whole recording booth just, like, burst open. There was space, stars, and infinity, and all the world and longing go into the grief that transcends time. It feels like it’s such a big moment on the album in that song. It’s a chest-opener, a heart-opener.”

“I think every album, there’s one song that can do that for me, and I think, in turn, will do that for listeners. There are so much love and so much warmth and emotion at that moment.  When you’re in it, and you’re listening closely, it’s inescapable. It could shatter everything.”

Being both a woman and Black – two traits not immediately associated with the genre – Cammie said she felt slightly insecure about herself when she joined Oceans Of Slumber in 2015. “When I first kind of got into the band and first coming into metal, there was a lot of self-consciousness about being a black woman in metal and not necessarily coming from a metal background,” says Cammie. Though music was prevalent throughout her upbringing, she grew up in a Baptist home, where there were more R&B and hip-hop, and less Iron Maiden and djent. However, Cammie found that her background was more harmonious with metal than one would think.

“Metal didn’t teach me to sing, but the tones and vibes and essences that go into gospel, and blues, and jazz – which is like, the very reason there’s prog [rock] – they’re there and they’re the same. I love metal. I love the aesthetics and the atmosphere that metal is, but the emotion and the attention to detail – I think the things, they marry each other just fine.”