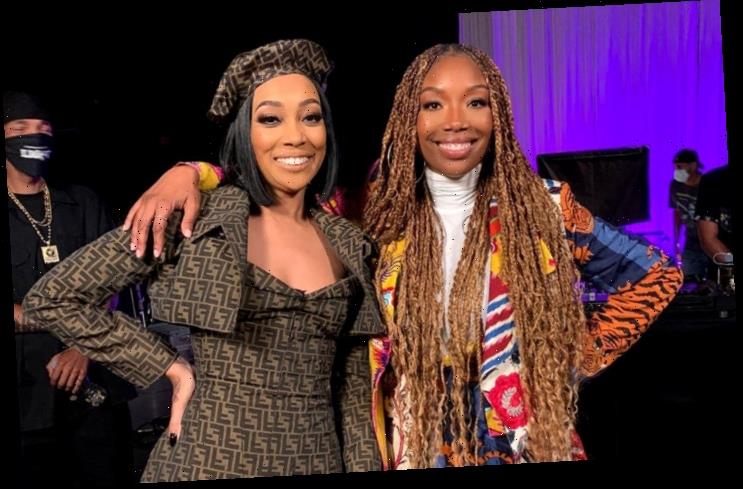 The two RnB powerhouses’ epic ‘Verzuz’ battle comes 22 years after they release their hit ‘The Boy is Mine’ that earned them a 1998 Grammy Award for Best RnB performance by a Duo or Group with Vocals.

AceShowbiz –Monica and Brandy have squashed their decades-long feud as they had fun in the latest episode of “Verzuz” which took place on Monday, August 31. The two musicians appeared to be comfortable around each other as Monica cheekily joked about their old beef in the Live streaming session.

“We had a disagreement and I had to kick in doors,” the “Why I Love You So Much” singer joked. The comments caught people’s attention, prompting them to wonder if she did “kick in” Brandy’s door when they were still feuding years ago. The latter, however, confirmed that she was just joking.

The record-breaking episode, which garnered one million viewers, saw the two R&B powerhouses belting out and dancing to each other’s hits including “I Wanna Be Down” and “Don’t Take It Personal (Just One Of Dem Days)”. Not only fans, fellow celebrities such as Michelle Obama, Timbaland, Missy Elliott and Democratic vice president nominee Kamala Harris also tuned in for the episode.

In an interview with Entertainment Tonight, Monica addressed putting their feud to rest with the song battle. “We’ve long removed ourselves from the dramatics of it but we’re gonna have a very in-depth conversation that may possibly be shared even with the audience because there’s a lot that happens, the fans have no idea what really took place, what really caused the initial friction,” she revealed.

“Hopefully, we can help some of the younger artists avoid doing the same thing because we did a whole lot more together than we did apart,” Monica added.

Their epic “Verzuz” battle comes 22 years after they released their hit “The Boy is Mine” in 1988. The song spent 13 weeks at the top of the Billboard Hot 100 chart and its music video, which featured both ladies singing fiercely at each other, also became a life-changing success. It earned them a 1998 Grammy Award for Best R&B performance by a Duo or Group with Vocals.