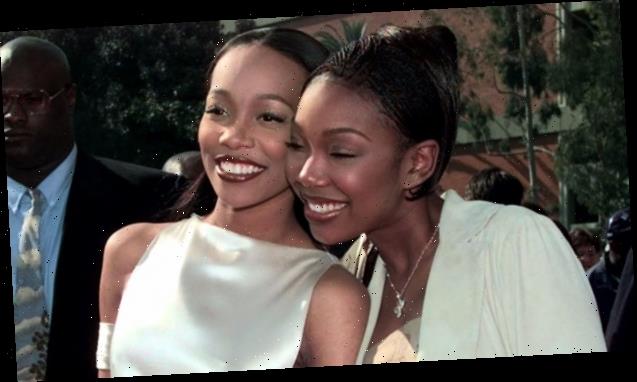 Singers Brandy and Monica are set to go head-to-head on Apple TV’s ‘Verzuz’ this week. Take a look back at the history of their years-long feud.

It may have been over two decades since singers Brandy, 41, and Monica, 39, took home a Grammy Award for their 1998 collaboration, “The Boy Is Mine”. Nevertheless, rumors of a feud between the pair seem to have stood the test of time. The singers are reuniting on Apple TV’s Verzuz, which will be broadcast live on the show’s Instagram account and Apple Music app on August 31. In celebration of the duo going head-to-head for the first time in years, we’re looking back at history of their reported years-long feud.

We can’t wait to celebrate with Monica and Brandy on #VERZUZ! What songs are you excited to hear from them!? Watch on our IG or Apple Music, Monday, August 31st, 8PM ET. Drinks by CIROC. (Video footage from BET)

Their infamous duet “The Boy Is Mine,” was released when the pair were just teenagers. Although there was speculation that the duo were feuding back in the 90s, they never paid any mind to the rumors. When they teamed up again for their duet, “It All Belongs To Me,” in 2012, they opened up about those rumors on Angie Martinez‘s Hot 97 radio show. Monica said that things came to blows “many years ago,” when the pair had a physical altercation. Rumors have long persisted that there was an alleged fist fight during rehearsals for Brandy and Monica’s performance at the 1998 MTV Video Music Awards. During the 2012 radio interview, Monica noted that nobody was hurt and that she was sorry.

Just when it seemed like the past was behind them, drama was reignited in 2016 when Monica encouraged her fans to post their own renditions of her 2003 hit, “So Gone.” When someone asked Brandy whether she would take part in the challenge, she responded, “Chile bye.” Monica was all class when she appeared on The Real, and addressed the shady comment. “I’m not bothered at all,” she said.

The singer added, “Honestly, the old me and the new me are two different things and this journey of self-progression and self-love and empowerment that I’m on, I can’t go backwards. I think that that was just a test from God for me and I’ve always thought that she was one of the most legendary people and has one of the most amazing voices in her runs and riffs.”

The same day, Brandy posted an Instagram photo with a shady caption that read, “Hey Hey Hey, #IKnowTHEREALStoryThatEverybodyDoesntKnow #NewKeyOnKeyNewMeOnMe #MissSubstance #PositivityIsTheOneThingYouShouldNotFake.” She also dropped a series of Instagram videos in which she appeared to mock her former collaborater. “I have to stay so positive, I can’t say what I really feel, because I have to be so…positive!” she said in a mocking tone, adding, “I just know that my calling is higher. I will not take credit for that. That’s all God, period. So I have to stay poised. I have to choose my battles. So I’m going to choose to inspire…just be the change you wish to see in the world. Don’t be shady.”

This decades-long beef was reunited yet again when Monica took to Instagram to celebrate the late Whitney Houston on her birthday. Her simple message read, “you will forever the be the greatest…you will forever be missed.” Hours later, Brandy posted her own tribute to the “I Will Always Love You” singer, captioning the collage, “My angel, my friend, my fairy God Mother. I love you forever…thank you for trusting me with the torch!!!” Monica’s fans flooded Brandy’s Instagram comments section, drawing comparison to their post and criticizing her seemingly self-indulgent caption.

“Monica needs to really check her evil ass fans,” Brandy reportedly told E! Online. “It’s so much stuff I can post about the hateful things they say to me… but I will never have time for that. Always thinking something is about her. It’s not!!!!… Me and Whitney have nothing to do with anyone but the two of us…we made history and I cared more about being with her than I did about anything else.”

Later in the year, Brandy threw even more shade at Monica during her performance at Essence Festival. She changed the lyrics of their iconic duet from “the boy is mine” to “the song is mine.” Yikes! Most recently, she opened up about the feud in a July 24 interview with Zane Lowe on Apple Music. “That song [The Boy Is Mine] was about a boy and it was about us competing over a boy. And so naturally people are going to put us against each other even more because of the topic of the song and what we’re speaking about. So we played into the competitiveness of it,” she explained. Have the women truly put the feud behind them? Fans will have to tune in to Verzuz at 8pm EST on August 31 to find out!