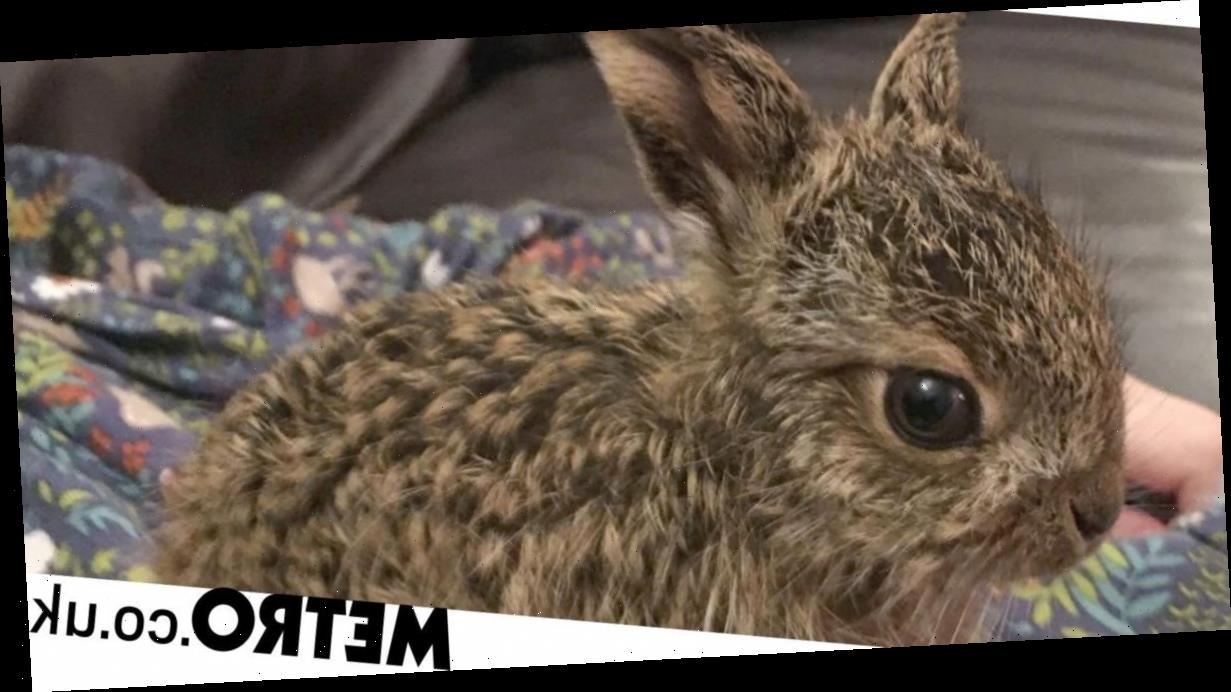 While mowing the lawn, Mark Terry came across a leveret – a tiny baby hare.

The day before, he’d found a dead adult one and he realised the baby had probably been orphaned.

Not wanting to let the baby die too, Mark and his wife Natasha took her in, named her Clover and decided to raise her.

They cared for her for eight weeks before releasing her into fields near their property in Lincolnshire.

But two months on, the hare still regularly comes into the Terrys’ garden, and has even ventured back into the house.

‘We feel a bit like Snow White really,’ Natasha said.

‘She came through the back door into the house, which we were surprised about, and she went upstairs and looked into the mirror on our wardrobe – it was like she’d turned up to check how much she’d grown.

‘She’s been in a couple of times now – the back door’s open and I think she just thought she’d come and see where she used to live.’

They found her during lockdown and spent eight weeks watching her grow before releasing her.

Natasha said: ‘We brought her in and tried a couple of rescues, but it was right at the beginning of lockdown so no-one could travel to us, we couldn’t travel to them, and there was nowhere local that would be able to take her.’

Instead they sought out information on the internet, hastily bought supplies, and set about rearing the youngster themselves.

They started by feeding her powdered rabbit milk from kitten bottles, before progressing her on to grass, hay and some hard vegetables.

The couple were helped by their three children – Daisy, 14, Blake, 12, and Eliza, nine.

‘My youngest, Eliza, she’d really like to be a vet so she’s very into animals and care of animals and wildlife,’ Natasha said.

‘She was particularly interested in keeping charts of her weight and how much she was drinking and that sort of thing.

‘Then our middle son Blake, who has autism, also really likes animals, so he was really interested in seeing how she was getting on and being involved in her care.

‘They even helped cleaning out and the not so fun jobs.’

Eliza decided to name her Clover because a few days after they brought her in, she found a four-leaf clover in the garden.

The family have previously had pets including guinea pigs, a snail, a dog, chickens and a goat, but caring for a wild hare was something new.

‘It’s a bit like what I can imagine having a small kangaroo living in the house would be like, when she got bigger,’ Natasha said.

‘It’s not really like having a little bunny rabbit that quite happily hops around your lounge, she’s definitely far more a wild animal.

‘And things are very much on her terms – if she didn’t want you to touch her, that was it, but if she fancied having a little cuddle she’d come and jump up and sit on your lap.’

The family eventually released Clover towards the end of June, into fields at the back of their garden.

‘She hopped off and we thought we might see her once or twice but to our surprise she comes back on a daily basis pretty much to come and say hi.’

Get int touch at metrolifestyleteam@metro.co.uk.