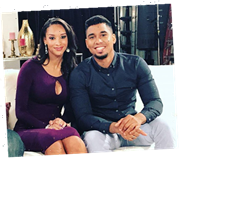 The news that many have been waiting for has finally arrived, and some fans couldn’t be more excited. From the family that brought the famous dinner fight, to Chantel Everett’s memorable tell-off of Pedro Jimeno’s sister, Chantel and her family are back. The Family Chantel, which follows Chantel and Pedro as they navigate the murky waters of marriage, is coming back for season 2, and the premiere is right around the corner.

When will ‘The Family Chantel’ return?

Fans were first introduced to Chantel and Pedro in season 4 of 90 Day Fiancé. They became instant fan favorites, and made their way to 90 Day Fiancé: Happily Ever After before scoring their own spinoff. Pedro, Chantel, and her family are more than memorable, and have provided fans with awesome sayings for years, including, “Stupid Americans” and “The Family Chantel.”

The highly anticipated new season of The Family Chantel will return to TLC on Monday, October 12, at 10 p.m. E.S.T. Chantel will be joined by her equally famous family, including her mother, Karen, who has quite a following herself.

The new season will feature some new faces, including Chantel’s other brother, Royal, who is older. He returns home with a woman named Angenette, who is from the Philippines. They met online, and it sounds like there is going to be some major drama in this new family dynamic. The Family Chantel will embark on a trip to the Philippines for Royal’s second wedding, which sounds like it will be more than eventful.

So I've been keeping a secret from you guys. ? I'm so glad that I can finally tell you that we are going to air our 2nd season of The Family Chantel. ??? . . . . . #thefamilychantel #chantelligence @tlc

Reddit is buzzing about Chantel and Pedro’s new show, but not everyone seems to be on board with it. A Reddit user recently posted a screenshot sharing the news via 90 Day Fiancé’s social media, and while some fans say they will watch, there is a lot of hate on Reddit for the upcoming season.

“I watched the show and found it entertaining. But I am actually really surprised they got a second season,” a fan on Reddit said.

Another fan also finds it humorous. “Yeah I thought it was funny too,” said a fan.

However, not everyone seems to agree. “Thanks for giving me more reasons to turn off my TV TLC. I feel like you’re giving me an intervention,” another Reddit user wrote.

Other fans clearly won’t be watching. “Haven’t we suffered enough in 2020? Why do you hate us, TLC?” a user asked.

“Super hard pass! I didn’t even watch the first one,” another Reddit user said.

Chantel Everett shares the news with her followers

Chantel Everett posted the image for the new season sharing the announcement with her followers on Instagram, and fans there couldn’t be more thrilled with the news.

“So I’ve been keeping a secret from you guys. 🙈 I’m so glad that I can finally tell you that we are going to air our 2nd season of The Family Chantel. 🎉🥳🎉,” Chantel captioned the post on Instagram.

“So excited for season two!!! You look stunning,” a fan commented.

A lot of fans really seem to love Chantel and Pedro. “So excited girl I love you and Pedro! My favorites! ❤️,” said a fan.

“Yay best family from 90 Day Fiancé,” someone else wrote.

There is a lot of speculation about the promo image for the new season, which features the family standing side by side. However, Royal and Angenette are standing to the far left, prompting a lot of fans to ask about who they are.

“Who’s that on the far left?” a fan wondered.

“Who are the two people on the left end?” another fan inquired.

A lot of fans have opinions about The Family Chantel’s renewal. Some can’t wait, while others admit that they won’t be watching the new season.