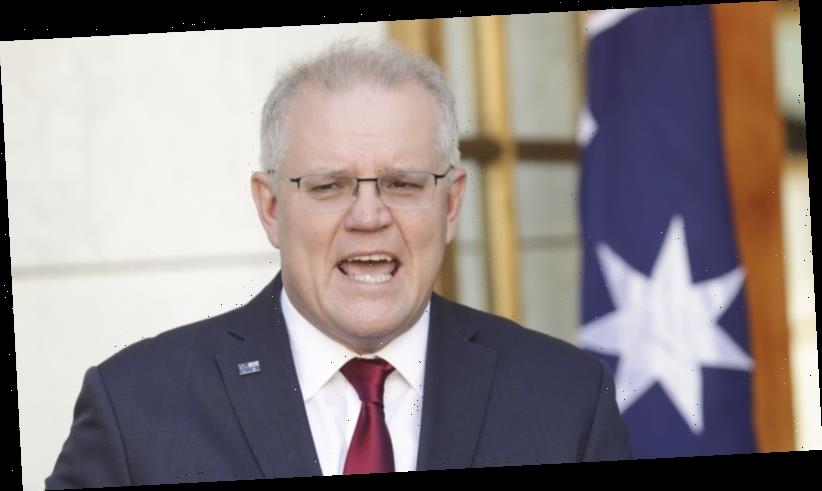 People weary of the deteriorating relationship between Australia and our largest trading partner often ask: what is Australia's China strategy?

The relationship is at its lowest point since diplomatic relations began with the People's Republic of China nearly 50 years ago. 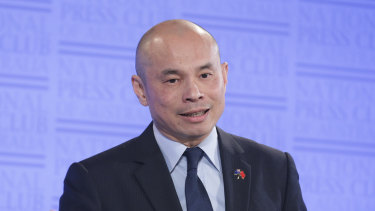 Wang Xining, Deputy Head of Mission from the Chinese embassy in Australia, during his address to the National Press Club of Australia in Canberra on Wednesday.Credit:Alex Ellinghausen

We are in the diplomatic freezer: Prime Minister Scott Morrison, Foreign Minister Marise Payne and Trade Minister Simon Birmingham are unable to get a phone call with their direct counterparts. Meanwhile, Beijing has hit Australia with three major trade strikes and threats of tourism and student boycotts during the global pandemic.

On Wednesday, China's deputy ambassador in Canberra, Wang Xining, delivered an impressive performance at the National Press Club that was somewhat conciliatory towards Australia.

Surely in a week when China was offering a detente, we would see it as an opportunity to improve relations and not go about doing something that would further anger Beijing? Well, only if you haven't been paying attention.

If China truly wanted to make some meaningful overtures to Australia this week, they would have sent out someone more senior than Wang. As an erudite and scholarly English-speaker, Wang's task was to present a more friendly image to Australians, including the Chinese diaspora.

Trust in China over recent years has plummeted, with an annual Lowy Institute poll finding only 23 per cent of Australians trust Beijing to act responsibly in the world – falling from 52 per cent just two years ago.

Wang had no message for the Australian government – he is too junior to be given that task.

So what is Australia's plan?

Firstly, our strategy starts on the basis the prior relationship with Beijing was getting farcical towards the end. While we enjoyed the riches of sending our raw material to China, we let the Chinese Communist Party commit wide-scale foreign interference within our shores and grow increasingly assertive throughout the Indo-Pacific region.

Australia would prefer not to be in the diplomatic freezer, but it is prepared to play a long game. It doesn't want to restart leader-to-leader and minister-to-minister dialogue with Beijing if it means Australia cannot talk about any of the major flashpoints in the region which are within our sphere of interest. We sail through the South China Sea; we have 100,000 citizens living in Hong Kong; we don't like the precedent set by forcing more than one million Muslim Uighurs into internment camps.

During this period of diplomatic hostilities, the Morrison government is effectively laying down some markers. It is reserving the right to keep talking about these issues under any diplomatic detente.

There is also an acknowledgement that China's rise was going to make the next few decades incredibly difficult to navigate – absent our complete acquiescence or not – so we might as well further our national interests while we have the chance. Now is the time to act on issues like the South China Sea and Hong Kong – before it is too late.

It is also worth pointing out that there are still regular talks between Australian and Chinese officials. It has slowed somewhat during the coronavirus, but dialogue is still happening on a weekly basis – it's just not occurring on a political level.

In any of these backdoor channels, Australia could send a signal that it will not talk publicly about issues such as the South China Sea and Hong Kong, in return for talks suddenly resuming at the political level. The Morrison government has decided not to do this.

So broadly speaking, Australia's strategy is to reach a landing point where diplomatic talks resume under a more honest relationship where we reserve the right to counter foreign interference and talk about the major flashpoints in our region.

In truth, China doesn't care about the United States in the sense that it knows it can never control its actions as a major power. But Beijing wants to make an example of Australia to send a message to other middle powers thinking about countering its growing assertiveness. Australia was the first to ban Chinese telecom giant Huawei from next-generation networks, first to enact foreign interference laws and ahead of the curve on blocking foreign investment in critical national infrastructure.

The question for the Morrison government is this: how long is it prepared to wait in the diplomatic wilderness?

Get our Morning & Evening Edition newsletters

The most important news, analysis and insights delivered to your inbox at the start and end of each day. Sign up to The Sydney Morning Herald’s newsletter here, to The Age’s newsletter here and Brisbane Times‘ here.