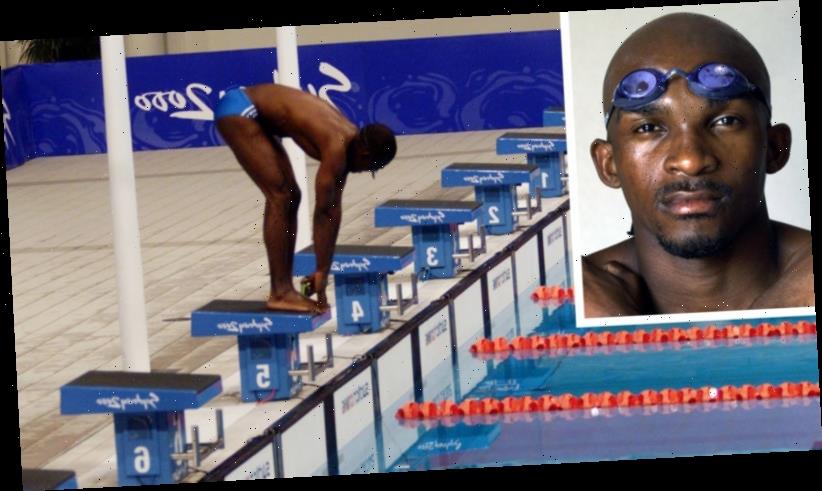 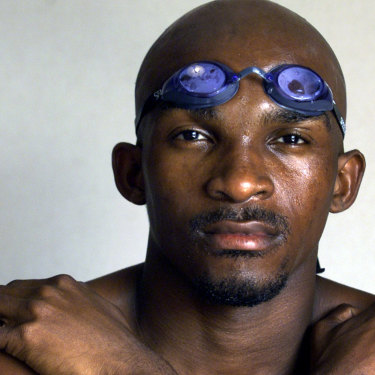 Eric Moussambani, pictured in 2001 ahead of the FINA World Championships. Credit:Craig Goling

Here's an Eric the Eel fact that will blow your mind. In the six years after Equatorial Guinea's most famous swimmer almost sank in the 100 metre freestyle at the Sydney Olympics, Eric Moussambani got better. A lot better.

In fact, it's fair to say Eric the Eel became the real deal.

That personal best time would have not only put him fewer than four seconds shy of 100m gold medallist Pieter van den Hoogenband in 2000, it would have been enough for Moussambani to have won a gold medal at the 1968 Olympic Games, and every single Olympic Games before that. 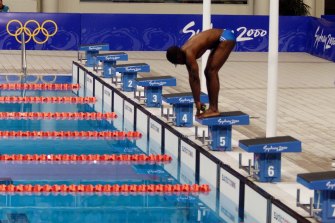 Eric Moussambani at the starting block after other swimmers in his heat were disqualified.Credit:Vince Caligiuri

Yes, you read that right and, yes, we are talking about the same Eric the Eel; the shy African swimmer who shot to stardom by barely staying afloat during the last 25 metres of his heat in the blue riband event almost 20 years ago.

The Herald tracked down Moussambani, who still lives in Malabo, the capital city of Equatorial Guinea.

The WhatsApp reception isn't great but there's plenty to catch up on.

Moussambani has four sons, works at a petroleum company and trains aspiring Olympians for up to 30 hours a week as Equatorial Guinea’s national swimming coach.

He may have hung up the goggles – his ones from Sydney fetched a cool $4638 for charity a few days after his famous swim – but his story is incredible in many ways. 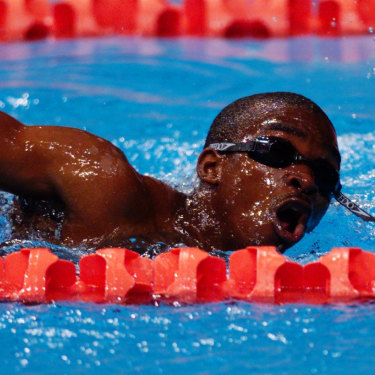 No one in Olympic history had ever recorded a slower time than his 1:52.72 but the 17,500 vociferous fans at the Sydney Olympic Park Aquatic Centre could not have cared less. They cheered Moussambani home like he was Thorpe.

The time was 64.54 seconds slower than Michael Klim’s world record and, while Thorpe could have swum the distance twice and still touched the wall in front of Moussambani, it must be remembered Eric the Eel had only taken up swimming nine months earlier, in a 20-metre hotel pool. Moussambani was training in rivers prior to Sydney.

But what few people know is that by 2004 Moussambani halved his personal best time to 56.9. And a couple of years later, Moussambani says he got it down even lower.

“They invited me to Düsseldorf in Germany in 2006 for a show. I had to swim 100 metres with others swimmers and I did it in 52.18,” Moussambani told the Herald. “That was my best time. I didn’t go any better.”

That, to anyone who remembers his performance in Sydney, is nothing short of incredible. 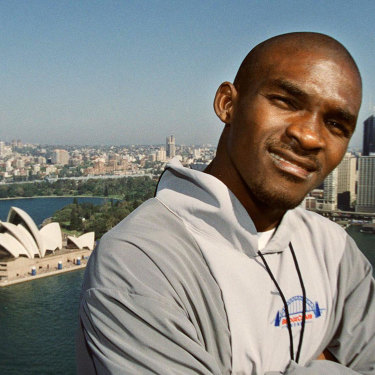 The time would have earned him first place in every men's 100m freestyle event from the 1896 Athens Olympics (1:22.2) all the way to Mexico City in 1968 when Australian Mike Wenden won gold in a world-record time of 52.2.

And while it changes the picture to learn Moussambani was a genuine athlete the whole time, his against-the-odds performance in Sydney still defines him.

He may not have an Olympic medal but few have ever displayed the same amount of never-give-up Olympic spirit as Eric the Eel.

“In that last 50 metres, to be honest, I was so tired I was going to stop,” Moussambani said. “I couldn’t feel my legs or arms, everything was very heavy. When I had people clapping and cheering my name, that gave me more power to finish.

“After the race I went to the changing room and I laid down because I still couldn’t feel my body. I went back to my apartment in the Olympic village and I slept from 11am to 4pm. When I woke up, on the television I could see my pictures. I thought I did something wrong.

“When I went to the Olympic restaurant where the athletes eat, that’s when people started asking me for autographs and pictures. That’s when I realised I became very famous.

“That was a big experience for me because I used to be a very shy guy. People started to look for me in the village.” 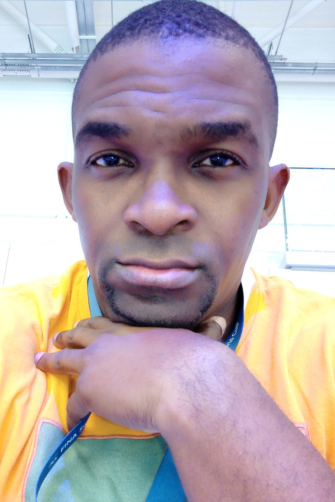 The fun had only just begun for Moussambani, who soaked all up all the perks.

There were autographs, a photo shoot with Speedo, which presented him with a full-length swimsuit, a party with Thorpe and other Australian swimmers in Bondi – “no beers, just Coca-Colas” – a Harbour Bridge climb – “that was amazing” – as well as a surf at the country's most famous beach.

“I think it will be safer for me in the surf than in the pool,” Moussambani told reporters on the sand at Bondi.

“Are there any sharks?”

Considering Moussambani used to also train in crocodile and snake-infested rivers back home, a shark at Bondi wouldn't have been too big an issue.

And how about this one-liner when a journalist asked Moussambani if he'd spoken to his girlfriend back in Africa.

“She asked me if I had another girl in Sydney,” Moussambani said. “But I told her, ‘Not yet’.”

A passport issue robbed Moussambani of the chance to swim at Athens in 2004. Gone were the sponsorship deals and autograph-signing tours of Europe.

He is still upset he couldn't show the world how much he had improved. 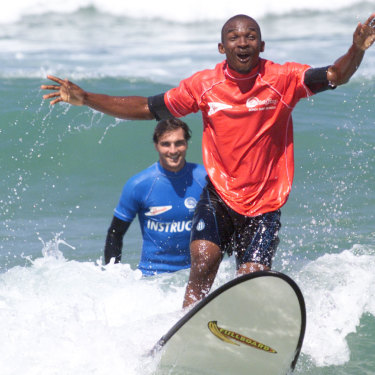 Eric the Eel enjoys a day out surfing at Bondi Beach. Credit:Danielle Smith

The Sydney swim has been viewed millions of times on YouTube, while Roy and HG's delayed call of the effort is one for the ages.

Moussambani keeps the raw footage on a personal hard drive in a special place in his home.

“At the time I didn’t know anything,” Moussambani said. “It wasn’t bad because it was the beginning of my experience. Looking at it now, I did not have any technique for swimming. I didn’t know how to coordinate my arms or legs and my breathing. Now I have a lot of experience to swim and how to be very calm in the pool.”

He was just happy to tell the world about Equatorial Guinea, which fielded four athletes at the Sydney Games.

Moussambani is a celebrity in his home country yet barely recognisable elsewhere. However, if he were to say he hailed from Equatorial Guinea, it wouldn't take long for many Australians to join the dots and work out who he was. 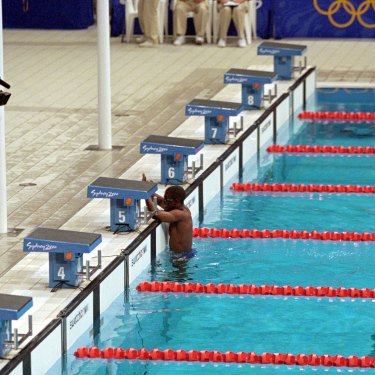 At the conclusion of the 100-metres freestyle event, Moussambani was exhausted. Credit:Getty

“People didn’t know about my country … and now everybody knows about Equatorial Guinea and I’m very proud,” Moussambani said. “I found people in Sydney were very kind. People invited me to many places.

“When I went to a mall in Sydney, I wanted to buy a tennis shoe. The owner told me that it was a gift for me. I appreciated that.”

Equatorial Guinea did not have a single Olympic-sized swimming pool 20 years ago. Now, two have been built; one in Malabo and the other in the country’s largest city, Bata.

All Moussambani wants in his lifetime is to see a swimmer from his country win an Olympic medal. He knows that may be unrealistic, but who would've believed his personal best would come down by a minute?

“I’m trying to do my best for my swimmers. It’s a lot of work to do,” said Moussambani, who is hoping Equatorial Guinea can send four swimmers to Tokyo next year.

“If we have two or three swimmers, there is not enough chance we will win a medal in the Olympic Games. When it comes to African Games, yes, we have a chance. For Olympic Games, if we have 12 good swimmers, we may have an opportunity to win a medal. 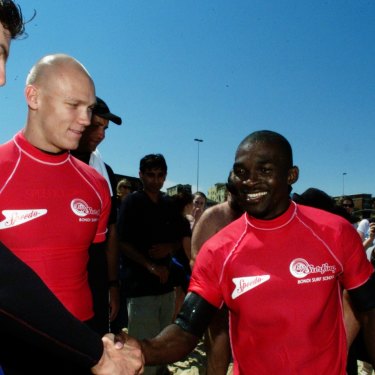 “When I used to train my guys I would show them my race. But my swimmers always look at Michael Phelps. We always put his videos up. I met Phelps three times. The first time was in Fukuoka [at the 2001 World Swimming Championships]. He was the best. The disadvantage though is my swimmers are not tall like Phelps.

“When I was preparing for the Sydney Olympics I didn’t have a swimming pool. I was swimming in the beach or the river. Our swimmers have an opportunity to swim in a pool now, so when they go to an Olympic Games they won’t be scared like I was.

“I would love to see Sydney again. I’ve travelled a lot to other countries but for 20 years I haven’t been to Australia. Maybe next year.”

We'd be more than happy to have you, Eric.