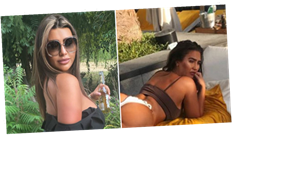 Lauren Goodger has showed off her incredible hourglass figure in a series of snaps from a holiday she went on to Dubai last year.

The 33 year old, who recently signed up to X-rated adult subscription site OnlyFans, took to her Instagram Stories to post the saucy photos, where she can be seen in nothing but a tiny two-piece.

Lounging on a chaise longue with a mustard-yellow cover on it, the star could be seen wearing a brown bikini top with a thong-like white bikini bottom, highlighting her peachy derrière.

In one photo the star could be seen adjusting her position on the beach chair, giving the camera a full view of her plump behind as she got comfortable.

Another saw the former TOWIE member sitting up to reveal her flat stomach, while a third showed Lauren lying down on her front while smiling back at the camera.

The reality star, who was recently left outraged after claiming steamy snaps were reported and removed from Instagram, told her 752,000 fans that she sadly won't be going on any holidays this year.

She wrote: "No holidays this year! Only way I am keeping bronze is @lgbeauty !!! Honestly gives me the best colour!!!"

Despite looking gorgeous in the barely-there bikini, Lauren recently shockingly revealed she “hates” her body.

The raven-haired beauty got honest about her insecurities during a Q&A session with fans. When a devoted follower gushed, “Never seen anybody so perfect inside and out,” she replied, “I’m far from perfect! Hate my body at minute.”

And when another fan asked her what she does to keep in shape she said, “I’m in worst shape at the min!!!”

A source close to the star also told new magazine that Lauren is feeling far from confident. “Lauren hates her body at the moment,” revealed the insider.

"She thinks her bum and boobs are huge and she just feels short and dumpy. I know Lauren loves her eyes at the moment, but that’s all.”

Like most of us, new's source added that Lauren has been feeling sluggish after the country was put into lockdown back in March.

“She definitely feels like this is because of lockdown,” continued the pal.

“She feels much more lazy, has much less energy and is more hungry! It has made such a difference to her mood and it’s not good.”