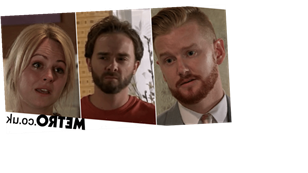 ‘Awks’, said David Platt (Jack P Shepherd) when he walked into his house to find Gary Windass (Mikey North) dressed up in a suit on the morning of his wedding to Maria Connor (Samia Longchambon), confessing his love to Sarah (Tina O’Brien).

And he’s not wrong. But will he destroy the latest Coronation Street wedding by revealing the truth to the oblivious bride?

Sarah has been in bits after Adam Barlow (Sam Robertson) ended their marriage after she refused to shop killer ex Gary to the police.

Gary was left wondering how much Sarah had told Adam when the solicitor aggressively told his nemesis that he was welcome to her.

As Maria excitedly prepared for her big day, Gary was at the house of his ex, asking her what had happened with Adam and establishing that she was now a free agent.

As Sarah refused to be drawn on Gary talking to her about her true feelings, she broke down in tears but admitted she would always protect him as they have been through so much.

But as she referred to the moment recently when Gary said he still loved her and always wood, David walked in, having overheard.

Gary looked positively caught out as the power is now in David’s hands to save Maria from a marriage that can only break her heart.

But what will he do?