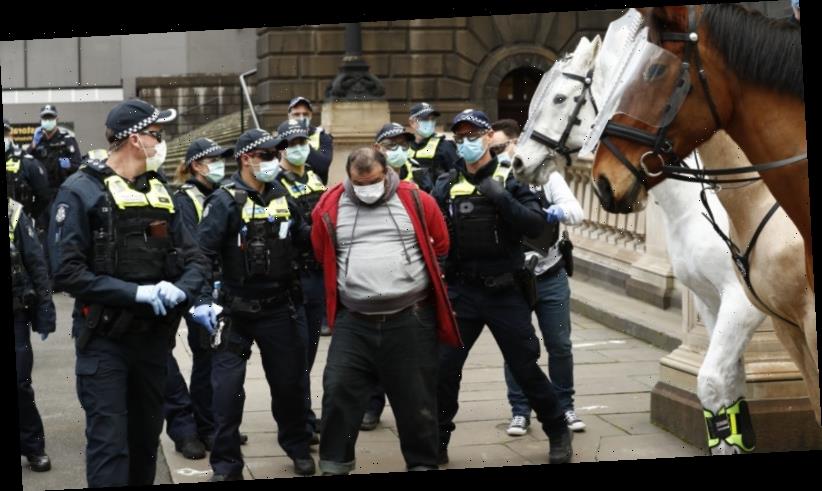 Six protesters have been arrested at an anti-lockdown protest in Melbourne's CBD on Sunday.

Attendees at the Melbourne Freedom March claim their rights are being compromised by the coronavirus restrictions. 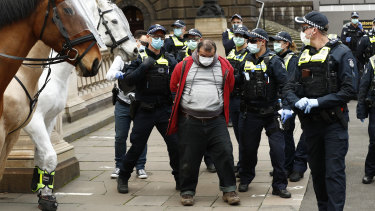 Police also issued 27 fines for breaches of the Chief Health Officer’s directions at the protest outside the Victorian Parliament House.

The protesters were arrested after they refused to provide their details to police. They were all released after they provided the information and fined $1652. 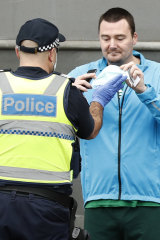 A man is confronted by a police officer at the anti-lockdown protest.Credit:Darrian Traynor/Getty Images

One of the event organisers is expected to be charged on summons with further offences. This man is not one of the two organisers who were arrested on Thursday.

Twenty-four of the fines were issued for leaving home for a non-essential reason. One person was fined $200 for not wearing a mask.

In a statement released on Friday morning, a spokeswoman said an investigation was launched to find those responsible for organising the gathering.

Officers raided two properties, one in Mooroolbark and another in Chirnside Park, where mobile phones and a computer were seized.

They charged a 41-year-old man from Mooroolbark with incitement. The offence, in the Crimes Act, involves a person inciting someone else to pursue a course of conduct which will involve the commission of an offence. 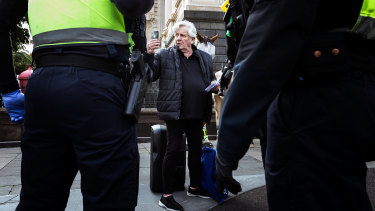 Police question members of the public not wearing a mask in Melbourne’s CBD.Credit:Darrian Traynor/Getty Images

The man was bailed and is due to appear at the Melbourne Magistrates Court on January 21 next year.

A 41-year-old male from Chirnside Park was also arrested on Thursday night, but was later released.

Police said he was expected to be charged on Friday with the same offence, but have not yet confirmed this.

Police warned on Friday that anyone who attended the protest would be fined or arrested for the "completely flagrant breach" of the Chief Health Officer's directions.

Police also arrested and fined a man in a stolen car in the CBD on Sunday. He was not linked to the protest.