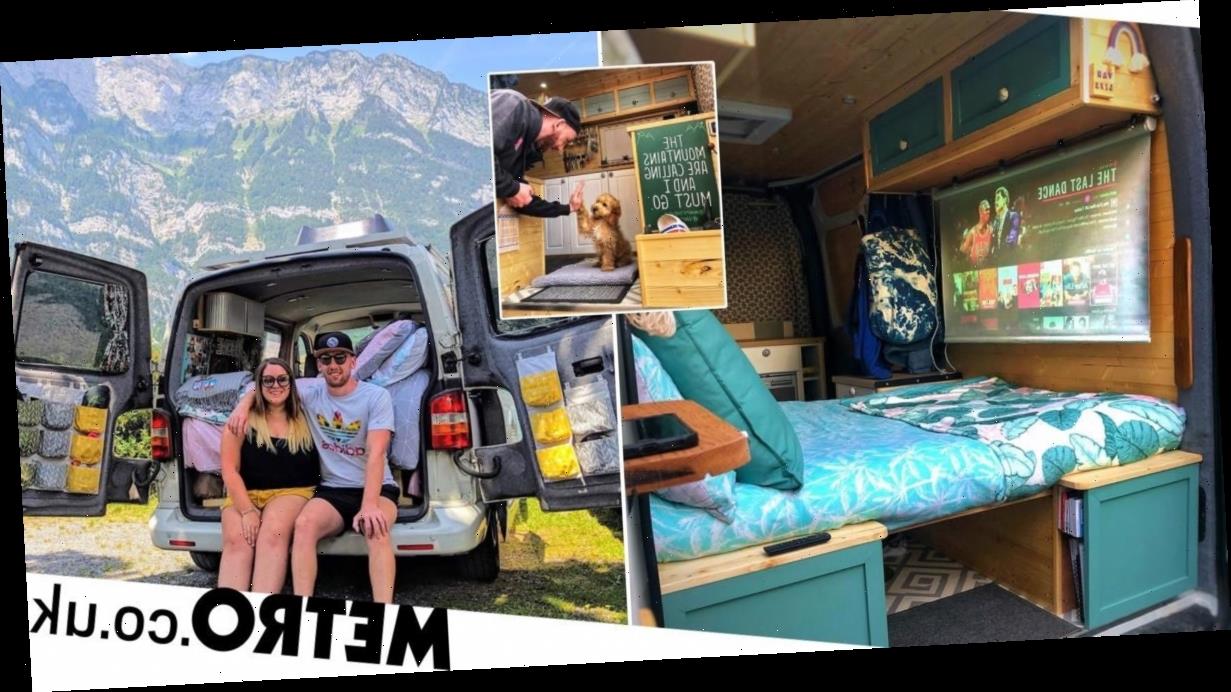 Even when Harriet Evans, 28, and Josh Wycherley, first met, they were both fed up of working traditional nine-to-five jobs.

The couple met seven years ago while working at an adventure camp in Hindhead, Surrey, and bonded over a shared desire to ditch traditional working lifestyles and explore the world.

In 2018, they decided to make that dream a reality. They bought a van from Gumtree, spent six months turning it into a mobile home, then hit the road.

Six months and 18 countries later, that van conked out beside an Italian motorway, so Harriet and Josh fixed it up and traded it in for a bigger and better model – a motorhome they call Monty.

After months of taking odd jobs to save up money, the pair’s plans to head off again in April were wrecked by the coronavirus pandemic.

They’ve decided to think of this as a momentary pause, rather than a full stop. The couple plan to keep up their adventurous lifestyle once things go back to ‘normal’.

Harriet says: Josh and I are at the age now where a lot of our friends are settling down, having children and getting mortgages, so there is part of us that sometimes thinks, “Are we doing the right thing?”

‘But the amazing freedom that comes with van life far outweighs that. Aside from right now, while travelling is on pause, we can go anywhere we like.

‘If we don’t like somewhere, we simply move on, or change direction. There’s something about waking up every day without a plan that’s really liberating.’

Harriet, originally of Portsmouth, Hampshire, and Josh, of Telford, Shropshire, first met back in 2013, after landing jobs at PGL – an adventure camp specialising in school trips, activity holidays and outdoor education, requiring employees to live at the Surrey centre.

Spending a lot of time together, they forged a tight bond and soon became a couple.

But, while they loved their active jobs, which offered plenty of variety, they still had itchy feet to create an adventure of their own.

Josh said: ‘After a few years, we just thought, “What are we doing?”

‘No disrespect to anybody that wants to work and doesn’t prioritise travel, but we wanted to get out there and see the world. We thought there must be more to life than the daily grind.’

Josh already had a vehicle, but it was too small to adapt into a home, so they traded it in for a better model they had spotted on Gumtree and customised it to fit their needs.

‘It was like a little red Postman Pat van,’ he explained. ‘The guy advertising the van we got needed one like mine, so it worked out really well. We pretty much just swapped vehicles.”

To save up for their trip, they continue to work at PGL while slowly renovating their Volkswagen Transporter van over a six month period, until they had turned it into a fully-fledged home on wheels.

Doing everything themselves, the pair fitted the vehicle with a double bed, a kitchenette and fridge and several cupboards for storage.

Then, in May 2019, they quit their jobs and set off on their epic journey.

‘It was quite a scary feeling – scary, but exciting,’ says Harriet. ‘Getting used to the practicalities and logistics of the space and where to put everything took a while, too.’

Originally, the couple had planned to be on the road for six months, but disaster struck after just three, when they broke down at the side of a motorway in blazing 32 degree heat.

Luckily their insurance covered flights back to the UK and the cost of having the van sent back over, too.

They carried out repairs then swapped that van for their new motorhome, Monty.

‘We loved that first van, but it was just too small,’ says Josh. ‘It was gutting to break down and have to come home early, but this was our way of turning a bad situation into a good one.

‘We had some money left in our travel pot, as we’d saved for six months but only been away for three, so we used that to both fix up the old van and buy a new one.’

In September 2019 – a month after returning home – Harriet and Josh spent £2,500 on Vauxhall Movano, Monty, which they transformed in just four weeks, fitting a wooden seating area that flattened to become a double bed, a kitchenette complete with a stove and fridge and a sink, shower and toilet.

Unlike the earlier van, Monty also has air con and a heater, built-in WiFi and even a projector screen – so they can watch Netflix on the beach.

The couple took on odd jobs to save funds so they’d be able to head off again, with Harriet joining and office and Josh finding work in a leisure centre.

They adopted a cockapoo puppy, Hudson, and got ready to set off – then Covid-19 hit.

Now, as they wait for various borders to reopen and for travel to be deemed safe, they are staying in Telford, Shropshire, where Josh is working in a warehouse and Harriet is tweaking the van to maximise their storage space.

The couple can’t wait to hit the road again.

‘Renovating the van and hitting the road was a leap of faith, but it’s the best thing Josh and I have ever done,’ says Harriet.

If you fancy following the couple’s journey, you can check them out on Instagram.