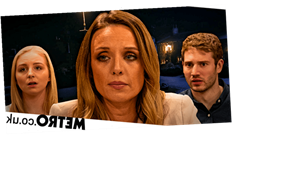 Andrea Tate (Anna Nightingale) has been hellbent on revenge in Emmerdale ever since she discovered her husband Jamie (Alexander Lincoln) was having an affair with Belle Dingle (Eden Taylor-Draper) and was planning on leaving her.

She has sworn revenge on her cheating spouse – having enlisted the help of Leyla (Roxy Shahidi) – with a plot which sparks a trail of devastation.

She’s set to disappear following the revenge plot, however – so have we seen the last of Andrea?

Here’s what you need to know…

As it stands there’s been no suggestion or confirmation that we’re about to bid farewell to Andrea.

However things are set to get pretty dramatic in the wake of her revenge plot against Jamie and Belle.

This week’s episodes have seen Andrea expose the affair at the pub quiz at the Woolpack, with Leyla collecting everybody’s phones, but secretly pocketing Belle’s, in addition to a USB stick.

Later, a screenshot of a text conversation between Jamie and Belle was displayed in the pub for all to see – exposing their infidelity to everybody.

While Andrea pretended to know nothing about it, feigning devastation at the text, Jamie blamed Belle, despite her proclaiming her innocence.

Andrea might have succeeded in driving a wedge between the lovers but matters are set to be complicated when she disappears in tonight’s episode.

What will happen next? You’ll just have to keep watching to see…

Emmerdale continues on Wednesday night on ITV at 7pm.