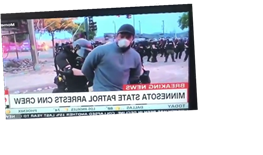 A coalition of more than 100 state and national news organizations, including all of the major networks, are calling on state officials in Minnesota to “end the series of police arrests and attacks on credentialed and clearly identifiable journalists in your city in recent days.”

The incidents against reporters covering the protests of the death of George Floyd continued through the weekend, even after the Minnesota Governor Tim Walz apologized for the arrest of CNN’s Omar Jimenez and his crew while they were live on air early Friday. Reporters from an array of different outlets have been arrested or physically assaulted.

“Police have arrested, detained, and threatened journalists, and have physically assaulted them with rubber bullets, pepper spray, tear gas, batons, and fists. In every case that we are aware of, there are strong indications that officers knew the journalist was a member of the press,” the news organizations said in the letter (read it here). It was sent by the Reporters Committee for the Freedom of the Press, and addressed to Commissioner Paul Schnell of the Minnesota Department of Corrections and Karl Procaccini, general counsel and deputy chief of staff to Walz and lieutenant governor Peggy Flanagan.

The letter points to other more than a dozen other incidents in Minnesota, including Linda Tirado, a freelance photojournalist, who “lost an eye to a rubber bullet as she was clearly in the act of photographing police.” Carolyn Cole, a photographer for the Los Angeles Times, was injured on Sunday when she and reporter Molly Hennessy-Fiske were doused with pepper spray and rubber bullets at point blank range.

“I’ve been covering conflict both nationally and internationally for many years, so I know the dangers involved in these situations, especially when you get between riot police and protesters, but I wasn’t expecting them to attack us directly,” Cole wrote. Molly was hit twice with rubber bullets. Another photographer had a bloody face.”

Members of the local media also reported incidents, including KTSP reporter Ryan Raiche, who was tear gassed and pepper sprayed, and Star Tribune reporters Chris Serres, who was tear gassed, shot with rubber bullets, and forced to the ground at gunpoint, and his and colleague Ryan Faircloth, whose car was shot by rubber bullets, shattering the window and causing lacerations.

The targeting of journalists covering protests has been reported throughout the country over the past five days, far surpassing incidents in recent years. The US Press Freedom Tracker is looking into dozens of incidents. A spokeswomen said that they are trying to verify reports of at least 170 incidents since Friday, the majority of which are assaults, according to a spokeswoman. About 90 come from police, the spokeswoman said, and there have been about 30 arrests of journalists.

“Law enforcement officers do not have legal immunity when they violate clearly established rights under the First Amendment,” the letter from the media coalition states. “The right of the press to document police activity is foundational to our democracy and has long been recognized and protected by the courts. Beyond, however, the Constitution and the law, any targeting of reporters for doing their jobs— keeping the public informed during an extraordinary period of civil unrest— is beyond the pale in a free society.”

The media coalition is asking that state officials instruct officers and staff that “arrest or physical attack of a journalist who is compliant with reasonable police orders is a clearly established First Amendment violation.” They also are asking them to take “swift action to discipline any officer who is found to have arrested or assaulted a journalist engaged in newsgathering.”

They also say that officers “themselves could be subject to legal liability for violating these rights.”

Other groups, including the National Association of Broadcasters and SAG-AFTRA, have condemned attacks on journalists through the weekend.