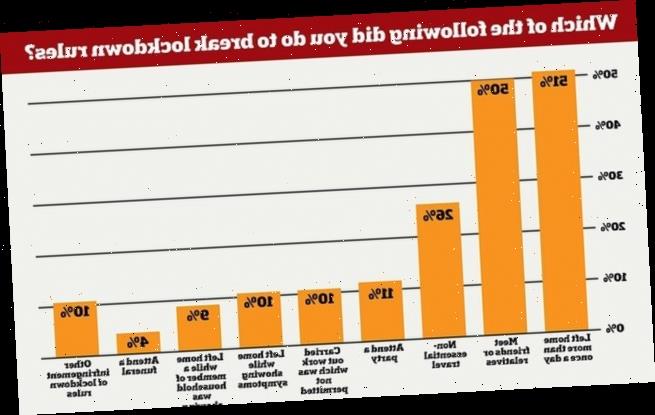 One in seven Brits admit to flouting lockdown restrictions in some capacity, it has been revealed.

A survey carried out by the Sun indicates that a third of people have been turning a blind eye to rules laid down by the government and not following rules to the exact letter amid the ongoing coronavirus pandemic.

Feedback shows many people have slipped out of quarantine in order to see parents, socialise with friends, or even address their sexual needs.

Another commonly reoccurring reason to sneak out of the house and violate guidelines was to have a much needed haircut, results have shown. 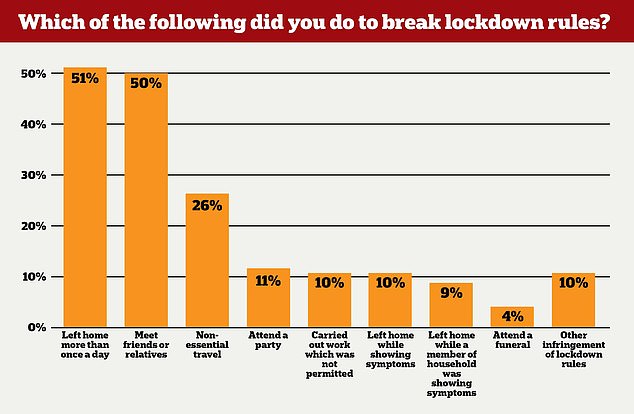 A survey has shown one in seven Brits have defied lockdown measures and gone about daily life, with 50 per cent of those asked saying they have been out to meet family and friends 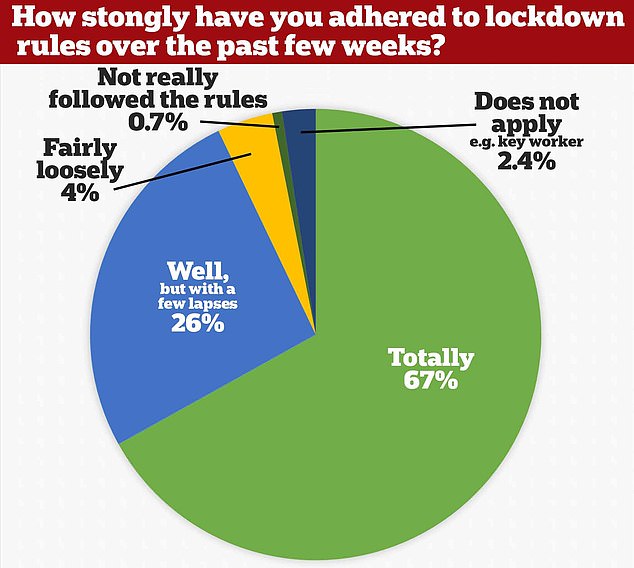 Results show 26 per cent of people think they have adhered to restrictions ‘fairly well’ but with lapses in their weekly routine, while 67 per cent feel they have complied totally

Fourteen per cent (one in seven of those questioned) admitted to breaking at least some of the rules.

Of a sample selection of people asked around the UK, 51 per cent admitted to leaving the home once per day, despite initial strict instructions to only venture out if absolutely necessary.

A total of 50 per cent also fessed up to going out to meet family and friends, despite the UK’s warning level of coronavirus spread being high.

Some 26 per cent admitted to non-essential travel, while an 11 per cent portion even revealed they had attended a party during lockdown. 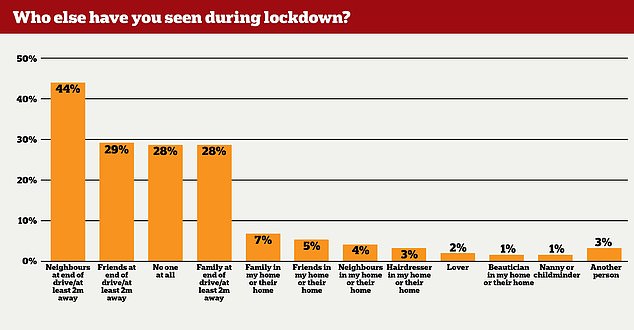 A large portion of people have interacted with neighbours, while 3 per cent admitted they have either visited or had a hairdresser come to visit them 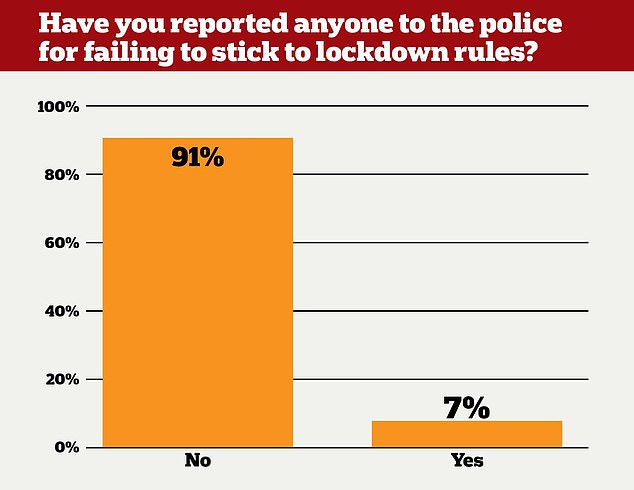 Smaller numbers went on record to admit they had left home while showing coronavirus symptoms, while nine per cent said they left the house to go about regular life despite a family member showing symptoms of the virus.

Reportedly one in ten people have fallen out with a friend or relative for not following the rules, causing tensions and disagreement.

Just two per cent of the 2,013 questioned by Onepoll confessed to meeting a lover when supposed to be remaining in self quarantine.

Of the sample size almost five per cent surveyed say they have been reported to the police by somebody for breaking lockdown rules.

A further seven per cent admitted to taking action into their own hands and calling up police to report the flouting activity of others.

A university student, Michael, who studies at the Royal Agricultural University, told the Sun: ‘We had friends round for a poker night… 15 of us drinking until 4am. The neighbours were suspicious but we said it was just us. It felt a bit wrong.

‘But the news about [Dominic] Cummings makes me feel less guilty now. We’d been isolating, we didn’t travel or have symptoms. Now I think what we did wasn’t that bad.’ 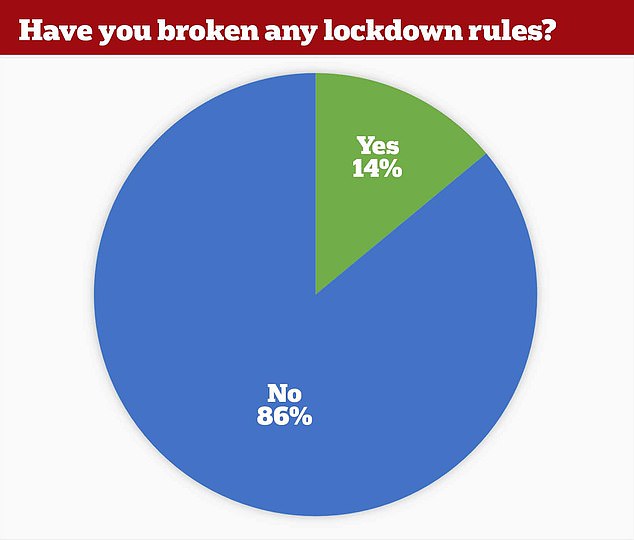 With the UK trying its best to get on board and flattening the curve, 86 per cent of people said they felt they had not broken any of the lockdown rules 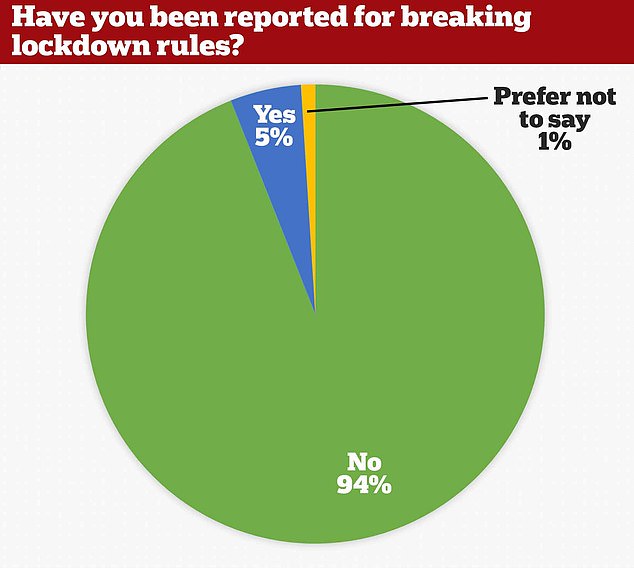 Mr Cummings, senior adviser to Prime Minister Boris Johnson, has repeatedly dominated the headlines following his personal flouting of the lockdown restrictions he helped to put in place.

Mr Cummings made a 260-mile trip from London to County Durham amid the coronavirus lockdown in March.

He admitted to taking a drive to Barnard Castle on April 12 – to test his eye sight before a 260 drive back to London.

The emergence of the news led to 55 per cent of Conservative voters saying he should resign from his position, as the Prime Minister’s own approval rating plummeted.

Another individual, named Kaleigh, told the Sun how she had been visiting her 50-year-old mother six miles away and would continue to do so.

‘I went in to help with a leaky tap and after that thought it was a bit silly not staying for a cuppa if I went round,’ said the 32-year-old. Helping her clean and providing regular contact outweighs the risks.’

Mum-of-three Kaleigh, who lives in Manchester, added: ‘I refuse to let lockdown stop me caring for my mum. I applied good sense and I’m not ashamed.’