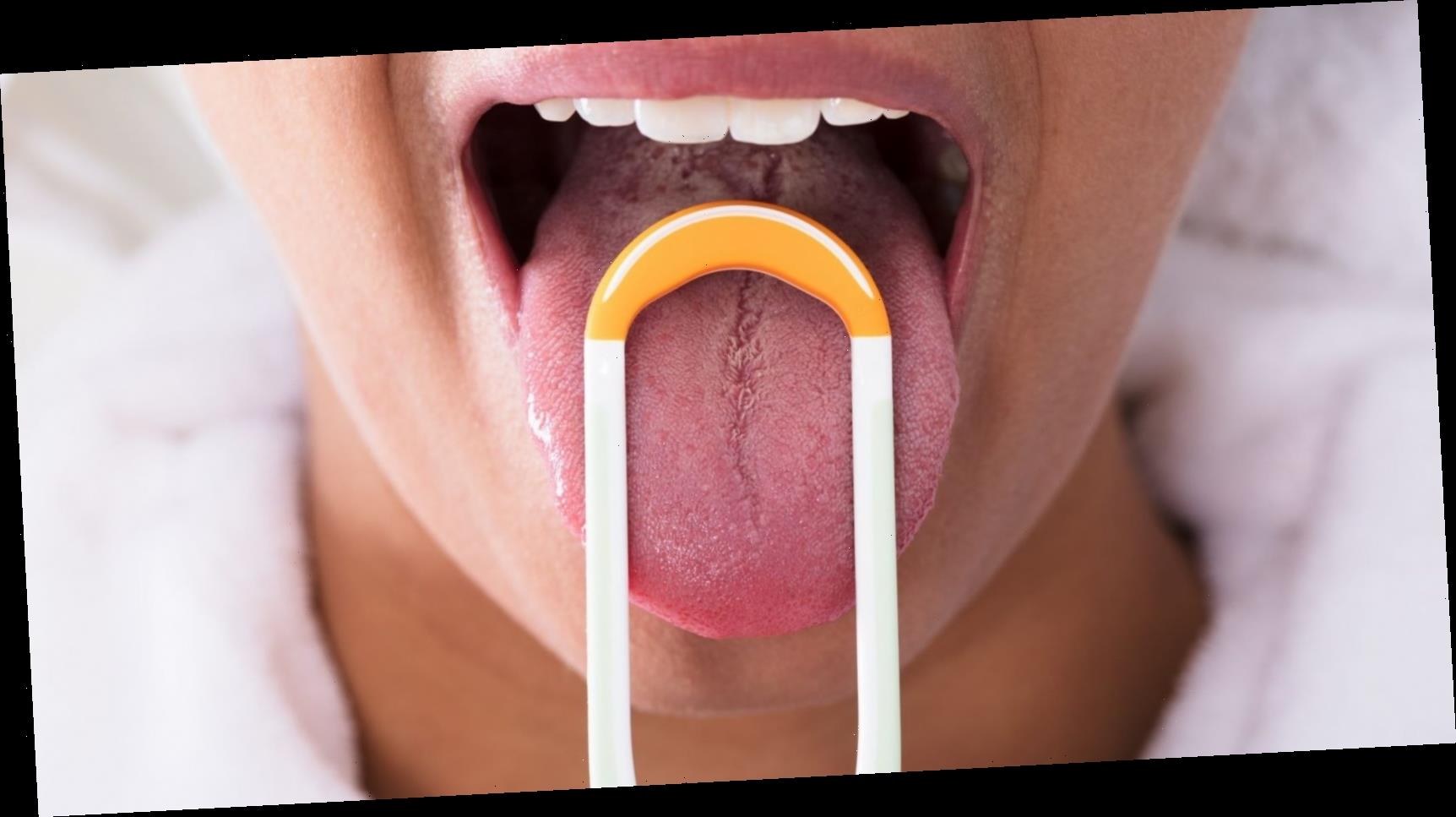 Tongue scraping is an ancient Ayurvedic ritual, but how exactly does it enhance oral health?

We wax lyrical about following a skincare routine, but how strict are you with a dental regime? We know about the benefits of brushing your teeth, mouthwash and dental flossing but there’s one step we don’t talk about as often: tongue scraping.

“Tongue scraping is when you use a scraping tool to remove a coating or residue that builds up over time on the tongue,” explains Dr Reena Wadia, an oral health expert and gum specialist.

We all have bacteria on our tongue. “The tongue is made up of lots of crypts, cracks and irregular surfaces so is an ideal site for the growth of bugs and bacteria,” says Dr Wadia. In fact, according to a study by Registered Dental Hygienist (RDH) magazine, you can have around 20 billion in your mouth at any given time. Of course, some of this bacteria actually helps to create a healthy environment in your mouth but some can be the cause a bad odour.

“These bacteria can produce things which taste and smell foul,” says Dr Wadia. “Halitosis or bad breath can be defined as an offensive breath odour. The two biggest causes of oral malodour include tongue coating and gum disease.”

Using your toothbrush on your tongue only moves the bacteria around. While mouthwash can help with bad breath, mechanical cleaning is needed to physically remove the tongue coating that builds up over time and also prevent it from returning. “The tongue is like a carpet, it needs to be cleaned regularly,” she says. “Tongue cleaning has an effect in reducing oral malodour caused by tongue coating.”

“If you neglect tongue scraping then you can experience a build up of excess debris which can cause your tongue to take on a white, coated appearance.”

Along with better oral hygiene, Dr Wadia says tongue scraping “can be a part of your mindfulness routine at the start or end of your day by getting rid of the build up of toxins and stress of that day.”

Tongue scraping is an ancient Ayurvedic ritual (holistic medicine and practices that originated in India), thought to have been practiced for thousands of years. In Ayurveda, it is believed that tongue scraping helps to remove Ama (toxins) that collect on your tongue and prevent you from swallowing them back into your system. It also claims that tongue scraping may help sharpen your taste buds.

“Older research suggests that using a tongue scraper twice daily can improve your sense of taste,” says Dr Wadia. “After tongue scraping, your tongue may be able to better distinguish between bitter, sweet, salty, and sour sensations.”

Keen to give it a go? Here, Dr Wadia runs through the steps to performing an effective tongue scraping routine:

1) Open your mouth and stick our your tongue as far as you are able to. This gives increased access to the tongue and ease of scraping. Avoid pointing your tongue as this decreases surface area and makes scraping less effective.

2) Grab the scraper and give it a rinse.

3) Holding the handle of the tongue scraper, place it on the back part of your tongue, then begin scraping.

4) Apply firm pressure to the tongue scraper and in one slow, smooth motion, pull the scraper from the back of your tongue to the front. The edge of the scraper will remove any coating or residue.

5) Rinse the scraper to get rid of any coating or residue.

6) Repeat this movement four to eight times. That’s the maximum number that should be enough for the day.

7) Clean it after use. This tongue scraper can be kept long term and should be periodically disinfected using boiling water.

If you’re an avid Stylist fan, you’ll know it’s not always possible to find an issue of our magazine. Often they’re gone before you head into work (they disappear fast!), or you live in a part of the UK where you can’t get your hands on a copy. Add to this the fact that millions of us are not commuting right now, and we wanted to ensure you don’t miss out on the magazine any longer.

Which is why we’re delighted to let you know that Stylist magazine is now available in a digital format, both for Apple and Android users, allowing you to download the full magazine directly to your smartphone or tablet, wherever you may be.

Pricing for our digital magazine starts at just 99p for a single issue, or £21.99 for a full year’s subscription –that’s less than 50p a week!Simply click on the link to activate your Stylist app download from either the Apple store or Google Play and enjoy!