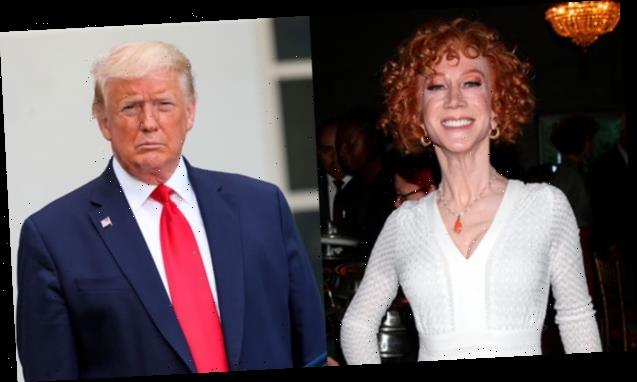 Right-wing Twitter users are demanding the Secret Service to check on Kathy Griffin, again. The comedian suggested that a ‘syringe with nothing but air inside’ should be used on Donald Trump.

It’s a double déjà vu: once again, Kathy Griffin took aim at Donald Trump and suffered the fallout. It all started on May 26, when Trump genuinely asked if he should be taking insulin while announcing Medicare co-pays for the hormone will be capped at $35 a month. Seeing that insulin is needed for people with Type 1 diabetes, CNN correspondent Jim Acosta mocked the POTUS by tweeting, “Trump at diabetes event at WH: ‘I don’t use insulin. Should I be?’” This is when Kathy jumped into the conversation on Twitter. Instead of insulin, the 59-year-old comedian suggested that a “syringe with nothing but air inside it would do the trick.” She added, “F–K TRUMP.”

Leaving her tweet up for interpretation, the Washington Examiner decoded Kathy’s controversial suggestion with this tweet: “.@KathyGriffin advocates for someone to stab with syringe full of air. Air embolisms, caused by air getting into the bloodstream, can be fatal.” Kathy didn’t deny this. “I SURE DID, F–KER,” she responded in a tweet, and for extra measure added, “#TrumpLiedPeopleDied.”

The violent implications of Kathy’s tweet shocked many people, primarily the right-wing side of Twitter. “Kathy Griffin posts a tweet that calls for the stabbing of President Trump with an air-filled syringe. Perhaps twitter should suspend her and take this tweet down? Just a thought,” one angry person tweeted, while others called for her “arrest” and a personal check up from the Secret Service. “I just hope she enjoys the company of the secret service ……… again,” another person tweeted, referring to the fact that the Secret Service already visited Kathy after she posted a photo of herself holding a fake decapitated head made to look like Trump’s in 2017. The picture, meant as a joke, changed her life forever. She lost a number of friends and jobs, including a hosting gig on CNN’s New Year’s Eve program that year. Even Anderson Cooper, a longtime friend of Kathy’s who was supposed to co-host the holiday TV event with her, called the photo shoot “disgusting and completely inappropriate.” But those weren’t even the biggest of Kathy’s problems.

“A lot of people don’t know this part. Actually two federal agencies, the Secret Service and the assistant U.S. attorney’s office, were putting me under a two-month federal investigation and considering charging me with a crime — this is real — of conspiracy to assassinate the president of the United States,” Kathy revealed after emerging from the severe backlash over the photo on The Late Show with Stephen Colbert in Dec. 2018. Even Trump personally attacked the stand-up comedian, tweeting in May of 2017, “Kathy Griffin should be ashamed of herself. My children, especially my 11 year old son, Barron, are having a hard time with this. Sick!”

After witnessing the immense consequences that Kathy suffered, people were surprised to see her risk another jab at Trump. However, others pointed out that a few tweets should not warrant a Twitter cancel party. “Kathy Griffin is an idiot for suggesting someone do physical harm to the President of the United States. But right-wingers calling for her to be prosecuted are forgetting that they spent a decade normalizing threats against [Barack] Obama and making fun of anyone who took them seriously,” another person tweeted, as others came to Kathy’s defense. “So trump can tweet baseless conspiracies about an msnbc anchor [Joe Scarborough] being a murderer and sat back as covid spread across our country killing almost 100,000 and injuring over 1.5 million. but people are made at kathy griffin…,” another such person tweeted. HollywoodLife has reached out to Kathy’s rep for comment, but did not hear back by the time of publication.