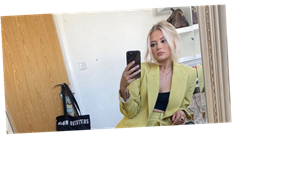 Lucy Fallon has revealed she is open to returning to Coronation Street if soap bosses will have her as the coronavirus pandemic has put a halt on her career.

The 24 year old made the decision to quit the ITV show back in May 2019, explaining that she would like "pursue other projects".

However, she's now confessed that the deadly bug sweeping the globe has floored her plans to appear in other shows and theatre productions.

Speaking to The Sun, the star explained that she's hoping there will still be a place for her to return to her role as Bethany Platt on Corrie in the future.

Get exclusive celebrity stories and fabulous photoshoots straight to your inbox with OK's daily newsletter. You can sign up at the top of the page.

"It was really difficult to make the decision to leave, but I’d been there for five years and it was all I’d ever known," she said.

“I’d never done theatre or anything away from Corrie and after the grooming storyline where I won quite a few awards, which was amazing, I realised if I didn’t leave and try other things I might end up wondering, ‘What if?’."

Lucy, who recently started selling clothes online after struggling to find work, continued: "But obviously Covid-19 has thrown it all up in the air now. As I left, work was starting to pick up and take off and now everything has stopped.

"But I do know there are loads of people in much worse situations than me and I’ve been very lucky.

"I’m trying to stay positive about it, but it’s obviously a bit sad having nothing to do."

The blonde beauty, who went a luxurious trip to Barbados following her exit from the show, turned to her co-stars Tina O'Brien, who plays her mum Sarah Platt on the show, as well as Sue Nicholls, who plays her great-grandmother Audrey Roberts, for advice.

She continued: "I’m not under any illusion that I’m going to be working forever and all these parts are going to come to me, but I spoke to a few people and they gave me the confidence to try.

"I’m very conscious of the fact that I don’t want it to sound like I see going back to Corrie as a back-up – that’s absolutely not how it is.

"I absolutely love that show and I would do it a thousand times over and I obviously would 100 per cent go back there in future if they will have me.

"It’s just about me spreading my wings in a way. And trying to live with no regrets."

Lucy added: "Corrie is the only part I’ve ever auditioned for and I was very lucky to get it, but I know that’s not always going to happen.

"At the moment auditions are all being done remotely so I’ve done a few self-tapes, including one today, and I’ve read for a new comedy which is still in the pipeline, so I’m hoping something will work out.”