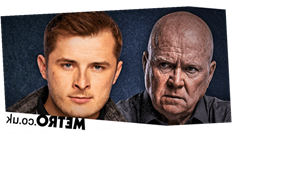 Phil Mitchell (Steve McFadden) doesn’t like it when people double-cross him in EastEnders, and this could well be something son Ben (Max Bowden) figures out the hard way, as he carries out a dodgy deal of his own in the coming episodes, and hides the package from Phil as a result.

Phil is seemingly in need of cash in order to purchase the Vic from Mick and Linda (Danny Dyer and Kellie Bright), so he decided to return to his old dodgy deals in an effort to raise the capital.

When Danny Hardcastle (Paul Usher) proved to be a right piece of work, the Mitchell hardman decided that it was about time he stopped underestimating Ben, and therefore offered him the chance to go into business with him once more.

The pair are preparing to pull of a shady job, and in the coming episodes, Ben interrupts a moment between his dad and Sharon (Letitia Dean) — who makes a resounding return — in order to have a word regarding the task at hand.

Later in the week, Phil puts more pressure on Ben — reminding him not to mess up the job.

Meanwhile, Ben does his own secret deal on the down low, and hides the package from Phil.

What exactly has he done?

What’s more, why is he hiding it from his dad?

Has he betrayed Phil?

If so, will Phil discover the truth?