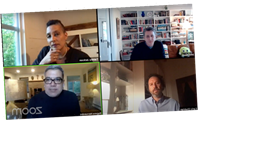 The industry is a long way from discovering how, or even when, the film festival circuit will return to any kind of functionality. Cannes is canned, replaced with a virtual market and potentially some branded tie-up with another event later in the year, and the summer festival calendar has been decimated by cancellations. Most of us are looking hopefully towards the trio of Toronto, Venice and Telluride as the moment the biz could restart, but those events have acknowledged that their 2020 editions will at least be different, if they manage to go ahead.

Realistically, the impact of the coronavirus is likely to be felt well into the 2021 calendar, particularly if the dreaded second wave becomes a reality. It was no surprise, then, to hear that top brass at three of the majors events scheduled in the next twelve months – January’s Sundance Film Festival, February’s Berlin Film Festival, and the closer New York Film Festival in September and October – are all spending plenty of time game-planning for a new reality post-pandemic.

“This year is so unpredictable,” conceded Chatrian, highlighting concerns about limitations on audience numbers if social distancing requirements remain in place when Berlin rolls around in 2021, as well as the potential impact of the current production shutdown.

“We don’t know how many films will be ready for our festival,” he said. “Berlin is a huge town and we rely a lot on our local audience, if we have to put in place stronger restrictions then it’s a different festival.”

Jackson also admitted there were likely to be major challenges in 2021, “Utah is a key component and that makes the planning very different… Utah in January in flu season, what are the realities of that? Trying to plan this far out when changes are happening every week…. it’s a moment. But everyone is willing us to succeed.”

On the production shutdown subject and a potential lack of available product, Jackson said there could also inversely be a surplus of product, if the upcoming fall festivals are unable to take place in a meaningful way.

“I can’t tell if it’s going to be feast or famine this year, depending on what happens with the fall festivals. I’m interested to see what we’re offered,” she added, suggesting that there could be a “preponderance on non-fiction films” as they may be easier to turn around post-COVID.

Hosting the debate, Sloss also highlighted chatter about the Oscars potentially having to shift out of the proposed February 28 date, which Deadline has been reporting since April. If they were to delay, they might give a wider berth to both Berlin and Sundance.

“It will mean half the industry doesn’t lave halfway through [our festival] to go do campaign lunches,” noted Jackson.

Sloss also posed the question, if social distancing requirements do remain in place, restricting the number of tickets that can be sold and delegates that can be welcomed, will online screenings be leaned on at these festivals?

“Our first priority is to bring people around movies in a grand cinematic experience,” replied Hernandez. “But I think a lot about people don’t have access to those experiences. That’s a driving aspect of considering how to bring this ‘virtual’ experience, whatever that means. If we can enable that alongside the live experience, that’s going to be a win.”

“In terms of accessibility, if you want your film to reach as many people as possible, people who are not able to come to a very expensive gathering on a mountain, you might see the opportunity of a virtual festival,” added Jackson. “But I don’t know how the money works – it doesn’t seem to me that it’s evident it would destroy the financial model, but it could increase what we see as the value of film, a culturally enriching, beautiful thing. To restrict films to only live festivals in the moment of a global pandemic – we shouldn’t reach that conclusion too quickly.”

Chatrian noted that, because European festivals tend to rely more on public funding than their American counterparts, there is less freedom to how they operate. However, he acknowledged that the Berlinale, which is a hugely popular audience festival and sold 330,000 tickets this year, would face an extra challenge in 2021. “We know next year we won’t be able to offer the same number [of tickets],” he conceded.

“If we can find a way to allow people to fill those seats [left empty by restrictions], to have access to watch films virtually, to create the conversation and community that would have occurred had the festival taken place – that’s something a lot of people are thinking about,” said Sloss. “It’s a shared goal of everyone that as many eyeballs as possible see these films. The question is, what is the most effective way to do that?”

Sloss also suggested that Sundance and Berlin could increase their collaboration in 2021. Eliza Hittman’s Never Rarely Sometimes Always successfully bridged the gap this year, debuting in Park City and then screening in competition at the Berlinale, winning awards at both fests. However, it hasn’t always been a smooth relationship, part due to the Berlinale’s insistence on world premieres for its competition.

“A European premiere in Berlin can be as effective as a world premiere in Berlin,” said Sloss. “It would be great if filmmakers could count on those two festivals to highlight their films in different parts of the world. In a moment where we’re hurting so much, is this an opportunity for Sundance and Berlin to coordinate more to shine a light on those films?”

Both fest directors agreed, though Chatrian noted that he needed to retain a level of world prems for his competition.

“Films come first. As long as we are sure that the combo [Sundance and Berlin] works, we are open to do it. I did it this year with Eliza, and Kelly Reichardt from Telluride [First Cow]. At the same time, I cannot have half of the competition with films that premiered in Sundance, this will disrupt the market in Berlin. I’m sure we will discuss with Tabitha.”

Jackson weighed in with the interesting suggestion that the premiere policy, so regular at ‘A’ festivals, tended to improve diversity of programming. “The insistence of premieres does insure there’s a diversity of films, instead of the travelling circuit of anointed films. There’s value in that.”

Hernandez also discussed what preparations are being taken for his fest’s upcoming edition, including a potential new string of outdoor events, which might be easier to pull off post-COVID.

“If everything goes according to plan, we’ll have a festival that exists in a few different ways this fall,” he said. “Hopefully in our theaters, if we’re allowed, carefully, and in a virtual capacity. And we haven’t talked much about this yet because it’s still in the works, but outdoor and open air will be another new component of this year’s festival. We’re working out a lot of logistics to make it safe.”