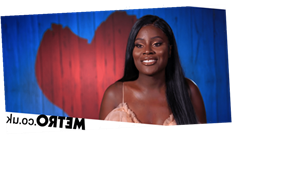 Fans of First Dates Hotel have been left slightly confused over a hopeful who works as a relationship guru – despite the fact she has not been in a relationship for 12 years.

Breeny, who appeared in tonight’s episode of the Channel 4 series, stated that she was an influencer, offering advice about dating and relationships in videos posted to her YouTube channel.

‘One of the dating tips that I give is to know what you want,’ she said. ‘I talk about men who are narcissists, and how to avoid them.’

However, viewers at home were left a bit baffled by this revelation, with some even questioning why she was on the show.

One tweeted: ‘Sorry, sorry. Is the girl who hasn’t been in love or in a relationship for 12 years an “online dating guru?”

‘I’ve been to the zoo so does that make me a vet?’

Another confused fan added: ‘Online relationship guru but can’t find love herself? Isn’t that like a fisherman catching no fish?’

She added that she was dating to find a husband, rather than a boyfriend, and is a firm believer in no sex before marriage, after becoming a devoted Christian at the age of 16.

Unfortunately for Breeny, her date with Bavorary did not go as she would have hoped, as he admitted he did not feel a romantic spark with her.

First Dates Hotel continues next Thursday at 9pm on Channel 4.