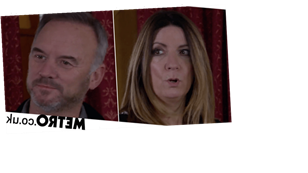 Harriet Finch (Katherine Dow Blyton) gave into temptation during the previous episode of Emmerdale, as she slept with old colleague DI Malone (Mark Womack) in the vestry, and she seemingly gave into her desires once more during tonight’s episode, as she met the dodgy detective at at hotel.

There was chemistry aplenty between Harriet and Malone last week, and when their relationship history came to light, it became apparent that passion was very much going to ensue once more.

And that’s exactly what happened, as the former lovers gave into temptation, and slept together.

Harriet made clear that their dalliance was a mistake, but it was clear that Malone thought otherwise, as he attempted to persuade her to meet him the following day.

During tonight’s instalment, the vicar was wracked with guilt over what she’d done, but at the same time, she struggled to be in Will’s (Dean Andrews) company — especially as he went out of his way to make things up to her, which seemingly made her feel all the more guilty.

An argument ensued between the two, and before long, Harriet found herself in a hotel in Hotten — where Malone was waiting for her in one of the rooms.

It seems as if she’s set to begin a full-blown affair with the bent copper.

Will Will discover what’s going on?

Emmerdale continues Friday 22 May at 7pm on ITV.