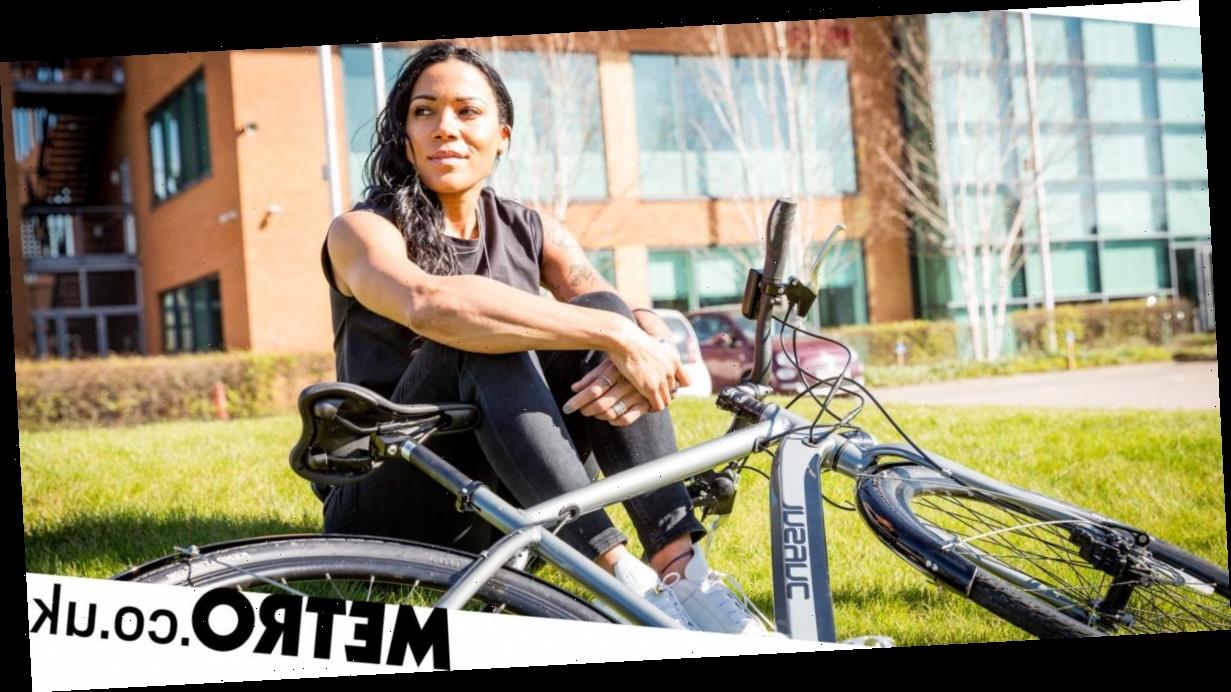 The former elite athlete says retiring from the game hit her hard, and she began to use alcohol to mask her true feelings – she says there were times she felt she ‘didn’t want to be here’.

For Mental Health Awareness Week, the Insync Bikes brand ambassador is sharing how she fought her demons and managed to overcome her mental health problems – with the help of therapy and, quite literally, getting back in the saddle.

The 31-year-old says cycling has been a huge part of her recovery and she is now urging others to use exercise to help strengthen their mental health.

Shanaze is now two-and-a-half years sober and has just launched a personal training business to use her talents to help others.

‘I found that when I got back on the bike, I started feeling better because sport really does help your mental health,’ Shanaze told Metro.co.uk. ‘I ride twice a day now and it’s the best form of therapy I’ve ever had.’

Shanaze suffered her first panic attack aged 18 while at the 2008 Olympic Games in Beijing, having never suffered with mental health issues before.

‘I knew something wasn’t right – my legs went weak – but I didn’t know what was happening, which is what happens when you go through it for the first time,” she said.

‘I realised afterwards it was the stress and pressure I was under with it being my first Olympics.’

When she didn’t reach the success she had set her sights on at the Olympics, she returned home and sank into a depression.

‘I felt low, I felt depressed and I didn’t leave my bedroom – it felt like I was in a black hole,’ she explains.

She credits family and friends with helping lift her out of the hole she was in, as well as setting herself small goals – things as simple as having a shower or going to see friends.

‘If someone had said to me “get back on the bike”, it would have been too big to deal with, it was all about taking small steps,’ she says.

Shanaze’s next battle came following her retirement from cycling three years ago. Having been involved in the sport since childhood, she suddenly found herself wondering what the future held – and that was when she started to drink.

‘I didn’t know what direction to go in life – cycling was something I’d done from the age of ten, so to retire from the sport was difficult,’ she says.

‘I started to use alcohol to mask how I was feeling to the point where I gained a lot of weight and I didn’t want to be here. I was depressed.

‘I think my lowest point was when I caught my reflection in the mirror as I was walking down the high street. I looked and didn’t even recognise myself.

‘I went home and broke down. I felt like I didn’t want to be here anymore. I had to reach out and get help or things could have become so much worse.’

Deciding to seek help, Shanaze went to Alcoholics Anonymous and joined the fellowship.

‘It was the best decision I’ve ever made because it was about more than giving up drink,’ she explains. ‘The fellowship helps you unravel your past and face your demons so that you know what to avoid. I haven’t had a drink now for three years.’

She had been one year sober when British Cycling asked her back out of retirement, something she says she needed to do so that she could leave the sport on her terms.

‘Exercise for me started lifting my mood,’ she says.

‘I was very unfit but joined a cross fit gym in Stockport. I started to feel a part of a community again and I loved it. That, combined with therapy, made the dark cloud start to clear and I could see the light again.

‘It took a long time, but each week I started feeling better and better.’

She won the women’s team sprint at the National Track Championships in 2019, which she said was a mark of being back to the best version of herself.

Now an advocate of cycling as a force for good, through her work as an ambassador for Insync, she believes sport and staying active is essential for good mental health, especially during such difficult times.

‘Times are tough for many people at the moment and cycling is great for ensuring you take care of your mind as well as your body,’ she says.

‘I ride twice a day and it’s great to see so many people out riding – I really hope that doesn’t change when we come out of lockdown.’

Through her personal training business, Body Workshop by Shanaze, which will begin with free workouts live on Instagram, she hopes to inspire others.

‘I’m going to do some online workouts, question and answer sessions and some training drills on Insync bikes that people can do at home,’ she says.

‘You can take your phone to the park or replicate the session at home as best you can, and Insync have some great bikes on offer. It’s so important to be mentally aware. It’s all about being as active as you can to clear your head and I guarantee you’ll finish off feeling much better than when you started.’

Shanaze believes that being strong is about being independent and doing things on your own terms.

‘But above all, it is about not being afraid to be vulnerable and ask for help,’ she adds. ‘Talking about your feelings is a sign of strength, not a weakness.’

Do you have a story of beating the odds and overcoming something with the help of fitness or sport? We want to hear from you.

Strong Women is a weekly series that champions diversity in the world of sport and fitness.

A Sport England study found that 40% of women were avoiding physical activity due to a fear of judgement.

But, contrary to the limited images we so often see, women of any age, size, race or ability can be active and enjoy sport and fitness.

We hope that by normalising diverse depictions of women who are fit, strong and love their bodies, we will empower all women to shed their self-consciousness when it comes to getting active.

Each week we talk to women who are redefining what it means to be strong and achieving incredible things.