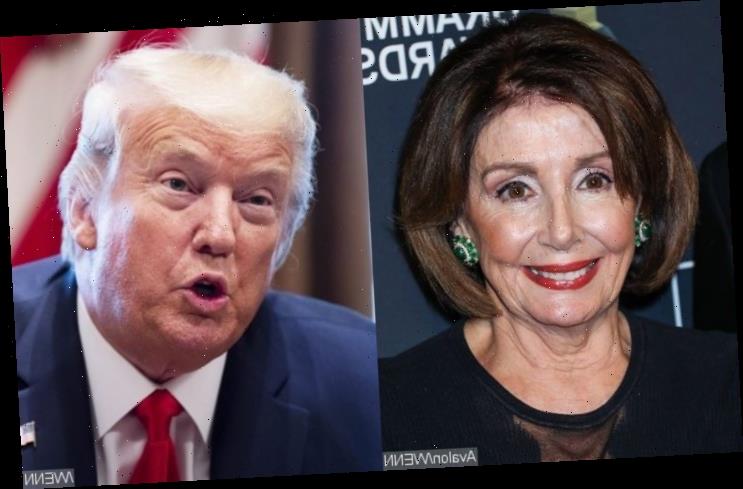 The House Speaker is among those who have been dragging the president for taking the drugs to prevent himself from contracting Coronavirus despite FDA warnings.

AceShowbiz -Nancy Pelosi has inadvertently taken a shot at Donald Trump‘s weight while commenting on the president’s hydroxychloroquine intake to protect against coronavirus. Trump told reporters on Monday, May 18 he has been taking the malaria drug along with a zinc supplement daily “for about a week and a half now” in an attempt to block the virus should he be infected.

During an interview on CNN’s “Anderson Cooper 360″ Monday night, Pelosi expressed her concern over Trump’s hydroxychloroquine consumption which is against the FDA warnings. When explaining her thought on it, she said she would prefer he avoid it due to his “age group” and “weight group.”

“He’s our president and I would rather he not be taking something that has not been approved by the scientists,” the House Speaker said. “Especially in his age group and in his, shall we say, weight group, morbidly obese, they say.”

Hydroxychloroquine has well-documented serious side effects, including severe heart problems. When asked about potential side effects from the drug, he told reporters, “All I can tell you is, so far I seem to be OK.”

Trump said he started taking the drug after receiving a letter from a doctor about the anti-malaria drug’s benefits. “He said out of hundreds of people that he’s treated he hasn’t lost one,” so he claimed. “If it doesn’t work you’re not going to get sick or die. It’s been heavily tested.”

Trump admitted his doctor did not recommend the drug to him, but he requested it from White House physician Dr. Sean Conley. Confirming it, Dr. Conley said in a statement that after “numerous discussions” with Trump about the evidence for and against using hydroxychloroquine, “we concluded the potential benefit from treatment outweighed the relative risks.”

Meanwhile, people have been dragging Trump on social media over his hydroxychloroquine intake. “Whew, I knew The Simpson’s were never wrong. Keep on taking it Trump,” one sarcastically responded. Another similarly added, “Let him take it and with a cold glass of Clorox.”

Meanwhile, one person questioned the doctor’s judgment for administering the drug for Trump despite not having symptoms of related illnes, “he lying. how you taking a drug for 2 weeks that was ORIGINALLY designed FOR LUPUS as a preventive method and YOU DONT HAVE LUPUS. his doctor’s liscense need to be reviewed.”