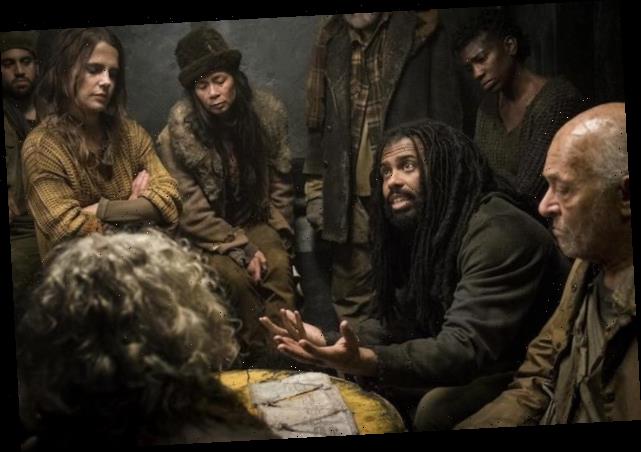 After being in development in one form or another for four-and-a-half years, a Snowpiercer TV series finally pulled out of the station this Sunday. Are you all aboard with TNT’s adaptation?

An adaptation of Bong Joon-ho’s lauded 2013 film of the same name (as well as the 1982 French graphic novel Le Transperceneige), TV’s Snowpiercer stars Daveed Diggs as Andre Layton, one of dozens of unticketed people who clambered aboard the titular train before it began its perpetual circling of a globe that had seven years prior accidentally been frozen by scientists’ attempt to reverse global warming. Layton and his fellow “tailies” in the very back of the 1,001-car train are mulling the timing of their next rebellion against the up-train societies when Ruth (The Americans’ Alison Wright) from hospital arrives to remove him, so that the onetime homicide detective might solve a murder that threatens to disrupt the class system carefully constructed by the Snowpiercer’s reclusive creator, Mr. Wilford.

Upon being whisked up-train by a sublevel rail system (!), Layton meets brakemen Roche (Mike O’Malley) and Till (Mickey Sumner), as well as hospitality chief Melanie (Jennifer Connelly). Though wooed with a favorite meal (grilled cheese and tomato soup, yum), Layton is hesitant to do Mr. Wilford’s bidding unless he can secure certain perks, such as immigration to third class and increased rations. (Later on, he adds to his asks the restoration of reproduction rights to the tail, but that is coolly shot down by Melanie and a pointed allegory about train-grown strawberries).

The first episode only brushes up against the facts of the murder: the vic, among other ignominies, had his penis cut off, which suggests the work of someone copying a years-ago killing… or back then they “put in a drawer” (jailed via coma) the wrong suspect. Layton comes to realize that one POI is none other than Zarah (Sheila Vand), a lady love he begged to board the train with him years ago and who subsequently finagled an upgrade to the bohemian enclave known as the Chains. Layton rules out Zarah as a suspect but is reluctant to do any more detecting for Melanie on the cheap… until a tragic event unfolds in the tail.

After a beloved elder, Old Ivan (Mark Margolis), hangs himself, wannabe rebellion leader Pike (Steven Ogg) pulls the trigger on their planned uprising when the brakeman come to collect the corpse. Led by Pike and one known as Strong Boy, the tailies take out numerous guards, while a little girl makes off with one brakeman’s severed hand and uses it to biometrically open the door to the next car. Then met by a small army led by Commander Grey (Timothy V. Murphy), the uprising hits an impasse, but Pike and Strong Boy hold brakeman Till as a hostage. Layton is brought down-train to talk down his friends, which he does, while also KOing Till so that he can privately communicate to Pike his plan to accumulate critical intel as he navigates the train to solve the murder. Layton then agrees to help out Melanie if the tailies can be spared the suggested life-for-a-life punishment for their attempted uprising. She accepts the deal, but says Mr. Wilford will want “one significant arm” as penance for the brutality. Tune in next week to see who loses said limb!

As for the aforementioned and never-seen “Mr. Wilford”… to the surprise of, I assume, very few of you, the premiere’s closing sequence shows Melanie retiring for the night, changing out of her crisp uniform into a cozy MIT sweatshirt, before claiming command of the train’s mighty engine.