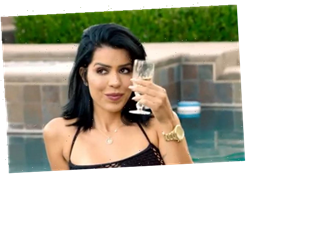 To say that things are not good between Larissa Lima and Colt Johnson these days is an understatement. They had a messy, bitter divorce.

But that won’t stop them from returning to 90 Day Fiance.

TLC is bringing back Larissa and Colt in what I can only assume is a gift specifically for me.

“And the next big reveal for the new season of #90DayFiance: Happily Ever After is….Colt and Larissa!” TLC posted to social media.

“But will they find themselves lucky in love on the second time around?” the teaser, well, teases.

“Keep up the guessing,” TLC tells fans. “We’ll be dropping hints for all the returning couples every day at noon.”

Larissa Lima herself took to Instagram on Monday afternoon to echo the news.

“As many of you already know,” she teases, “I’ll be on the next season of 90 Day Fiance Happily Ever After?”

“Be sure to watch and find out what is going on with my immigration, court, and love life!!” she recommends.

“I can’t talk about these things now,” Larissa acknowledges, making reference to TLC requiring her to not “spoil” details of her own life.

“But soon you will find out all sorts of things about my life,” she adds.

“I wish to extend a special Thank You to all the 90 Day Fiance crew and producers that work so hard” Larissa expresses.

She concludes: “It was the best to be filming with you all again!”

As for this season’s subject matter … be warned, not all of this will make it into the show, and it’s not for the faint of heart.

On the night of January 10, 2019, Larissa and Colt got into their final fight.

We’ve heard multiple versions of what went down, but Larissa ended up with injuries on her face and torso.

She accused Colt of tormenting her despite her begging him to stop.

Larissa fled the house and put as much as she could on social media.

She then went and stayed at the home of her friend, Carmen Nys, who provided her with shelter for many months afterwards.

Colt, however, accused Larissa of assault, something that she seemingly confirmed when she admitted to scratching his lip.

Larissa maintained that she scratched him in self defense. Colt’s photo was shared with 90 Day Fiance blogger John Yates.

On January 11, that very next day, Larissa was arrested.

Her previous arrest had been dubious (police were called on her behalf, but Colt said something to them that made them arrest Larissa).

However, it was apparently enough for the police to be Team Colt. Carmen ended up bailing out Larissa that afternoon.

Why did we rehash all of that? Mostly because we doubt that we’ll be seeing much of that at all on this season.

Instead, the focus appears to be on what happened afterwards.

Debbie was of course in a celebratory mood, delighted to have Colt back.

Colt’s arc this season won’t be all about Colt’s Norman Bates impersonation.

But clearly, Debbie is delighted and is not even pretending to hide it. Amazing how toxic a family can become in a short time.

Before we get into Colt’s next act, Larissa triumphantly announces to her friends that she has completed her community service.

We here at THG covered Larissa’s legal battle extensively. It has been almost one year.

Larissa’s community service included speaking on a telephone line for the transgender community, which was a wonderful and thoughtful use of her time.

And as we can all see in the teaser, Larissa was glad to put that court case and its ramifications behind her.

What’s next? Well, we know that Larissa dated Eric Nichols, a major upgrade from Colt, starting in February of 2019.

Some viewers may remember seeing him on the Tell All last summer.

Larissa was not the only one who moved on, however.

Colt dipped his own toes back into the dating world, as you can see creepily play out on this teaser.

We give Colt a hard time for this because his exes have.

A woman whom he dated before Larissa called him out early in their first season for being a creep, expressing pity for Larissa.

At least one of the women whom Colt dated has accused him of toxic, manipulative behaviors and exacting revenge upon exes. Gross.