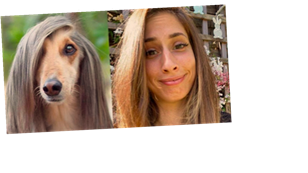 Stacey Solomon was thrilled with her freshly-washed hair after a week off, but didn’t get the compliment she may have been expecting from boyfriend Joe Swash.

As she swished around her hair after a wash and blow-dry, 30 year old Stacey was shocked as Dancing on Ice winner Joe compared her to a "sexy" Afghan hound.

On her Instagram stories as she and Joe sat together in the sunshine while baby son Rex was asleep, Stacey said: “Can you believe I've washed my hair. It's beautiful isn't it?"

Joe, 38, replied: "You look like a sexy Afghan hound”, to which Stacey looked at him in shock.

She wrote over the clip: “What kind of compliment is that? A sexy Afghan hound?”

However, the Loose Women panellist seemed to come around to the idea of her unlikely doppelganger, as she then shared a picture of herself and an Afghan hound side-by-side.

She wrote: "He may be onto something. I actually love this dog so much. It really was a compliment."

Stacey revealed her plans to make her freshly-washed ‘do last her a few weeks in lockdown, as she shared a sweet picture of herself and 11 month old Rex to her Instagram grid.

The mum-of-three wrote: “Just Because The new nose scrunch is my favourite. And because I had to have one picture on the grid with my clean, dry, Afghan Hound hair do. [sic]

"I’m going to try and make this last a few weeks, who knows when I’ll get the opportunity to wash & dry it again. I hope you’re all okay, thinking of you always… Happy Sunday everyone. Love you.” [sic]

Just days ago, Stacey showed off an adorable video of her Rex taking what she believes is his first steps as he danced around to an S Club 7 song.

As Rex, who was wearing a rainbow onesie, dances around swinging his arms and wiggling his hips, he appears to take a step forward.

Proud mum Stacey gushes: “Clever boy," at her son as he flashes a huge smile before falling to his knees and putting his head on the furry rug.

Sharing the video on her Instagram story, Stacey wrote: "Disco pickle" and added: "I think we may have just had a first step.”

Along with Rex, the Loose Women star is also mum to sons Zachary, 12, and Leighton, eight.

It comes as Stacey admitted she wants to marry Joe after seeing him bond with her eldest son Zachary and attempting to bake a cake.

Stacey told her 3.3million followers: "Pickle is in bed and now these two are baking a chocolate cake. I love how much he loves our pickles".

Unable to hold herself, Stacey sang: "I love them so much," as she zoomed in on the pair. "This make me wanna marry you," she added, moving closer to Joe.