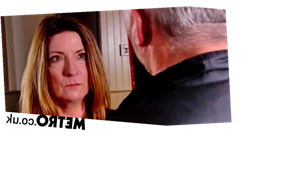 The fact that Harriet Finch (Katherine Dow Blyton) and DI Malone (Mark Womack) knew one another upon the latter’s arrival in Emmerdale raised plenty of questions, and during tonight’s episode, the nature of their former relationship was finally revealed.

Harriet conducted a choir practice session in the church, but she didn’t know that Malone had managed to sneak in, and thus he watched the musical performance from afar.

When she came to realise he wanted a word, the vicar did what she could to get rid of her parishioners, before confronting the dodgy detective.

As they discussed matters, their history came to light, and it became apparent that there was more to their relationship that one initially thought, as Malone revealed that he was in love with Harriet — and that he’d left his wife for her.

However, once he did so, he discovered that Harriet had put in for a transfer, and left the station they worked together at.

Harriet claimed that their relationship wasn’t all that important, but the apparent chemistry between them suggested otherwise.

Will they rekindle their romance?

It appears that the answer to such a question will be yes, as — next week — Harriet is wracked with guilt following her dalliance with the copper.

Emmerdale continues Friday 15 May at 7pm on ITV.