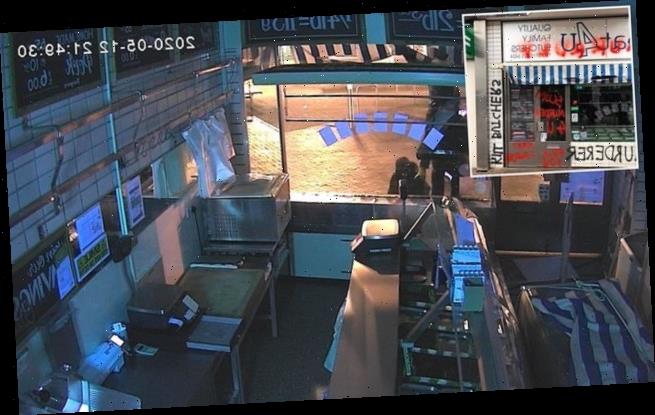 Militant vegans branded a local butcher a ‘murderer’ and ‘scumbag’ when they defaced the front of his shop, causing £2,000 of damage.

The trio used spray paint to daub phrases like ‘Kill butchers’, ‘murderer’ and ‘meat = murder’ as well as swear words on the front of Meat 4 U. 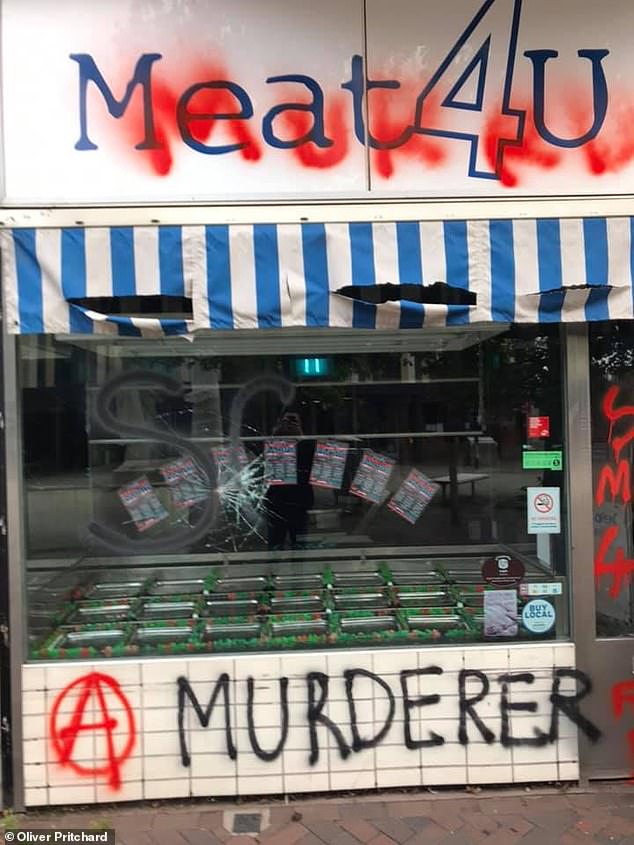 Spray paint was used to daub phrases like ‘Kill butchers’, ‘murderer’ and ‘meat = murder’ as well as swear words on the front of Meat 4 U in Nottingham 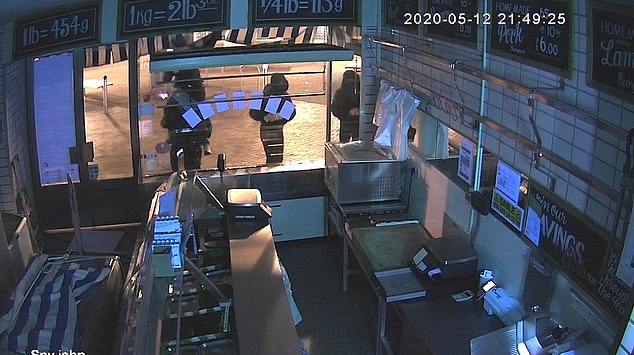 Three masked activists were caught on CCTV outside the store, which was forced to close for a day after the attack

Meat 4 U in Nottingham was vandalised on Tuesday night, pictured left, but has since been cleaned up and has reopened for business today, pictured right

They also smashed the main window, slashed the canopy and put glue into the locks.

Liberate or Die has since claimed responsibility – and one activist even shared a grinning selfie he took while the shop was vandalised. He has denied being involved in any criminality when approached by the butcher.

But Mr Whittle, who runs Meat 4 U with business partner Nicholas Henshaw, wouldn’t let their criminal actions close his store.

Matt Whittle, pictured, said he’d lost a day of trade as a result of the incident

The 42-year-old spent all of yesterday fixing the damage before opening up as normal today.

The father-of-three said: ‘We’re back open as normal but we’ve lost a day’s trade and a bit of elbow grease but you’ve got to get on with it.

‘Vegan rights activists have claimed responsibility. They’ve put it all over their website.

‘It was a surprise to us because we’ve never had trouble with them before. But I guess we’re just an open target in the main square.

‘The ironic thing is we don’t kill animals here. I personally hate abattoirs – I went to one when I was 14 and I hated it. I don’t like killing animals but at the end of the day this is my business and people eat meat.

‘There are a lot of students in Nottingham. They’re probably students and mummy and daddy are paying for their education. They haven’t got any responsibilities and don’t care but I’ve got three kids at home.’

Mr Whittle, who has been a butcher since he was 13, said he doesn’t have an issue with vegans and said many vegans themselves have got in touch to say they condemn the group’s actions. 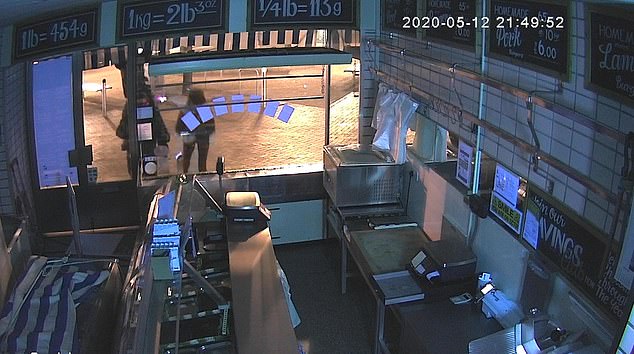 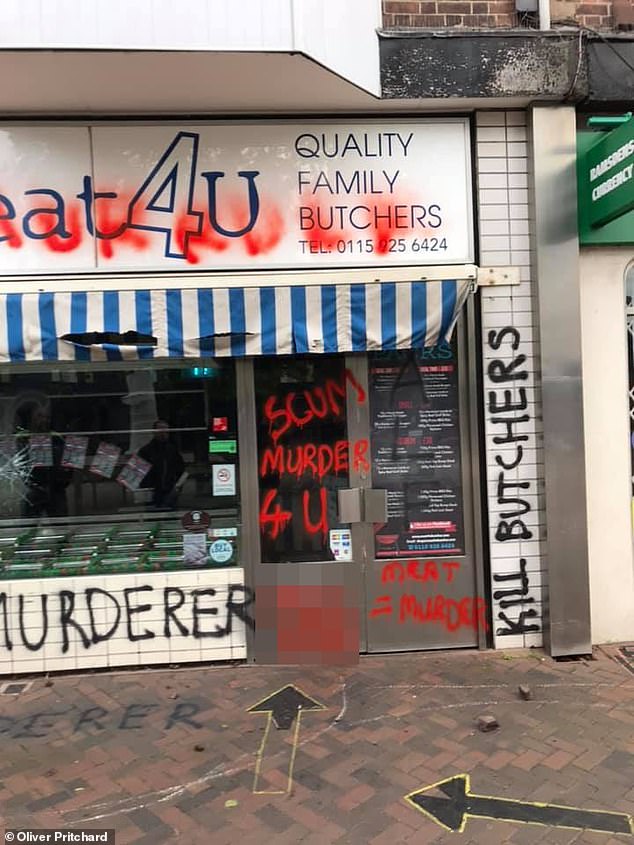 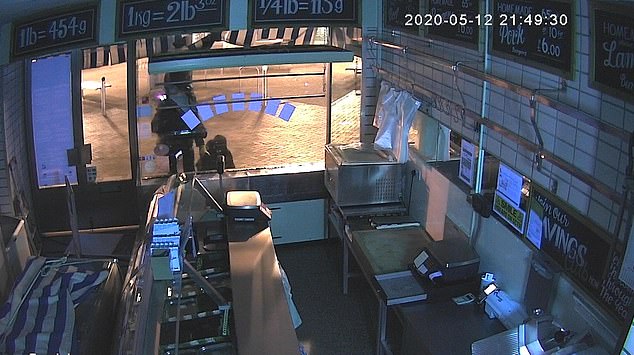 He added: ‘At the end of the day it’s the same as with anything. If you want to do something then do it but don’t force your opinion on others. Each to your own.

‘If that’s what you want to do then fine I haven’t got a problem with that but don’t go and vandalise my shop.

‘I’m 99.9% it’s a lad and two girls – you can tell from the CCTV. We’ve had a tip off from another vegan who sent us the picture of the guy taking a selfie when they’re vandalising the shop. I’ve spoken to him by text and he said it wasn’t him.’

Mr Whittle said he has been analysing his CCTV footage which shows the incident happened around 9.48pm on Tuesday night, and can make out three figures.

In a statement on its website, Liberate or Die wrote: ‘Economic sabotage is a really important tool in the arsenal of animal liberationists. We need to hit these scumbags on every level and destroy the businesses that profit off the killing of animals. By smashing their glass we are smashing their profits.

‘Anyone can do this. The reason we post these actions is to inform and motivate others to do more. If we hit these industries at every level and consistently their insurance goes up and ultimately insurers won’t want to touch them.

‘We also send a clear message with these actions.’ 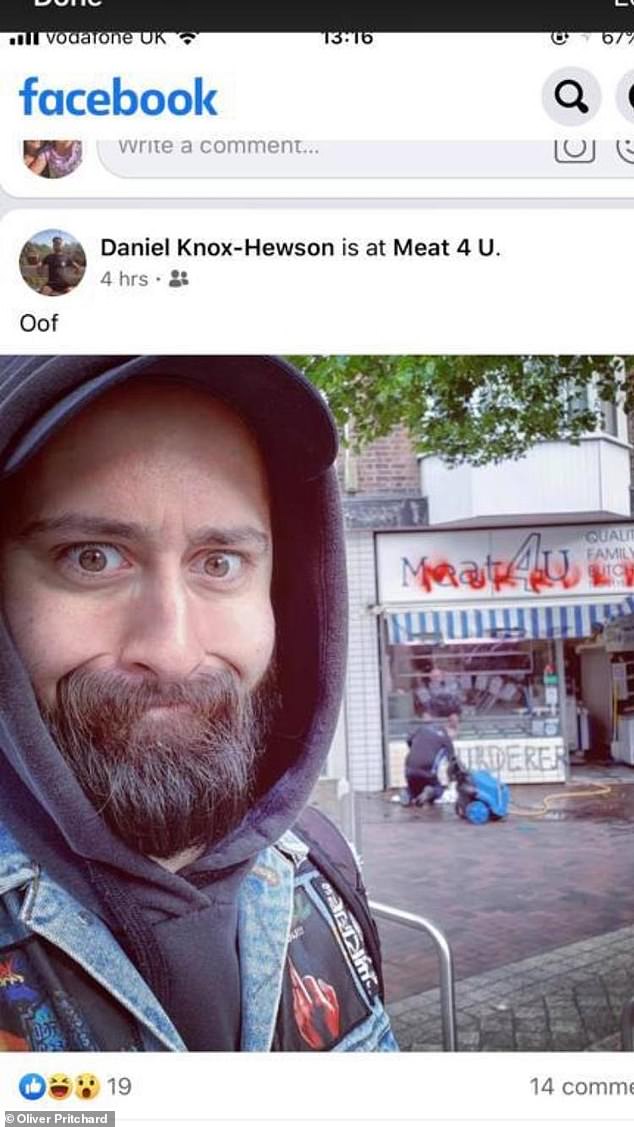 A spokeswoman for Nottinghamshire Police said: ‘We’re investigating an incident of criminal damage at a shop in Beeston.

‘We received a call just before 6am [on Wednesday] that Meat 4 U in High Road had been vandalised.

‘It’s believed to have happened overnight. Windows have been smashed, blinds slashed and spray paint has been used on the shop front.

‘Officers have begun enquiries and are appealing to anyone with any information that could help to contact us on 101 quoting incident 78 of 13 May, you can also call Crimestoppers anonymously on 0800 555 111.’