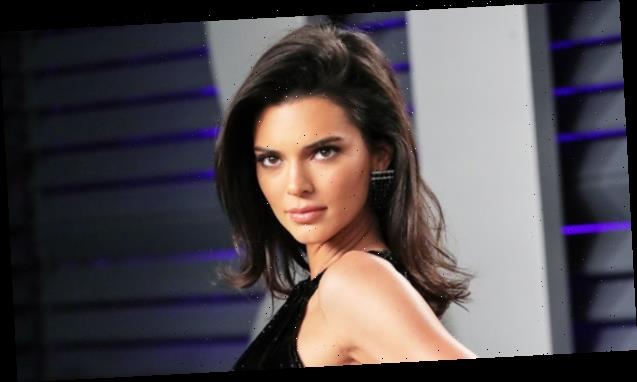 Kendall Jenner had a surprise for her 128 million Instagram followers: a sultry selfie in a black lace teddy! Kylie especially didn’t take the photo for granted, gushing that this was ‘rare Kendall content.’

Kendall Jenner, 24, is not one to post on Instagram everyday. But when she does, she makes it count — such was the case when the model shared a photo that looked straight out of a French boudoir photo shoot on May 12. Kendall was the perfect balance between sexy and sophisticated in a strapless black lace teddy while she posed on her bed, making that nonchalant facial expression that’s trademark to her effortless aesthetic. “Did my makeup n stuff,” she casually wrote in the caption.

“This is rare kendall content !!!!!!,” Kylie Jenner, 22, wrote under her sister’s photo. Like Kylie said, it’s not everyday that Kendall drops a steamy lingerie photo — explaining herself, Kendall simply responded, “quarantine.” Khloe Kardashian, 35, was just as impressed; she gushed, “Wow wow wow.” The thousands of other comments were just as complimentary, but two stood out for their cleverness. “Ummm who you zoomin’ with?,” celebrity hairstylist Jen Atkin wrote, and Kendall’s BFF Hailey Baldwin chimed in: “me.”

Kendall has been isolating separately from her sisters, but she did appear to reunite with Kylie to film a clip for Justin Bieber and Ariana Grande’s quarantine-themed music video for their collab “Stuck With U.” The celebrity-packed video dropped on May 8, and the sisters playfully danced with one another on the tennis court at Kylie’s new and lavish $36.5 million Holmby Hills mansion. Kendall also gave fans a peek at what her “social distancing” looks like on the May 1 episode of her Beats 1 Radio and Apple Music radio show, Zaza Boys, which she co-hosts with DJ Daniel Chetrit.

did my makeup n stuff

Before Tuesday’s teddy photo, Kendall’s last Instagram post was a rare video clip of her mom Kris Jenner, 64, playing tennis in a hot pink bikini. It served as a reminder where Kendall gets her supermodel genes (and posing skills) from!