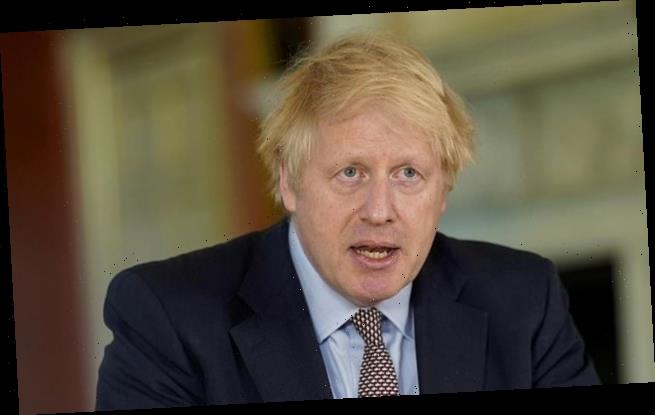 DOMINIC SANDBROOK: Our briefly united kingdom is already being torn apart by the agonies of lifting the lockdown

Just seven weeks have passed since some 27 million of us tuned in to watch Boris Johnson’s announcement that Britain was entering lockdown. Yet today the mood could hardly be more different.

When the Prime Minister addressed the nation on March 23, there was, amid the shock and anxiety, a palpable sense of national unity.

As he told us at the time, we were all ‘enlisted’ in a national campaign against coronavirus. And for a few weeks, at least, old enmities were put aside, as the British people rallied to meet the challenge. 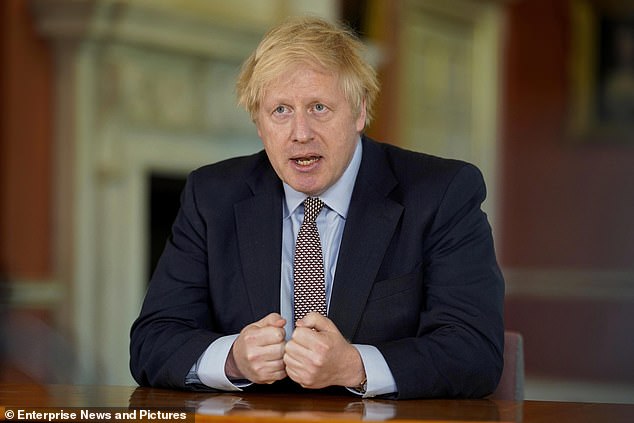 We’re often told that we are a uniquely greedy and selfish lot. But the behaviour of millions of ordinary Britons in the past few weeks says otherwise. The Prime Minister is pictured above delivering a TV address to the nation on Sunday night

But nobody could say the same about the reaction to his latest national address on Sunday night.

Mr Johnson had barely finished before the whingeing and backbiting started. Yesterday’s airwaves, from the BBC’s news output to the glossier breakfast shows, were full of little else.

The basic message was, apparently, too complicated for our puny minds. The Scots didn’t like it. Neither did the Welsh, or the Northern Irish.

Some of this, I suppose, was inevitable, and the Government only has itself to blame. In recent days its communications strategy has strayed off course, with mixed messages and a lamentable vagueness. 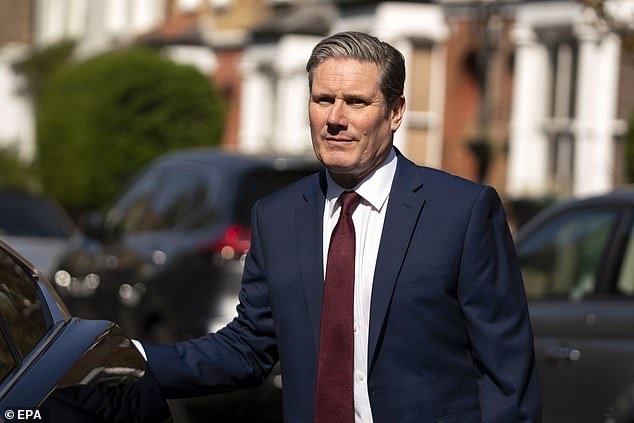 Having spent the past few weeks moaning that the Government was not treating people like adults, Mr Starmer toured TV stations yesterday complaining that the new advice was too complicated

Yesterday, there was confusion about some of the fundamentals, such as when the new measures will come into force and how they will be implemented (later clarified in a 50-page document).

There’s a wider point we must acknowledge, too. At the start of the crisis, ministers were keen to stress that we were all in it together, confronting the same threat and shouldering the same burden.

But as the data now being accumulated shows, that was at best only half true. By its very nature, the virus has divided us by age, race, gender and even class. It leaves the young virtually untouched, but scythes through the elderly with pitiless cruelty.

If you have an underlying health condition, or are fat and unfit, then you have extra reason to worry.

And as it’s easier for middle-class professionals to work from home than, say, frontline care workers, transport workers or those in the building trade, it’s hard to deny that there’s a class division, too. 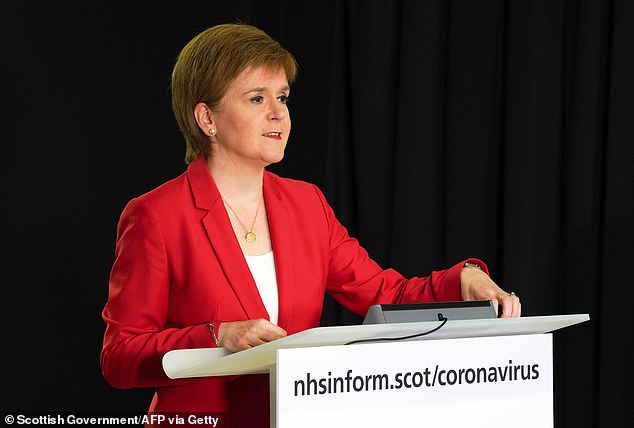 The basic message was, apparently, too complicated for our puny minds. The Scots didn’t like it. Neither did the Welsh, or the Northern Irish. First Minister Nicola Sturgeon is pictured above

All of that said, it has been heartening to see how society has come together to transcend these differences. We’re often told that we are a uniquely greedy and selfish lot. But the behaviour of millions of ordinary Britons in the past few weeks says otherwise.

That is not the case for everybody, though. For while the crisis has illuminated the generosity of countless quiet, unsung people, it has also shone an unsparing light on the fault lines running through our political culture.

To take merely the most obvious example, it seems barely believable that while the British government has moved on to the ‘Stay alert’ message, the Scottish government vociferously refuses to do so.

It’s true that for a few weeks Nicola Sturgeon put on a show of national unity, but all the time she was clearly itching to revert to type.

She is like the scorpion in the Russian fable, which stings the frog carrying it across a river, even though it means they will both drown. It’s in her nature to foster division and rancour, and she can’t help it.

Much the same is true of the new Labour leader, Keir Starmer. Having spent the past few weeks moaning that the Government was not treating people like adults, Mr Starmer toured TV stations yesterday complaining that the new advice was too complicated.

Like Ms Sturgeon, he seems determined to oppose merely for the sake of it.

What neither of them has the honesty to admit, though, is the intractable difficulty of the Government’s position. If we come out of lockdown too soon, there is a terrible risk of provoking a second spike in the virus.

For example, in Germany — the European nation judged to have best-handled the virus — a recent relaxation of the lockdown has seen the infection’s reproduction rate surge back above 1, the level at which cases rise exponentially.

We can’t afford a similar scenario here, hence the slow progression out of lockdown, rather than a soaring leap.

Yet at the same time, life has to go on. We didn’t go into lockdown during the Spanish flu pandemic a century ago. This decision came at a human cost, but it was right all the same.

Now, as then, we can’t stay in hibernation for ever. The longer the economy remains becalmed, the more damage we suffer in the long run, with severe repercussions for NHS funding and public health further down the line.

Is there an easy answer to this? No, of course not.

No government since 1945 has faced such a colossal challenge. Indeed, in some ways the virus is a much more daunting adversary than the Nazis, because of the sheer complexity of tackling it on so many fronts.

Yes, of course the Government has made mistakes, most notably on testing, the provision of PPE and management of the care homes crisis.

But Spain, Italy, Belgium and even the U.S. haven’t got it right either. 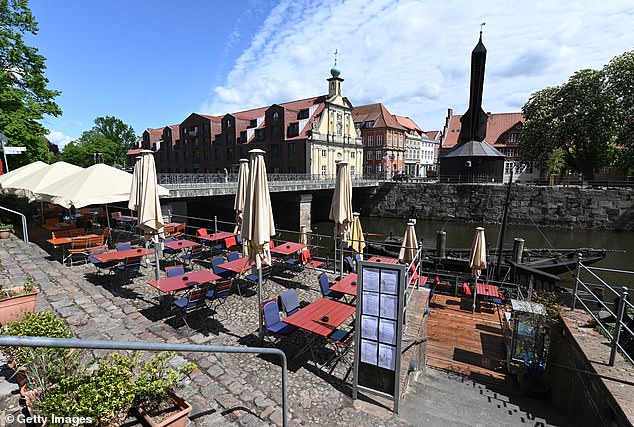 For example, in Germany — the European nation judged to have best-handled the virus — a recent relaxation of the lockdown has seen the infection’s reproduction rate surge back above 1, the level at which cases rise exponentially. The town of Luneburg in Lower Saxony, Germany is pictured above

At first, I wondered how people could be so tastelessly cynical.

But then I noticed that many of these great experts on tackling pandemics are precisely the same people who, a year ago, were loudly predicting that Mr Johnson would never get a new deal from the EU, and that Jeremy Corbyn was poised to lead us into a socialist utopia.

In the past few days, it has become blindingly obvious that they have never got over their humiliation in the General Election, and see the current emergency as an opportunity to sow division and promote their infantile brand of Left-wing extremism.

If you doubt it, catch up with the BBC’s shamelessly partisan Panorama programme from a few weeks ago, where the producers lined up a series of Left-wing medics and nurses — every one a Labour activist or supporter — to bash the Government.

I believe that the vast majority of us recognise that the Government is muddling along in the most challenging of circumstances.

Most of us also recognise that, even when we’re out of lockdown, the road to recovery will be long and arduous.

But if we are fractious and divided even before we set off, then the journey will be a thousand times more difficult.

So with VE Day so fresh in the mind, perhaps ministers should revive one of the most famous poster campaigns from the wartime struggle.

There were various pictures, but the slogan was always the same: ‘Careless Talk Costs Lives.’

And perhaps the critics and conspiracy theorists should take a moment to reflect on those words — then have the decency to stop whining.

As for the controversial ‘Stay alert’ message — well, after weeks of complaining that ministers weren’t treating us like grown-ups, it’s a bit rich to start moaning when they do! 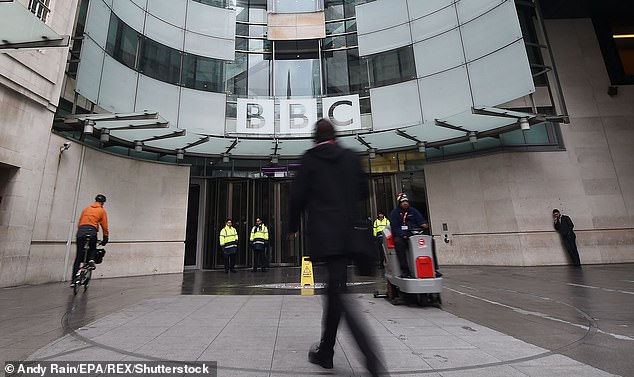 If you doubt it, catch up with the BBC’s shamelessly partisan Panorama programme from a few weeks ago, where the producers lined up a series of Left-wing medics and nurses — every one a Labour activist or supporter — to bash the Government