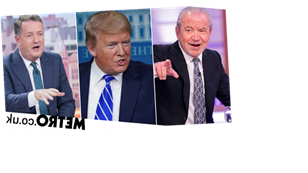 Because that’ll show him?

The Apprentice host and Good Morning Britain’s Piers have been at odds for years, but their feud seems to have been kicked up a notch amid the coronavirus pandemic, with the pair of them having differing views.

And it seems Lord Sugar isn’t above using their row to secure himself a presidential follow.

‘Dear @realDonaldTrump I hear Piers Morgan has been rude to you,’ he wrote.

‘If you wish to upset him tell your 19m followers to follow @lord_sugar the man who does the Apprentice in the UK.’

The two presenters have been clashing, with Lord Sugar recently slamming Piers for taking a coronavirus test despite him being entitled to one as a key worker.

In a tirade on Twitter, he wrote: ‘He deprived real essential workers from a test. If this was Hugh Grant, Meghan or other of his enemies like me. He would be howling from the rooftops. HYPOCRITE.’ (sic)

‘Frankly @piersmorgan has shot himself in the foot,’ Lord Sugar went on to add. ‘He would have done better saying nothing and not mention testing.

‘And then I see the disinfectant, where it knocks out in a minute, one minute, and is there a way we can do something like that? By injection inside, or almost a cleaning.

‘As you see, it gets in the lungs, and it does a tremendous number on the lungs. So it would be interesting to check that.’

He later claimed he was being sarcastic.

After his comments, Piers noted that Trump had then unfollowed him on Twitter.

Sharing the news, Piers took to Twitter and said: ‘UPDATE: President ⁦@realDonaldTrump⁩ has unfollowed me on Twitter, hours after I wrote this ⁦@DailyMail⁩ column.’