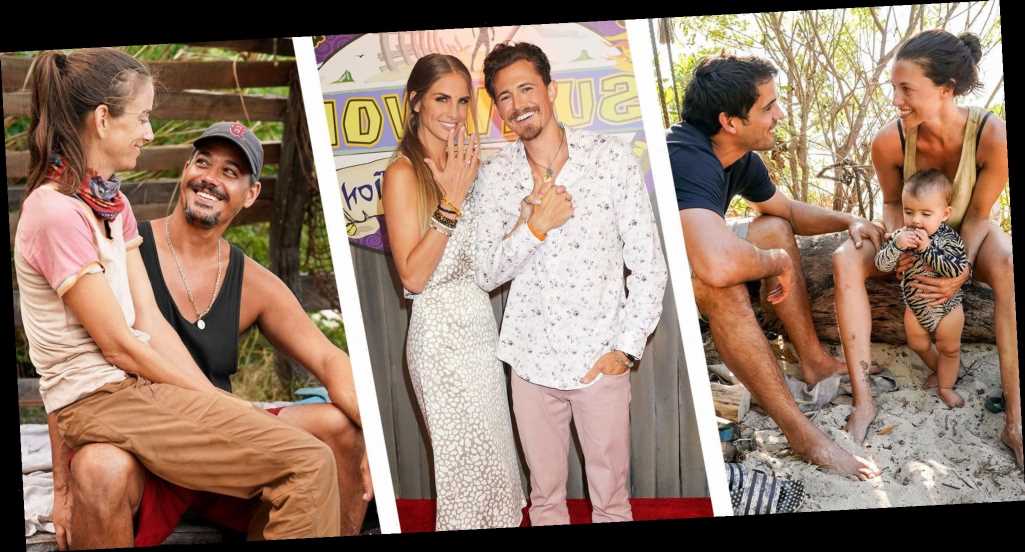 Survivor is one of the toughest reality TV competitions out there, and the amount of backstabs, blindsides, and sometimes outright dirty gameplay we’ve seen on the show are uncountable. But even in the midst of all of this, relationships have blossomed on the show, and there are a number of Survivor couples that have left the long-running CBS series with a life partner.

While Boston Rob and Amber are arguably one of the most popular Survivor couples, there also some pairings that you may have forgotten about. Here are the 9 Survivor couples that are still together.

15 years ago today two kids that met on a beach on @survivorcbs got married! I love you.❤️Forever and Ever and Ever❤️?❤️

Laughter is the best medicine — I love you honey. You funny ❤️ — ? @abipoephoto

While Parvati and John have never appeared on a season of Survivor together (she’s been on Cook Islands, Micronesia, Heroes vs. Villains, and Winners at War, while he competed on Samoa), fans got a glimpse of their relationship when John appeared on Winners at War during the family visit.

The couple initially connected through mutual Survivor buddies, with Parvati telling ET that they met “in the carpool on our way to play in Ethan Zohn’s Grassroot Soccer charity game in LA in 2013. Aras [Baskauskas] was driving, Nate Gonzales was riding shotgun, and John was sitting next to me. When we scooped up Ozzy [Lusth], John slid into the middle seat, and I remember being struck by how comfortable he felt to me. I was drawn to him instantly.” The couple got married in 2017, and their daughter Alma was born in 2018.

Couldn’t be happier to be quarantined for life with you ?‍♂️? @sierra_dawn_ truly life’s a blur and you bring it all into focus. ?✨???????? @forevermorefilms

Joe and Sierra met during Worlds Apart in 2014, but they didn’t start dating until around 2016 or 2017, after Joe had made a second Survivor appearance on Cambodia – Second Chance and Sierra was back from filming Game Changers. Joe later went on to appear on Edge of Extinction, and Sierra often posted supportive messages for him when the season aired.

The couple got engaged in April 2019, and they became husband and wife in November 2019. They currently reside in Utah.

While Tyson and Rachel didn’t meet because of Survivor, their Blood vs. Water love story has made them one of the most popular couples from the show. Tyson had previously appeared on Tocantins and Heroes vs. Villains before Blood vs. Water, and he said that Rachel’s elimination helped him power through to the end and win. Tyson and Rachel later appeared on Marriage Boot Camp: Reality Stars 2 in 2014, and Tyson proposed to her during the show’s finale. They got married in 2015, and their wedding was officiated by Tyson’s fellow Tocantins castaway Stephen Fishbach. Tyson and Rachel now have two children together, and they all appeared together during the family visit on Winners at War.

Woke up this morning feeling extremely grateful to have this one by my side. #silverlining

Elizabeth and Jack appeared on Island of the Idols in 2019, and they announced they were dating shortly after the finale of their season premiered.

Ghost Island brought Sebastian and Jenna together in 2017, and Sebastian told Reality TV World that the couple felt sparks from the very moment they met on the plane to Fiji. “We sat next to each other on the plane in the back of the jumbo jet, and we talked the entire 13-hour flight —the entire flight,” Sebastian said. The duo kept their romance private during the season, but they went public after filming, and they now run a YouTube channel together called Tarzan and Jen.

1st photo challenge – this was right after we’d been voted out, but was still at ponderosa…almost 9 years ago!! @survivorcbs #throwbackthursday #TBT #throwback #survivor #keithney #survivorsouthpacific

Whitney and Keith met during South Pacific in 2011, and host Jeff Probst revealed that they were dating during the show’s finale episode—but it turned out Whitney was still legally married to then-husband Donny Fallgatter. Whitney and Donny’s divorce was finalized in November 2011, and Whitney and Keith got engaged on Valentine’s Day in 2013. The couple competed on the twenty-fifth season of The Amazing Race in the spring of 2014, and they got married in July 2014.

? Erik and I celebrated our 11th wedding anniversary this week. It consisted of tacos and Netflix. I’m incredibly grateful he was home with us and is still healthy. This past month has been TOUGH. I’m proud of Erik for taking care of those in need. In the midst of the coronavirus pandemic, I’m reminded every day that we owe a profound debt of gratitude to all our health professionals & first responders. To all of you: Thank you for keeping us safe and coming to our rescue in times of need. We see you and appreciate you. To every other everyday hero out there doing good in our community and helping us navigate this new normal, thank you. We wouldn't be here without you.

Erik and Jamie competed on China in 2007, and they became close during filming. They got married in 2009, and they have a son together. Incredibly, Erik and Jaime are actually the first pair of Survivor contestants from the same original season to marry each other.

Alex is from The Amazon, while Kim appeared on Africa, and they met through the show in 2005. They got married in 2006, but neither is public with their relationship.